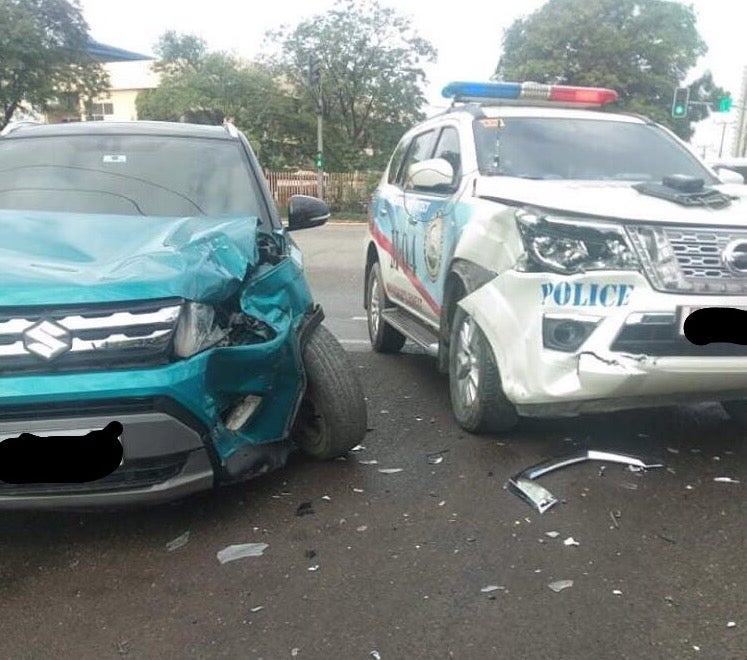 A look at the damaged front ends of a private vehicle and a police car after a vehicular accident in Barangay Centro in Mandaue City on Monday morning, June 7, 2021. | contributed photo Dennis Mangubat

MANDAUE CITY, Cebu—Human error was said to be the reason behind the vehicular accident involving a Nissan Terra police car and a Suzuki Vitara SUV at the intersection of SB Cabahug Street and A. Soriano Avenue in barangay Centro here on Monday morning, June 7, 2021.

Police Lieutenant Colonel Mercy Villaro, spokesperson of the Mandaue City Police Office (MCPO), said that based on the investigation conducted and supported by CCTV footages from the Mandaue City Command Center, the Rey Porcia Erana, the driver of the Vitara, was at fault as he encroached the lane of the police car that resulted to the collision.

Villaro said Erana was going to Cebu City while Patrolman Kemp Lowell Zamora Tumacas, currently assigned at the Mobile Patrol Unit of the MCPO and the driver of the Terra police patrol, was heading towards the Mandaue City hall when the accident happened.

Here’s another look at the accident, this time showing the traffic light from the police car’s lane:

Villaro said Erana admitted his mistake and promised to shoulder the damage to the police car.

None of the drivers was injured in the accident that happened at around 7 a.m.