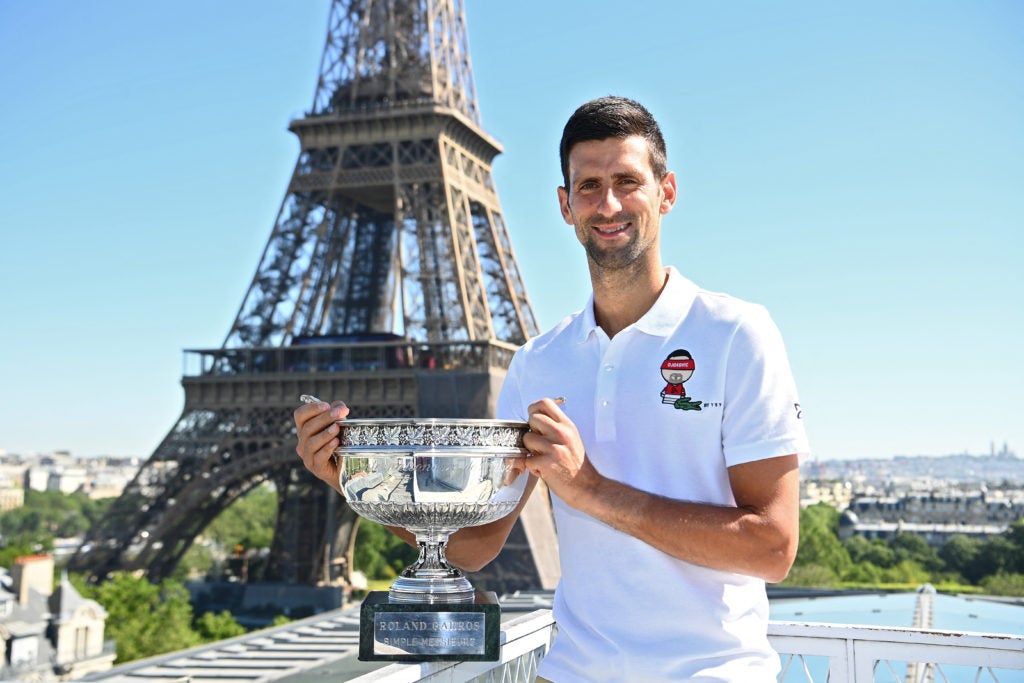 Serbia’s Novak Djokovic poses with the trophy in front of the Eiffel tower, on June 14, 2021 in Paris, during a photocall one day after winning the Roland Garros 2021 French Open tennis tournament. | Photo by Christophe ARCHAMBAULT / POOL / AFP

Paris, France—Novak Djokovic has set his sights on the Golden Grand Slam of all four majors and the Olympic title, insisting: “Everything is possible”.

It allowed him to become the first man in the Open era, and only third in history, to claim all four Grand Slam titles on multiple occasions.

Now he has targeted being the third man to complete a calendar Grand Slam after Don Budge in 1937 and Rod Laver in 1962 and 1969.

On top of that, he also wants the Olympic gold medal to complete the Golden Grand Slam.

“Everything is possible. Definitely in my case I can say that what I’ve been through in my career, in my life, this journey has been terrific so far,” said Djokovic.

“I’ve achieved some things that a lot of people thought it would be not possible for me to achieve.

“So everything is possible, and I did put myself in a good position to go for the Golden Slam.”

The Golden Slam has never been achieved by a man while, in the women’s game, only Steffi Graf in 1988 has swept all four majors and Olympic gold in the same year.

In Graf’s case, Olympic gold came in Seoul. For Djokovic, the opportunity will come in Tokyo later this summer.

“Obviously his goal and our goal is to win the Olympics and then win the Grand Slam. That would be the absolutely top of this year,” said Djokovic’s longtime coach Marian Vajda.

“But it’s still far away from us. We have to still focus on the next one. But overall he’s set up for this year.

“His priority is Wimbledon, Olympics and US Open. I think that says all.”

Djokovic is already halfway to a calendar Slam having secured a record ninth Australian Open in February.

Next up is Wimbledon, where he is the defending champion, Olympics and then a bid to win the US Open for a fourth time.

“As much as Novak is healthy, and he’s healthy right now, he’s in great shape, I think he has the ability to win the Grand Slam for this year. I’m pretty sure,” added Vajda.

“I think it is much more than possible. He loves to play in Wimbledon and US Open.”

However, Djokovic has been at this juncture before, winning in Australia and Paris in 2016 but coming up short at the Rio Olympics, Wimbledon and the US Open later in the year.

“I was in this position in 2016 as well. It ended up in a third-round loss in Wimbledon,” added Djokovic recalling his shock exit to Sam Querrey at the All England Club five years ago.

He has also collected 36 Masters, a Davis Cup and has spent more time at world number one than any other player.

But for two sets on Sunday, he was thoroughly outplayed by 22-year-old Tsitsipas before the Greek’s challenge fell apart.

Djokovic left the court after the first two sets to compose himself just as he had done in his come-from-behind wins over Lorenzo Musetti and 13-time champion Rafael Nadal.

“My guardian angels are there. I have my special corner. It’s a secret. I can’t reveal the secret. It’s been working for me pretty well,” he said.

“With this victory Novak Djokovic made history, becoming the only player in the Open era to have won each of the Grand Slam tournaments at least two times,” added state-run RTS television.

Read Next
DOH-7: We did not defy IATF protocols