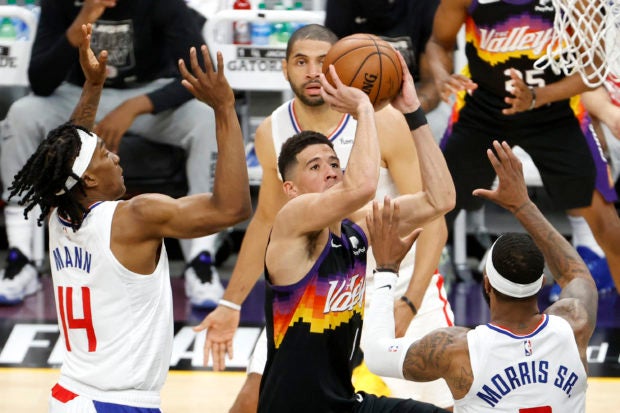 Devin Booker of the Phoenix Suns shoots against Terance Mann and Marcus Morris Sr. of the Los Angeles Clippers in the second quarter during game one of the Western Conference Finals at Phoenix Suns Arena on June 20, 2021 in Phoenix, Arizona. (Getty Images via AFP)

LOS ANGELES – Devin Booker delivered a 40-point triple double as the Phoenix Suns shook off some playoff rust to beat the fourth-seeded Los Angeles Clippers 120-114 in the opening game of the Western Conference finals.

Booker also had 13 rebounds and 11 assists for his first career triple double as the Suns won on Sunday despite the absence of all-star guard Chris Paul who has been placed in the NBA’s Covid-19 health and safety protocols.

Suns Jae Crowder said it was fitting that Booker stole the show in front of the crowd of 16,583 at Phoenix Suns Arena.

”I expect it. I know the type of player he is,” Crowder said.

Game two is scheduled for Tuesday night in Phoenix.

This is an unexpected NBA final four matchup between two franchises trying to cap their storybook seasons by winning their first NBA titles. The Clippers have never been to the Conference finals before and the Suns last made it in 2010.

This was the Suns’ first game since last Sunday when they completed a four game sweep of the Denver Nuggets in the second round. 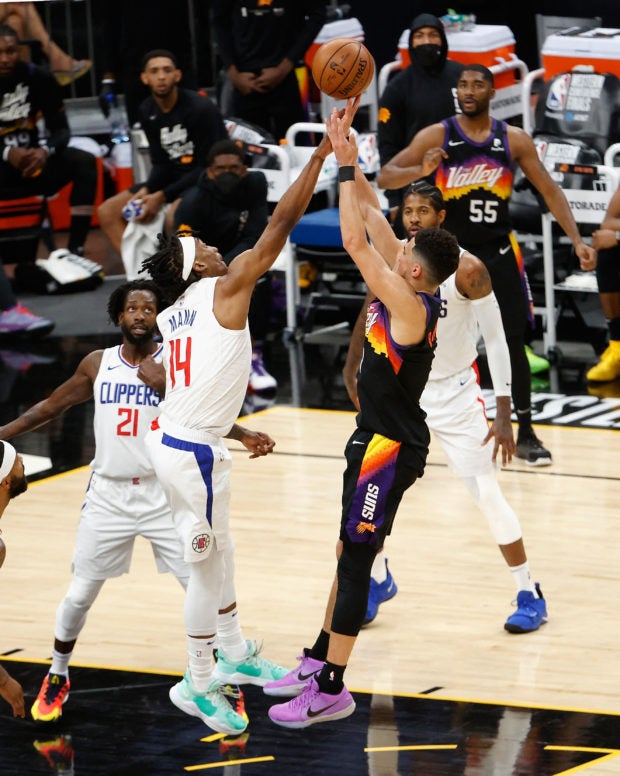 Devin Booker of the Phoenix Suns puts up a shot over Terance Mann of the LA Clippers during the second half of game one of the Western Conference Finals at Phoenix Suns Arena on June 20, 2021 in Phoenix, Arizona. (Getty Images via AFP)

It is their ninth trip to the Conference finals as they seek their first title in the 53-year history.

Both teams were missing star players Sunday as Clippers forward Kawhi Leonard suffered a knee injury in game four of the second round against the Jazz.

Leonard did not join the Clippers on the trip to Phoenix. Coach Tyronn Lue said he wasn’t sure of his availability.

The Clippers beat the Jazz in epic fashion, ending one of the league’s most infamous droughts by advancing to the conference finals for the first time in their 51-year history.

Paul George scored 34 points, Reggie Jackson had 24 points and DeMarcus Cousins added 11 points off the bench in the loss for the Clippers.