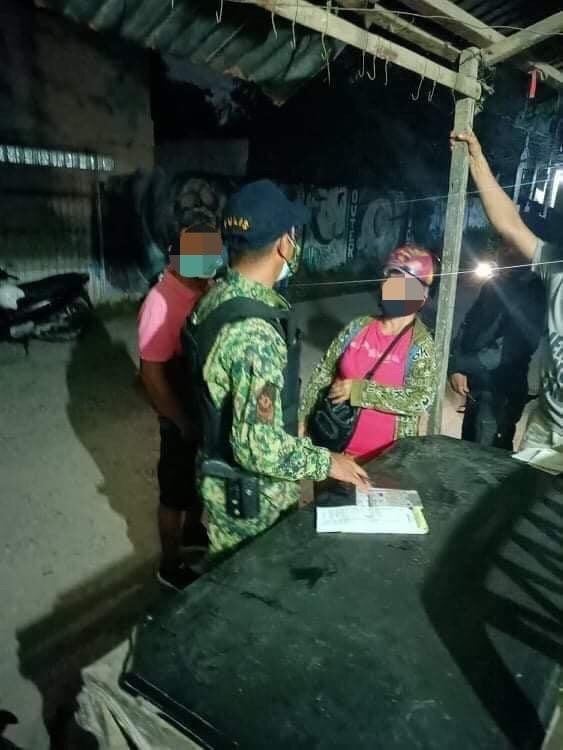 A motorcycle rider-traffic violator is issued a citation ticket by the Consolacion policemen at a “motor stop” in Barangay Nangka at past midnight or early morning of Saturday, June 26. |Photo courtesy of Consolacion police

CEBU CITY, Philippines — An after midnight “motor stop” or a sort of “checkpoint” targeting motorcycles in Consolacion town in northern Cebu today, June 26, netted 18 traffic violators and led to the impounding of at least 13 motorcycles

Police Executive Master Sergeant Vincent Aguanta of the Consolacion Police Station said that most of the violators caught in the “motor stop” in Barangay Nangka were those without helmets, driver’s license and registration.

Aguanta said there 8 riders without a driver’s license, 5 without a motorcycle registration, while 7 had no helmets at all.

He, also said that there were motorcycle riders caught with an overloading violation.

However, he did not specify how many violated this traffic rule.

Aguanta said those without helmets were issued citation tickets while those, who were without a driver’s license or vehicle registration, had their motorcycles impounded.

He also clarified that a “motor stop” was not really a “checkpoint” because it was done randomly and no “Stop checkpoint” sign was needed to implement it.

He also said that the “motor stop” was also targeting motorcycles.

Those, who were also caught overloading were also issued citation tickets.

Aguanta said that the violators issued citation tickets would have to pay their penalties of around P500 each violation at the Consolacion Traffic Enforcement Special Services office.

(There were riders who had two violations. There were others who really did not have a driver’s license and motorcycle registration. And if there were two violations, as far as I know, it is P500 per violation.)

Aguanta also emphasized that motorcycle riders should wear helmets and not just to avoid getting apprehended and getting to pay the traffic fine, but also for their own safety.

He urged the motorists to wear a durable helmet rather than wearing a cheaper type, saying that this would serve as fundamental life-saving role when plying the streets of the town.

He said this should not be because it should be for their protection.

Retired cop gunned down by unidentified assailants in Consolacion, Cebu

IN PHOTOS: CCTO issues over 7K citations tickets during first half of May