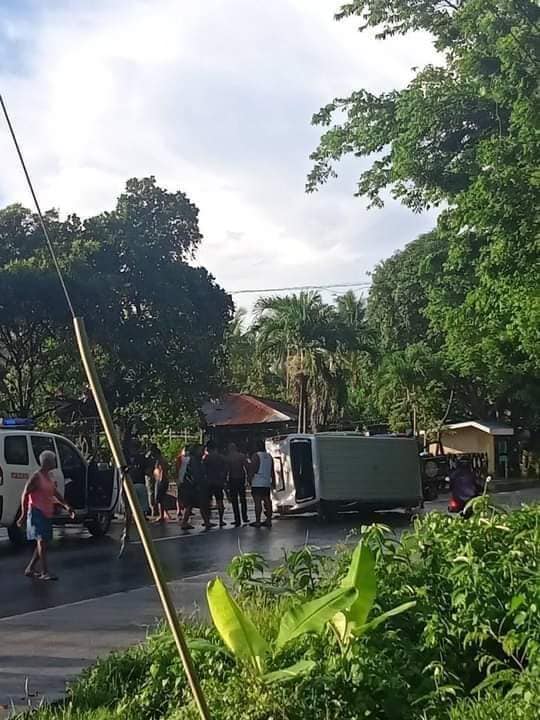 CEBU CITY, Philippines – An early morning trip to Daanbantayan town in northern Cebu ended in tragedy after the driver of a tourist van lost control of his vehicle and crashed to a roadside post and a concrete fence before it falling on its side in Barangay Bawo in Sogod town.

One of the seven passengers, who was identified as Calixto Tolo, died after he was thrown out from the van and pinned down by the vehicle.

The accident happened at about 6:05 a.m. at the vicinity of Barangay Bawo in Sogod town, or about 67 kilometers away from their supposed destination.

Tolo, a resident of Barangay San Roque in Liloan town, was already lifeless when brought to the Sogod District Hospital, according to a spot report that was released by the Sogod Police Station.

Another passenger, Teofilo Rivera, 48, was brought to the hospital for the treatment of his injuries. Police said Rivera took a motorcycle-for-hire to the Sogod District Hospital.

The five other passengers and tourist van driver Nyel Cañete refused to be brought to the hospital since they only suffered minor injuries.

Police investigation showed that Cañete, 35, was transporting seven passengers to Daanbantayan town that is located in Cebu’s northern tip when the accident happened.

But upon reaching the vicinity of Barangay Bawo, Cañete lost control of the vehicle and hit a roadside lamppost and a concrete fence before it landing on its side.

Tolo, who was asleep when the accident happened, was thrown out from the vehicle.  He was also pinned underneath when the vehicle came to a halt and landed on one side.

Police said are not discounting the possibility that Cañete was speeding, which resulted to the road mishap.  The early morning rain also caused the road to be slippery.