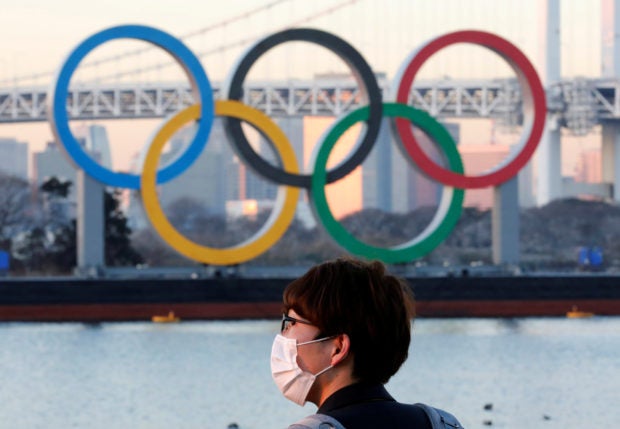 A man wears a protective mask amid the COVID-19 outbreak in front of the giant Olympic rings in Tokyo, Japan, in this January 13, 2021, file photo. REUTERS/Kim Kyung-Hoon

CEBU CITY, Philippines — The Philippines is looking to add two more qualifiers for the Tokyo Olympics slated from July 23 to August 28, 2021.

Currently, the country has 17 Olympic qualifiers, but two more are expected to be added in the next few days, the Philippine Olympic Committee (POC) revealed.

The two additional qualifiers are expected through the universality rule.

Swimming is allotted two slots through this system. Four Filipino swimmers are hoping to make it to the Olympics, but only two will make it through the universality rule of FINA or the International Swimming Federation.

FINA, the world governing body for swimming, is yet to announce the official list of swimmers who qualified for the Tokyo Games.

Meanwhile, the Philippine delegation is locked and loaded for the month-long games in Tokyo Olympics.

“In three weeks, the urn in Tokyo will be burning and Team Philippines—from the athletes and coaches down to the secretariat is ready for action,” Philippine Olympic Committee (POC) President Rep. Abraham “Bambol” Tolentino said on Thursday.

Chef de Mission Mariano Araneta will lead the first batch of officials who will be flying to Tokyo via Narita Airport on July 15 and will head directly to Conrad Hotel, Team Philippines’ official home during the meet which is hosted by Tokyo for the second time.

“The POC and the Philippine Sports Commission [PSC] secured the Conrad Hotel just in time and we’re glad that has been accomplished,” Tolentino said. “In terms of administrative and secretariat matters, we’re all settled.”

The PSC transferred on Thursday P11 million for the accommodation expense of Team Philippines from the total P48 million allocated for this. The entire PSC budget for the Olympic campaign is pegged at P200 million.

The athletes will also arrive in Tokyo in batches depending on their competition schedule.

Read Next
Vice Mayor Rama on lack of vaccines: Are we being punished for being efficient?