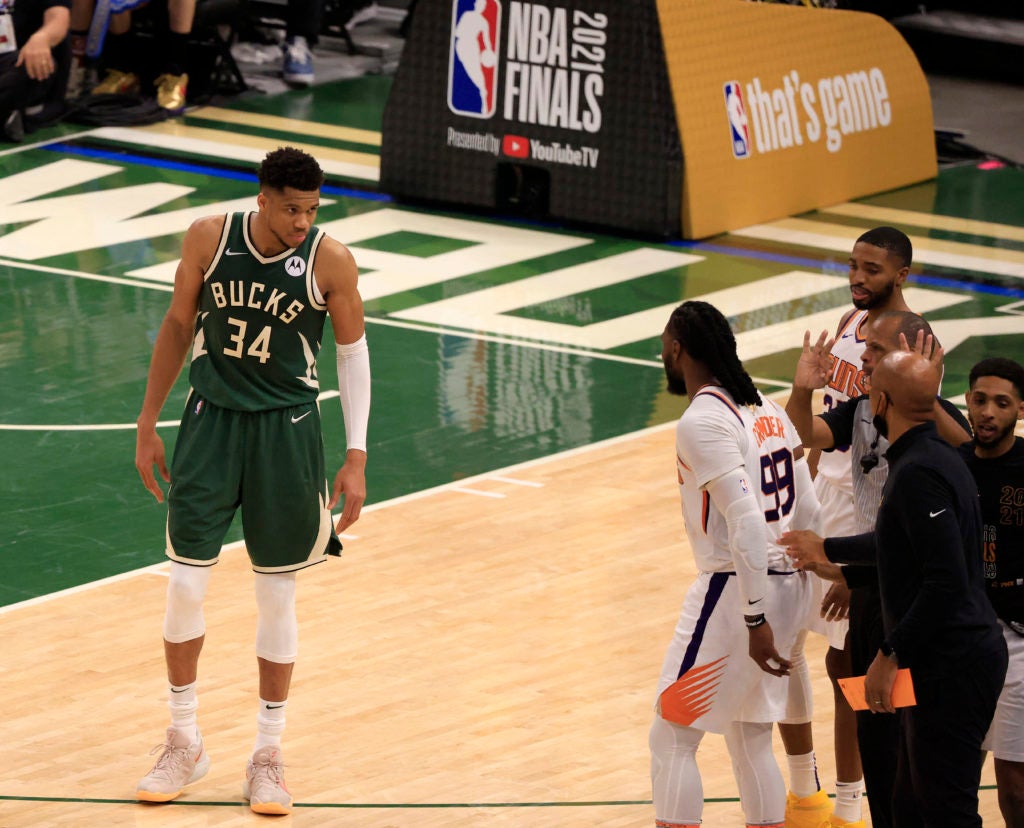 Giannis Antetokounmpo of the Milwaukee Bucks and Jae Crowder of the Phoenix Suns exchange words during the second half in Game Three of the NBA Finals at Fiserv Forum on July 11, 2021 in Milwaukee, Wisconsin. | AFP photo

Milwaukee—Giannis Antetokounmpo scored 41 points and grabbed 13 rebounds on Sunday to lead Milwaukee over Phoenix 120-100, reviving the Bucks’ chances to win their first NBA Finals in 50 years.

The 26-year-old Greek forward joined Shaquille O’Neal in 2000 and LeBron James in 2016 as the only NBA Finals players with back-to-back 40-point, 10-rebound performances.

Two-time NBA Most Valuable Player Antetokounmpo sparked the Bucks to a victory that pulled them within 2-1 in the best-of-seven championship series that continues Wednesday at Milwaukee. 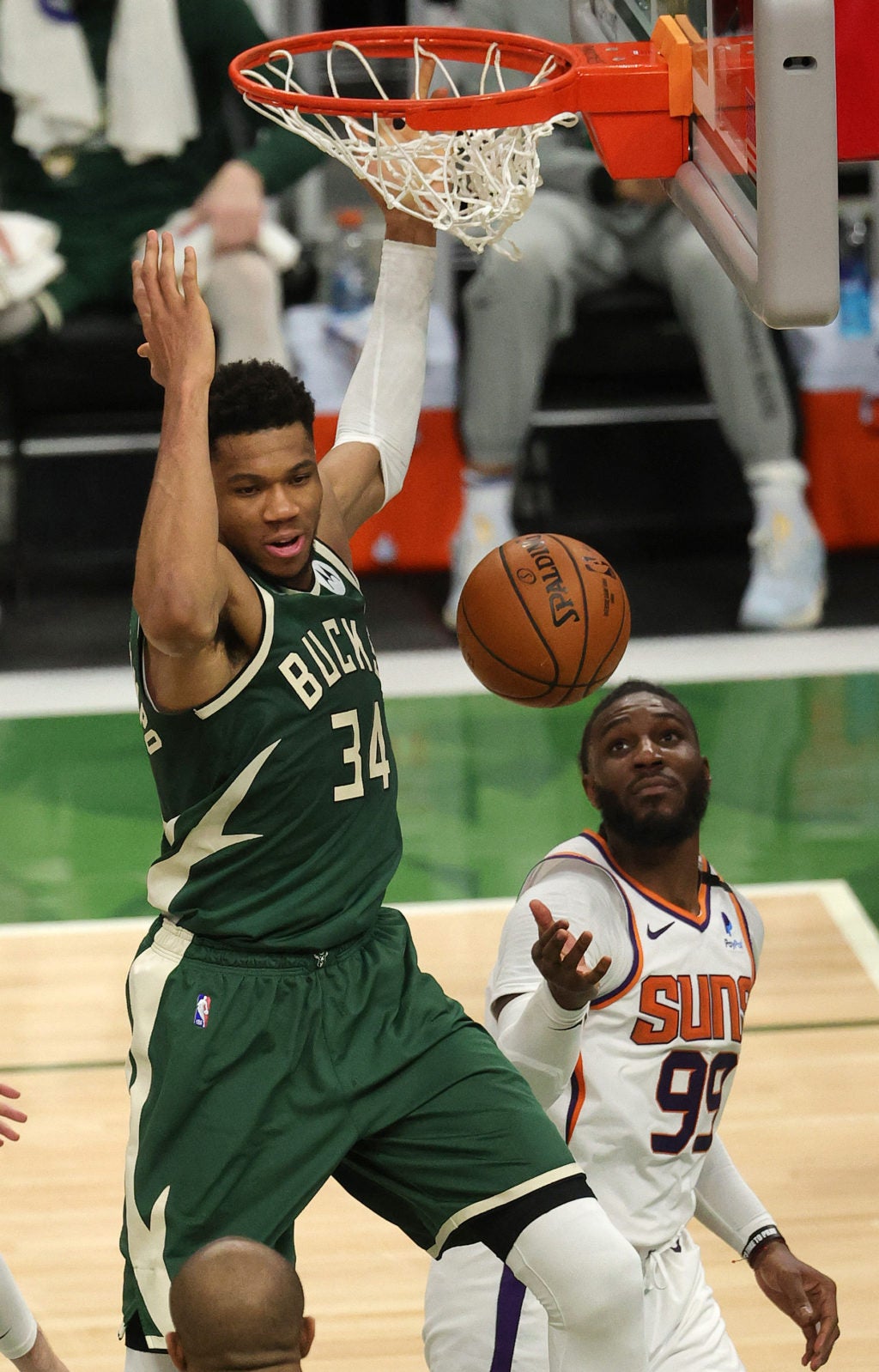 Milwaukee’s Giannis Antetokounmpo dunks against the Phoenix Suns during the second half in Game Three of the NBA Finals at Fiserv Forum on July 11, 2021 in Milwaukee, Wisconsin. | AFP photo

“To give ourselves an opportunity to win this series, we’ve got to stay aggressive,” Antetokounmpo said. “It’s all going to be mental from here.”

Antetokounmpo hit 14-of-23 shots from the floor and 13-of-17 from the free throw line to lead the Bucks to a crucial victory, as no team has ever rallied from 3-0 down to win an NBA playoff series.

“We knew what type of game it was going to be,” Antetokounmpo said. “We knew we had to play good basketball. I was trying to be as aggressive as I could.”

“I was trying to drive and open things up. I knew I had to get Khris and Jrue involved,” Antetokounmpo said. “My teammates want me to be aggressive.”

The Bucks, hosting their first NBA Finals game in 47 years, improved to an NBA-best 8-1 at home in the playoffs by beating the Suns, who had been a playoffs-best 6-2 on the road.

“We knew what we had to do. We knew what this game meant to us, to the city,” Holiday said. “It was about us coming out hard and being able to execute.”

The Bucks won their only NBA crown in 1971 while the Suns seek the first title in their 53-year team history.

Holiday went 8-of-14 after struggling in the first two games, Antetokounmpo drawing defenders to ease his outside shooting efforts.

“It’s awesome. Knocking down shots, it just fuels us and gives us energy,” Holiday said. “We’re going to keep feeding it to him. We have to stay confident and knock down the shots.”

Suns guard Chris Paul, in the first NBA Finals of his 16-year career at age 36, scored 19 points to lead Phoenix.

Bahamas big man Deandre Ayton scored 16 of his 18 points in the first half. Jae Crowder added 18 for the Suns.

Phoenix guard Devin Booker missed seven of his first eight shots and went 3-of-14 from the floor, 1-of-7 from 3-point range, in scoring only 10 points.

Phoenix grabbed a 36-30 lead, but the Bucks responded with a 20-6 spurt, Antetokounmpo scoring nine points to lead the way, in seizing a 50-42 edge.

Milwaukee closed the first half on a 10-0 run, Bobby Portis hitting a dunk and 3-pointer in the streak for a 60-45 Bucks half-time advantage.

The Suns began the third quarter by hitting 9-of-10 shots from the floor and pulled within 74-70, with Cam Johnson scoring 10 points and Crowder hitting three 3-pointers.

But Milwaukee battled back, scoring the final 16 points of the third quarter to grab a 98-76 lead entering the fourth quarter.

Antetokounmpo, who had 18 points in the first half, scored 16 in the third quarter while Holiday added 12.

“I felt like the momentum was going their way before that,” Holiday said. “I got the momentum going back on our side.”

The Bucks held the Suns at bay in the fourth quarter, ensuring a fifth game Saturday at Phoenix.