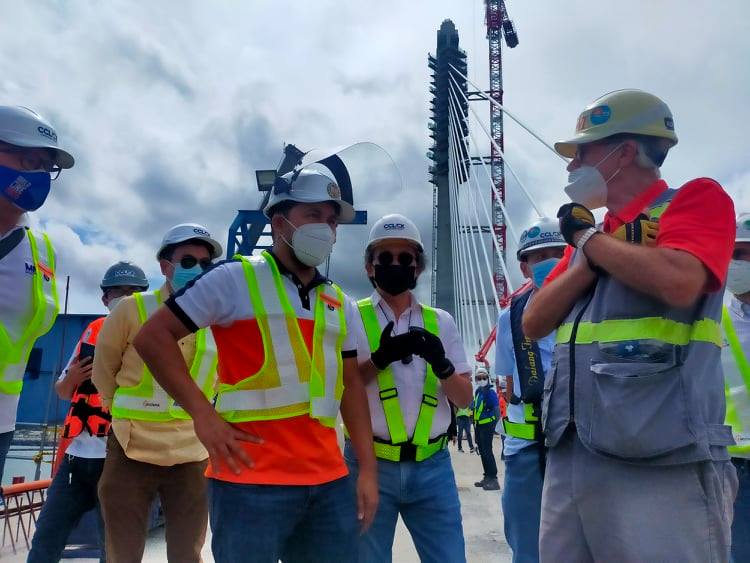 DPWH Secretary Mark Villar (fourth from right), gets appraised of the progress of the CCLEX construction.

CEBU CITY, Philippines — Department of Public Works and Highways (DPWH) Secretary Mark Villar inspected the ongoing construction of the Cebu-Cordova Link Expressway (CCLEX) to check the progress of the project.

Villar was in Cebu on July 16, 2021, to discuss with local officials the progress of infrastructure projects in the city including the CCLEX, plans for the Fourth Bridge, the ongoing construction of the Metro Cebu Expressway, road widening, and drainage projects.

The secretary particularly inspected the construction of the CCLEX to see how far the project is in its timeline and to discuss with officials of the Cebu Cordova Link Expressway Corporation (CCLEC) and Metro Pacific Tollway Corporation (MPTC) what the DPWH can do to assist them.

Villar is impressed with the technology used in the construction of the bridge hastening its construction since it broke ground in 2018. The project is already at 80 percent complete.

He was assured by CCLEC that the expressway can already accommodate motorists by the first quarter of 2022, and Villar said he is looking forward to it.

To prepare for CCLEX’s opening, the DPWH is working on widening the approach routes in the Cordova town side to make the expressway accessible and prevent bottlenecks in the area.

These include widening sections of the Mactan Circumferential Road (MCR) in Barangay Babag, Lapu-Lapu City and Pilipog, Cordova especially the Gabi-Pilipog Highway.

He said the project would cost around P500 million and should help improve the accessibility between the Mactan Cebu International Airport (MCIA) and the Cordova Coastal Highway, eventually connecting to the CCLEX.

As for CCLEC, the company said there are only a few more major constructions left to do, at least 20 percent left.

Alan Alfon, the president of CCLEC, said that they are targetting to serve the Cebuano motorists within the timeline since the project’s completion has already been delayed due to the pandemic.

This time, he said the health protocols are already set in place and they are more capable of continuing the project with minimal delays.     /rcg

Read Next
Cebuano aims to excel in shooting, football and studies