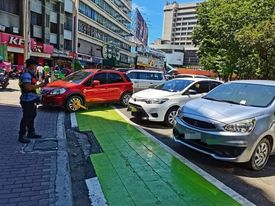 A traffic enforcer clamps a car that has parked and encroached on the bike lane in Cebu City. | Photo courtesy of Cebu City Transportation Office

CEBU CITY, Philippines — The Cebu City Transportation Office or CCTO is asking the Sugbo Bike Lanes Board (SBLB) to already start the deployment of their bike marshals now that the Metro Cebu Bike Lane network was inaugurated on Friday, July 16, 2021.

Paul Gotiong, CCTO spokesperson, told CDN Digital that they did not have enough enforcers to monitor the bike lanes in the city.

He said most of their enforcers were deployed on intersections and high volume areas.

“In a way, yes [our enforcers are not enough to monitor the bike lanes]. Since most of our enforcers are focused on intersections and high volume areas. It is like a cat and mouse game,” said Gotiong.

He said that the presence and help of SBLB and concerned barangay officials would be crucial considering that people would still be adjusting to the bike lanes.

Gotiong further said they hoped that the city ordinance, which would regulate the bike lane, would soon be finalized in order to control and put order to both motorist and cyclist on the road.

He said that the SBLB was supposed to have 120 bike marshals, who had undergone training a few months ago, but until now, they were nowhere to be seen.

Despite the lack of manpower, he said they would continue to enforce the traffic rules in the city as part of their mandate.

“On the side of CCTO, we just hope that the CO  [City Ordinance] 2408 (bike lane) will be finalized in order to control and put order to both motorist and cyclist on the road. As part of our mandate to control and manage traffic along the streets of Cebu City, we will continue to reprimand, apprehend and discipline violators in order to have a smooth flowing bike lanes in the city,” he said.

“We are still awaiting the final bike ordinance. We will continue to monitor illegal parking along the bike lanes. We also hope to see bike marshals already to augment enforcement,” he added.

By doing so, Gotiong said he hoped that they could also create a new behavior to the drivers that they would learn to share the road.

“We also hope that our concerned barangays will help maintain our bike lanes especially the bollards which are being damaged,” he said.

CDN Digital tried to get the statement of the SBLB but they had yet to respond as of this posting.

Read Next
Jerusalem wins rematch with Landero, walks away with OPBF title