Lawsuits after presidency? Duterte says he could run for VP, get immunity 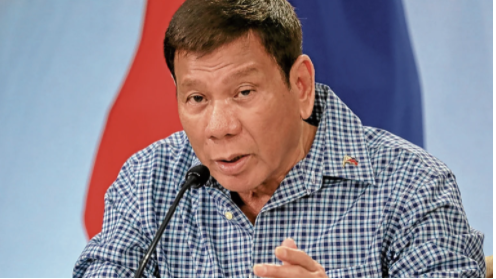 MANILA, Philippines — President Rodrigo Duterte on Saturday teased about running for vice president in the upcoming elections to get immunity from the lawsuits that he may face once he steps down as chief executive.

During the national assembly of the Partido Demokratiko Pilipino–Lakas ng Bayan (PDP-Laban), Duterte specifically mentioned former senator Antonio Trillanes IV and retired Supreme Court Senior Associate Justice Antonio Carpio who, he claimed, have been threatening him with charges once his presidential term is over.

This remark drew cheers from the PDP-Laban crowd, which has been pushing him to seek the second-highest government post in the national elections next year.

Duterte has so far been silent on his plans to run for vice president. However, he said it would be important that the next president be his ally.

Read Next
PDP-Laban declares Pacquiao’s post vacant, but denies he was ‘ousted’

TAGS: PDP Laban, President Rodrigo Duterte, running for vice president in the upcoming elections to get immunity from the lawsuits