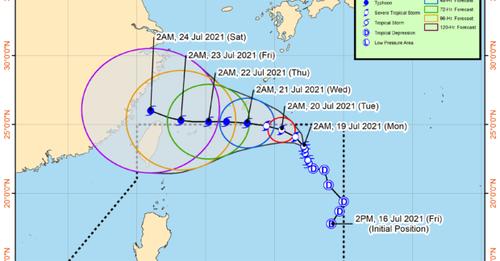 According to Pagasa’s 5 a.m. bulletin, the center of Fabian was last located 1,090 kilometers east northeast of extreme Northern Luzon. It is packing maximum sustained winds of 85 kilometers per hour (kph) near the center and gusts of up to 105 kph, and is moving north-northwestward at 10 kph.

“Fabian is forecast to further intensify throughout the forecast period and reach severe tropical storm category within 12 hours and typhoon category by Tuesday evening or Wednesday morning. Peak intensity may be reached by Thursday,” Pagasa said.

“Slight weakening may occur by Friday afternoon as the circulation of Fabian interacts with the rough terrain of Taiwan during its passage to the north of the island,” the agency added.

No tropical cyclone wind signal is currently in effect, according to Pagasa.

“Under the influence of the Southwest Monsoon that is being enhanced by ‘Fabian’ and the Tropical Depression estimated at 900 km West of Extreme Northern Luzon (outside the PAR) (20.8°N, 113.2°E), monsoon rains will be experienced in the next 24 hours over Ilocos Region, Zambales, Bataan, Occidental Mindoro, and Palawan,” Pagasa added.

The state weather bureau said the hoisting of any TCWS over any land area in the country due to Fabian remains less likely.

However, Pagasa advised residents and disaster managers in Batanes and Babuyan Islands to continuously monitor tropical cyclone bulletins, noting that any further southward shift in the orientation of the track forecast may result in the hoisting of TCWS No. 1 over these areas.

Fabian is forecast to maintain a north-northwestward or northwestward track this Monday before turning west northwestward on Tuesday. The tropical cyclone may exit the Philippine Area of Responsibility (PAR) on Tuesday evening or Wednesday early morning, according to Pagasa.

Afterwards, it will then move generally westward and pass close to the Miyako and Senkaku Islands of the Ryukyu Archipelago on Wednesday evening through Thursday morning.

Fabian may then take a west-northwestward turn by Friday as it passes over the sea north of Taiwan.

“A southward shift in the orientation of the track forecasts has been observed for the past 24 hours. If the trend continues, there is an increasing possibility that ‘Fabian’ will either re-enter the PAR or exit the PAR much later than the current forecast suggests,” Pagasa added.

Meanwhile, under the influence of the southwest monsoon enhanced by both Fabian and the tropical depression outside PAR, moderate to rough seas (1.5 to 2.8 meters) may be experienced over the western seaboard of Palawan including Kalayaan Islands in the next 24 hours.

Pagasa advised mariners of small seacrafts to take precautionary measures when venturing out to sea, and that inexperienced mariners should avoid navigating under these sea conditions.