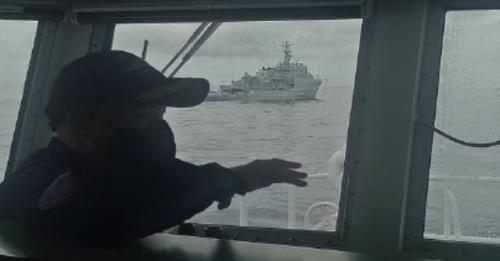 “Chinese warship 189 vicinity waters Marie Louise Bank, this is Philippine Coast Guard MRRV 4409….You are within Philippines’ exclusive economic zone,” Cmdr. Erwin Tolentino, of PCG vessel BRP Cabra could be heard as saying in a video footage of the PCG’s radio challenge on Monday (July 19).

“Your actions will affect Philippine-Chinese relations and will be reported to concerned authorities. You are advised to leave this vicinity, over,” Tolentino was heard saying in the radio challenge.

The incident between BRP Cabra and Chinese navy tugboat 189 happened last July 13. The PCG used its long range acoustic device to issue a verbal challenge against the Chinese ship.

The PCG ship sailed closer and followed the Chinese ship to make sure that it would leave the Philippines’ EEZ. When they were 500 to 600 yards away from each other, the Chinese ship sent a radio message:

“Philippine Coast Guard 4409, this is Chinese Navy Warship 189. Please keep two nautical miles distance from me,” the Chinese ship was quoted as saying.

The same PCG ship drove off Chinese and Vietnamese fishing vessels in the same area early this month.

The Philippine government stepped up its maritime patrols after the large-scale incursion of Chinese militia vessels in Julian Felipe (Whitsun) Reef early this year.