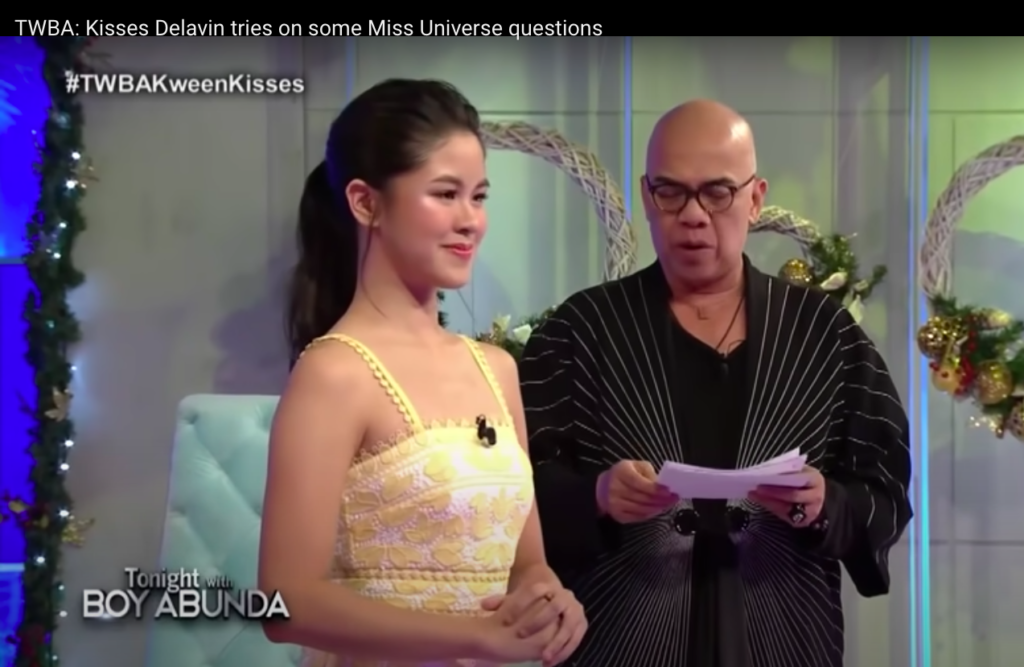 Before the official presentation of the candidates, social media posts about Kisses competing for the Miss Universe Philippines (MUPh) 2021 pageant have already circulated.

The excitement among fans grew even more when pageant training camp Aces & Queens posted a teaser of her joining the country’s most prestigious pageant.

Delavin received love and support from her fans as she was officially announced a candidate on Monday, July 19, 2021.

This episode of Kisses’ guesting at TWBA was aired last December 2018.

The video shows Kisses answering at least four questions from the “King of Talk” which, she answered whole-heartedly.

Here are her answers:

If there’s one thing you want the world to know about you, what would it be and why?

If there were no rules and you could be outrageous for one day, what would you do?

“If there were no rules and I could be outrageous for one day, I would go to every politician that robbed our nation and I will take that away and give it to the right hands. And I thank you.”

Would you rather be kind or right?

“In this lifetime, I would rather be kind than right. Because anyone in the world can be right, but not everybody can be kind. And I believe that if there’s one thing in the world that’s so beautiful, it’s that even though the world can be so harsh to you, even if the world can grip you and break you into pieces, you can still be kind and I think that’s power.”

Would you rather be the next Miss Universe or Miss TWBA, or the next girlfriend of Donny Pangilinan, and why?

The 22-year-old actress from Masbate is not new to pageants.