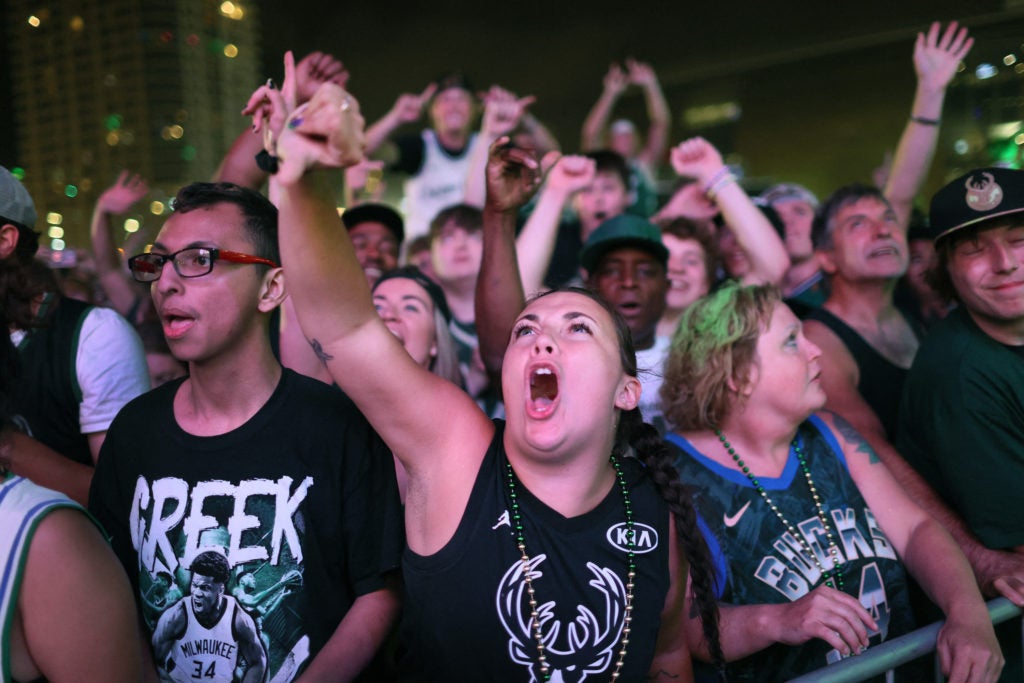 Fans celebrate outside Fiserv Forum as the Milwaukee Bucks defeat the Phoenix Suns in Game Six of the NBA Finals to win the championship on July 20, 2021 in Milwaukee, Wisconsin. This was the first championship for the Bucks in 50 years. | AFP photo

Milwaukee—For fans like Tom Cogdall, a 63-year-old retired Army officer who lives in Milwaukee, it was a long time coming.

“I remember 1971. This was 50 years, we needed it,” Cogdall said, outside of Brothers Bar & Grill, just steps from the Firserv Forum where the Milwaukee Bucks won their first NBA title in five decades on Tuesday night.

The victory set off a wild citywide celebration that long-suffering supporters described as mixing relief and exhilaration.

Cogdall said he arrived at the bar and waited in line five hours before game time with friends to ensure they would have a seat.

Streets across Milwaukee were packed, with 65,000 Bucks fans, more than 10 percent of the city’s population, crowded together in the Deer District near the stadium to follow the game.

One police officer who asked that his name not be used said there were about 1,000 officers from the city and state near the arena.

There were a handful of arrests, mostly for intoxication, but no violence was reported as of the end of the game.

The Water Street Bar District, also close to the stadium, was heaving with delirious fans into the night, as was Brady Street, known for its trendy shops, restaurants and bars.

Isaiah Tyler, a 43-year-old painter who was born and raised in Milwaukee, said: “This is history. I grew up here and have gone to a lot of lousy games — so this is the payoff.”

Tyler, who is Black, also said the Bucks brought the city together after a tough time with the pandemic.

“Milwaukee is a very segregated city, so to see us all together, all races, for one cause, this is how the world should be,” Tyler said.

Brian Robinson, who is 49 but born in 1971, said he couldn’t help but think of his father, a lifelong Bucks fan.

Father and son Chris and Camron Crumble went to Water Street to soak in the atmosphere and watch the game outside Bar One.

“Milwaukee hasn’t had anything this big in a long time,” Chris, 52, said. “To do this with my son, for him to experience this with me, is unbelievable.”

A few blocks from the arena before the game, Dezzie Storne, a 55-year-old Atlanta resident, was selling shirts that read “Bucks In Six,” a reference to the deciding game.

He said he drove up with T-shirts to sell for $20 each and was confident his investment would pay off.

“I have faith,” Storne said before the game, explaining that he put all his money into game-six shirts, betting that there would not be a game seven.

After the Bucks defeated the Phoenix Suns 105-98 to win the series in six games, Storne was proved correct.