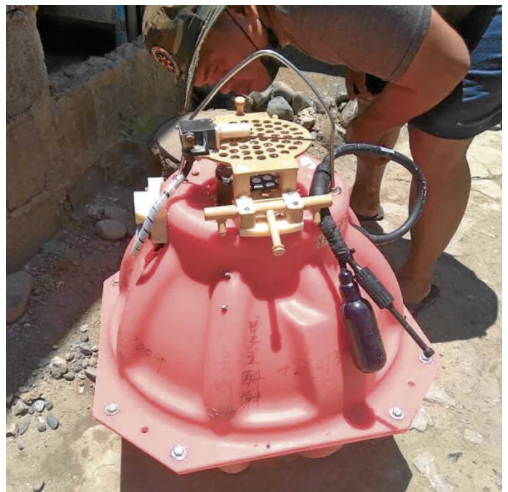 UNUSUAL FIND Fishermen found an ocean bottom seismometer, or OBS, in a recent trip to the West Philippine Sea, about 239 kilometers northwest of Infanta, Pangasinan. The equipment, bearing Chinese characters and used in oil exploration, was recovered within the country’s exclusive economic zone. —CONTRIBUTED PHOTO

MANILA, Philippines — Malacañang on Thursday said it is confident that there are no ongoing exploration efforts in Scarborough shoal, especially by the Chinese, despite claims of some fishermen finding a device reportedly used in exploring oil in the contested area.

Local fishermen in Pangasinan reportedly found last July 1 an ocean bottom seismometer (OBS), which bore Chinese characters, along the shoal when they were working on their “payao” or an articifal reef used to attract and catch fish in open waters.

The payao is about 239 kilometers (129 nautical miles) northwest of Infanta town in Pangasinan province.

So far, the Palace has not received a report on maritime vessels making exploration efforts in the West Philippine Sea, presidential spokesperson Harry Roque said.

(As far as we know, we are monitoring ships there in Scarborough shoal. There is no report yet of a ship used for exploration purposes.)

He said a boat is needed to be able to use the oil exploration device but there is no report yet of such a vessel.

Should there be such, the government would immediately verify it and “do the corresponding action.”

“Wala naman ganoong report na nakukuha so for now we are confident na wala namang exploration na nagaganap diyan sa Scarborough at kung mayroon man, we can verify it and we can file and do the corresponding action,” Roque said.

(We are not getting any such report so for now we are confident that there is no exploration happening in Scarborough. But if there is, we can verify it and we can file and do the corresponding action.)

The Philippine government will also not ask China to explain why there is such a device, bearing Chinese characters, found in the contested area. The government will instead investigate how the equipment got there.

Read Next
Rama may need to extend stay as acting mayor, Labella “stable”