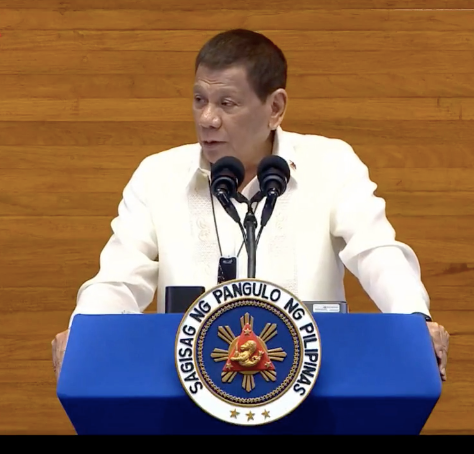 President Rodrigo Duterte says the government will go after opportunists who took advantage of the social amelioration program fund. | screen grab from SONA

And several officials here in Cebu are expecting the Chief Executive to lay bare the accomplishments his administration made in the past five years, particularly the ‘Build, Build, Build’ program.

Cebu City Acting Mayor Michael Rama said he wanted to hear the achievements the administration of President Duterte made.

For Rama, the city ‘greatly benefited from the Build, Build, Build initiative’ and that it did not stop despite the ongoing COVID-19 pandemic.

“In the last several days to come (in the President’s term), there are a lot of accomplishments our President made, and I would like to hear him mention even just a summary or narration of all these accomplishments,” Rama told CDN Digital in a phone interview.

“With his full-fledged support, our Build, Build, Build projects here in Cebu City, like the Cebu – Cordova bridge, are still going on amid this pandemic,” he added.

He also said that during his recent visit with the President, he told the latter that his administration had ‘done plenty for Cebu City during the pandemic’.

Aside from big-ticket infrastructure projects such as the third Cebu-Mactan bridge, Rama cited the assurance made by the Duterte administration for the actualization of the Cebu Bus Rapid Transit, and the implementation Social Amelioration Program (SAP) as ‘accomplishments’.

The vice mayor also revealed he was invited to personally attend the President’s SONA, which will be held at the Batasang Pambansa Complex in Quezon City.

But he declined, saying that the COVID-19 situation in the city needed urgent attention.

Liloan Mayor Christina Frasco, president of the League of Municipalities of the Philippines in Cebu province (LMP – Cebu), also shared the same sentiments with Rama.

“Through these meaningful programs and projects that give direct benefit to the people, the promise of change that President Duterte made in 2016 is greatly felt five years on,” Frasco said in a separate text message.

The mayor said with the President’s support, Liloan was able to have a new university, the Asturias-Liloan road that directly connects this northeastern town to the northwest municipality of Asturias, the Metro Cebu Expressway, the Mandaue-Consolacion-Liloan Bypass Road, and ‘several other road concreting projects that provide access to economic opportunities, ease up traffic, and elevate the quality of public infrastructure of Liloan in general, resulting in a better quality of life for the people.’

“Liloan has also greatly benefited from the social welfare programs of the Duterte Administration which include financial assistance for livelihood, medical, and other crisis situations including the pandemic, as well as skills training programs for the gainful employment of our constituents,” Frasco added.

The Malacañang on July 21 announced that President Duterte would be showing off the country’s improvements since he took over the seat of power in 2016, notably on peace and security as well as foreign policies, for his final Sona.

Looking back at Duterte’s Sona promises