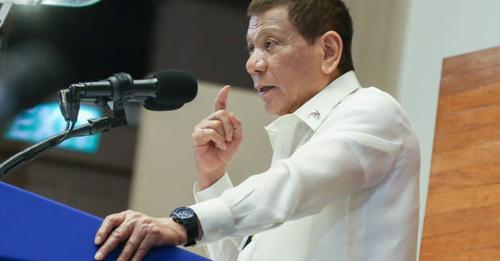 There will be no movie director calling the shots or choosing the angles when President Duterte delivers his final State of the Nation Address (Sona), but there will still be an undercurrent of song and symbolism to convey the administration’s “heirloom legacies.”

But then, who needs a director when the real star of the show is expected to provide all the fireworks, possibly with trademark expletives for his last words from the podium of the House of Representatives?

PTV general manager Katherine de Castro said Andanar’s team was given a free hand in choosing the director for this year’s address. Abad had directed the Sonas of past presidents, said De Castro.

While past presidents did not engage the services of movie directors for the annual speech, Mr. Duterte’s past five Sonas were directed by leading filmmakers Brillante Mendoza (2016 and 2017) and Joyce Bernal (2018 to 2020).

In 2016, Mendoza used unusual, low-angle shots said to be reminiscent of Leni Riefenstahl’s “Triumph of the Will” and Orson Welles’ “Citizen Kane,’’ and also tinkered with the lights at the House plenary hall for some “mood lighting.” In 2017, he treated viewers to extreme closeups of the President.

‘Dust in the Wind’

But even without a movie director, this year’s Sona will not be without touches of showmanship. Morissette Amon, who used to perform regularly in ABS-CBN, the network shuttered last year by the Duterte administration, will sing the national anthem. The House invited Amon for that performance, De Castro said.

Andanar said prerecorded versions of Mr. Duterte’s favorite songs, rendered by the Philippine Philharmonic Orchestra, would also be played during the Sona.

These include “Ang Pagbabago,” “What a Wonderful World,” “Dust in the Wind” and “MacArthur Park,” he said.

Design inspirations from Mindanao would be incorporated in the address and would focus on the administration’s “heirloom legacies,” the Palace communications chief added.

“With our last year in the Duterte administration, we will ensure that this year’s Sona will be etched in the hearts and minds of the Filipino people that we’ve worked hard to serve,” he said.

Andanar said some 400 attendees were expected to be physically present at the Batasang Pambansa for the President’s address, where the audience would be limited due to the pandemic. They will be required to present negative COVID-19 test results.

Before the COVID-19 crisis, past Sonas were considered red-carpet events, an annual intersection of politics, punditry and even fashion, with the noise of protest rallies adding to the soundtrack.

This Monday, however, the road leading to Batasan may not be as agitated. According to Quezon City public order and safety office chief Elmo San Diego, the local government did not issue a rally permit to the militant group Bagong Alyansang Makabayan (Bayan) due to the continuing threat of the coronavirus, especially after the local detection of the Delta variant.

But Bayan secretary general Renato Reyes Jr. said neither the police nor the Delta variant could stop Sona protesters from taking to the streets.

“Our constitutional rights are not suspended during the pandemic and we have proven capable of observing the necessary health precautions for over a year now,” Reyes said. “We wouldn’t be protesting this much if it weren’t for Duterte wanting to stay in power beyond 2022. It’s Duterte who is forcing people to protest during the pandemic.”

The Philippine National Police said it was “100-percent ready” for the Sona, with PNP Gen. Guillermo Eleazar committing a 15,000-strong force—double the number deployed last year—to secure the venue and surrounding areas.

The PNP will observe a policy of “maximum tolerance’’ in dealing with protesters, Eleazar added.

Officers tapped for the Sona will be using the PNP’s newly acquired body cameras capable of video live-streaming, Danao said. —With reports from Dexter Cabalza, Nikka Valenzuela and Inquirer Research

Read Next
Face-to-face classes can wait until Delta is out – Sen. Gatchalian