Duterte: When I said I will fight drugs in 6 months, I thought it was like in Davao 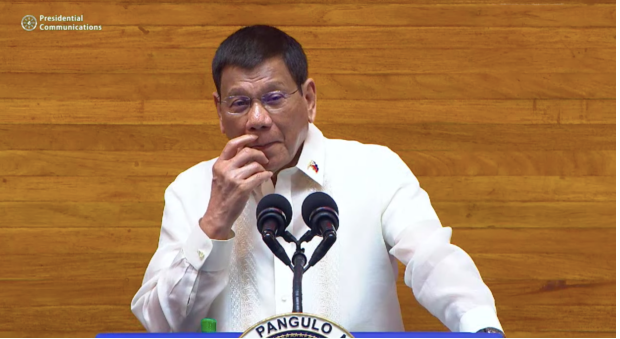 A screengrab of President Rodrigo Duterte as he delivers his final State of the Nation Address on Monday, July 26, 2021, at the Batasang Pambansa plenary hall.

MANILA, Philippines — “I thought it was like in Davao.”

President Rodrigo Duterte had this to say in his final State of the Nation Address (SONA) as he looked back at one of his campaign promises back in 2016 when he was vying for the presidential post: fighting the prevalence of illegal drugs in the country.

“When I first said I will fight drugs in six months, I thought it was like in Davao. You can either coerce, intimidate or bribe them or give them money, I said, ‘Lumabas kayo ng Davao, doon kayo magkalat sa Luzon, ‘wag dito sa Davao (Get out of Davao, make a mess in Luzon, not here in Davao),’” Duterte said.

“Naniwala naman ang mga ul*l (The idiots believe me) and we were able to attain a sense of normalcy in the city,” he added.

The drug problem in the country has been a constant topic in Duterte’s annual SONA. Duterte’s promise to eradicate the country of crime and illegal drugs in six months were among the focal points of his 2016 presidential campaign that brought him to power.

The campaign against drugs prompted the controversial and bloody drug war which has been criticized locally and internationally over alleged human rights abuses.

Read Next
Police: List of names may provide leads to radio blocktimer’s killers