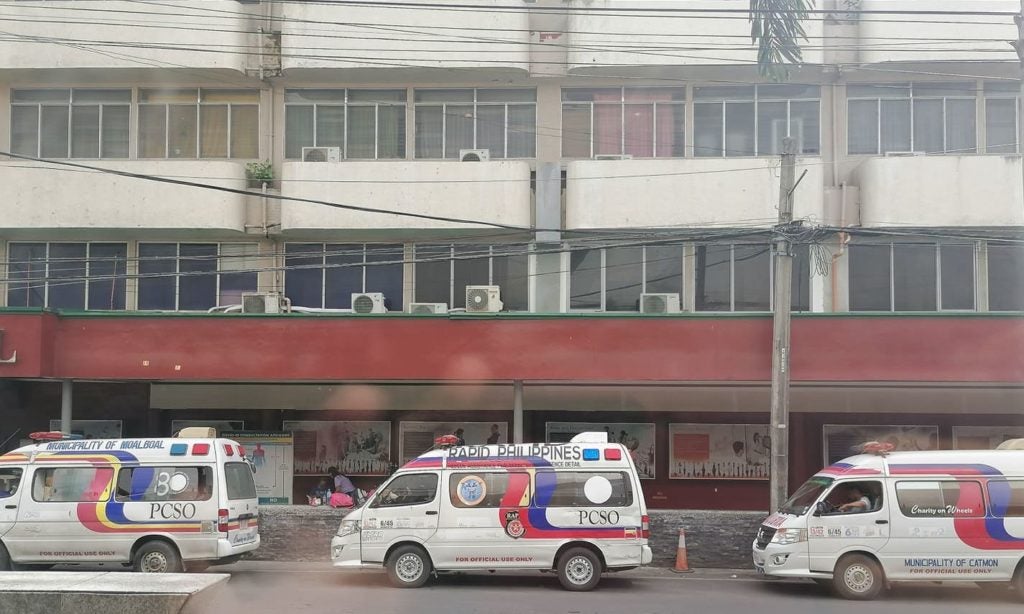 Ambulances from the Cebu towns of Catmon, Tuburan, and Danao City are seen parked outside the emergency ward of a private hospital in Cebu City on July 27, 2021. CDN Digital photo | Morexette Marie B. Erram

One of them had a patient who was relying on an oxygen tank. The paramedic recently assigned to him said they were waiting for their turn to be accommodated in the hospital’s emergency ward.

CDN Digital opted not to disclose the identities of the paramedic and patient for their safety and in respect to their privacy.

This was just some of the scenes in some of Cebu’s largest privately owned hospitals as local health officials here work to prevent them from being overwhelmed amid the rising cases of COVID-19.

An increase in occupancy rates was observed in the hospitals in Cebu City and Cebu province.

The Provincial Health Office, on the other hand, said critical care utilization rate has increased from 15 percent last week to 21 percent as of July 26.

But both denied reports circulating that healthcare facilities here were already overwhelmed.

“But the City and the Department of Health and the Hospitals nag-meeting man ta last Sunday they are moving heaven and earth ma-address ni siya”, he added.

Cebu City recently reinstated stricter health protocols such as the liquor ban and earlier curfew hours that will last until August 26 as part of their efforts to reduce the transmission of COVID-19.

Meanwhile, Dr. Christina Giango, Provincial Health Officer, admitted they saw a slight increase in the number of admission in all 16 hospitals of the province.

But Giango added that as of July 26, the total critical care utilization rates are far from ‘overwhelming levels’, and that the ‘outbreak remained manageable’.

“Our hospital occupancy rates are at 21 percent as of yesterday (July 27). That’s 86 beds occupied out of the total of 416… Naay pagsaka gyud, and all over man siya,” said Giango in a separate interview.

She also said the hospitals in Cebu province are still capable of responding to the continuous increase of COVID-19 cases.

“We are still managing. And we have been preparing [for the spike in cases] by increasing bed capacity and augmenting our healthcare staff in our hospitals,” said Giango.

In the meantime, Giango urged confirmed and suspected COVID-19 patients with mild to no symptoms of the infection not to proceed immediately to the hospitals.

She said patients with moderate to severe cases are the ones prioritized in the hospitals.

When reporters visited a privately owned hospital in the city’s uptown area on Tuesday afternoon, ambulances from the towns of Catmon, Tuburan, and Danao City were seen parked right outside the emergency ward.

The total number of active COVID-19 cases in Cebu City and Cebu province, as of July 26, have reached 4,105, based on the latest bulletin from the Department of Health in Central Visayas (DOH-7).

Both localities remain under the most lenient form of community quarantine, Modified General Community Quarantine (MGCQ).

Read Next
All set for Weley So Cup division finals