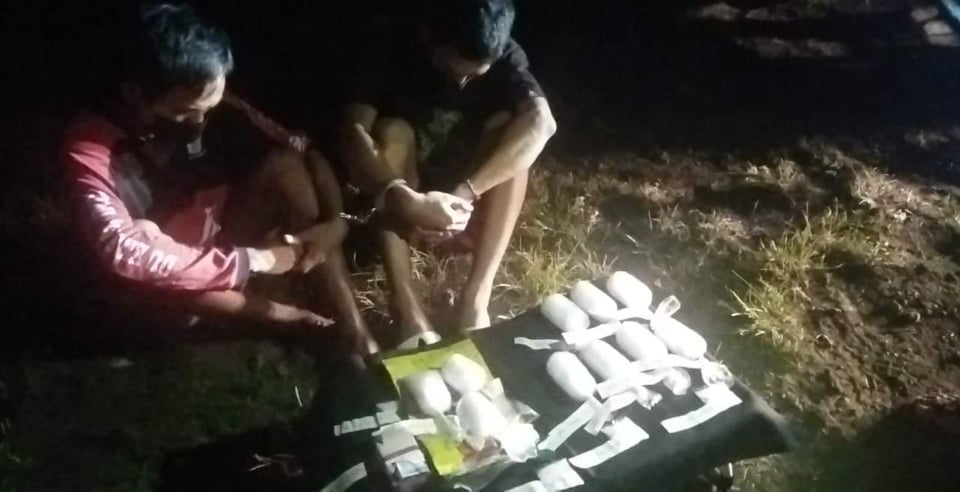 Two suspects are arrested after they were caught in a joint buy-bust operation in San Carlos Heights, Barangay Quiot, Cebu City past 8 p.m. on Tuesday, July 27, 2021. | contributed photo

MANDAUE CITY, Cebu – Police are not discounting the possibility that the source of the drugs seized in a buy-bust operation in Barangay Quiot, Cebu City on Tuesday evening, July 27, 2021, could be of the same source with that of the “shabu” confiscated last month in Barangay Taptap.

Police Colonel Josefino Ligan, director of the Cebu City Police Office (CCPO), made the statement after they observed some Chinese markings in the packaging of the illegal drugs recovered in the Quiot operation. These markings were also seen in the  Taptap operation.
READ: IN PHOTOS: Estimated P70M worth of drugs seized in Taptap, Cebu City
“There is a possibility nga same source lang kay tungod sa packaging nga atong nakit-an karon. We know the source sa katong packagings, ato napod ni silang i-connect,” Ligan said.
On Tuesday, personnel from the City Drug Enforcement Group (CDEU) and City Intelligence Branch (CIB) of the CCPO, seized a total of 1,020 grams of suspected shabu amounting to P6,936,000 from two suspects in Barangay Quiot.
The arrested suspects were identified as Ryan Rabanes, 19, and Henry Gayhe Bontilao, 39. They were caught in a joint buy-bust operation in San Carlos Heights past 8 p.m. on Tuesday.
Rabanes, who resides in Barangay Pasil, was considered as high value individual in the regional level. Bontilao, on the other hand, is a resident of Barangay Binaliw, who is part of a station level watch list.
Ligan said they will be doing a link diagram so as to determine whether this group is a down liner of the group they caught in Barangay Taptap.
“I-link diagram nato para masubay gyud kon kining grupoha, downliner ba ni sila sa katong sa napulo ka kilo nga nakuha [sa Taptap],” he said.
Ligan added the alleged source of their supply is in the Cebu City Jail. He added that the only difference with the drugs confiscated in Taptap is the packaging. In the recent bust, the packaging was smaller.
He stressed that since the suspects already repacked the shabu, it means to say that they already have designated people or places where they could drop it.
The city director also disclosed that the two suspects were under monitoring for  a month.
“Taas-taas og pagsubay ang atong mag operatiba kay tungod lagi, courrier, ang sistema sa courrier man gud is dili kaayo na siyaa molutang dayon,” he said.
/bmjo
RELATED STORIES
Police say drug suspects killed in Taptap could be part of big-time drug group