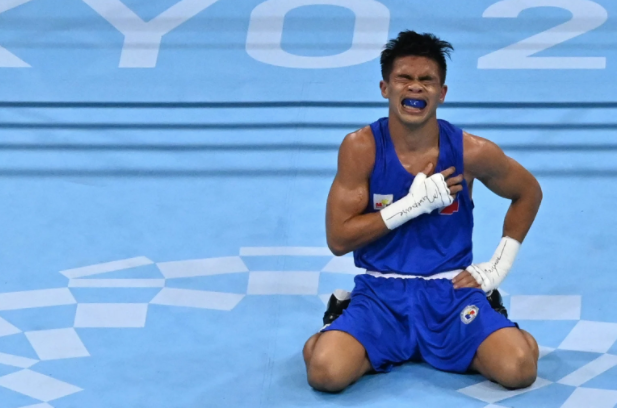 FILE – The Philippines’ Carlo Paalam celebrates after winning against Uzbekistan’s Shakhobidin Zoirov during their men’s fly (48-52kg) quarter-final boxing match during the Tokyo 2020 Olympic Games at the Kokugikan Arena in Tokyo on August 3, 2021. (Photo by Luis ROBAYO / AFP)

CEBU CITY, Philippines—- Filipino boxer Carlo Paalam cruises to the gold medal round after manhandling Japanese Ryomei Tanaka in the men’s flyweight semifinal bout of the Tokyo Olympics on Thursday at the Kokugikan Arena in Tokyo, Japan.

The 23-year-old Paalam’s victory assured him of at least a silver medal in the boxing event of the Olympics.

Contrary to what many had predicted, Paalam easily defeated the taller Japanese foe with counter jabs and straights that kept the latter at bay.

Four judges from Ukraine, Sri Lanka, Australia, and Cuba scored,30-27, in favor of Paalam while the judge from Uganda has it,29-28, to give the latter a unanimous decision victory.

Paalam will try to duplicate Hidilyn Diaz’s gold medal win as he faces Galal Yafai of Great Britain in the gold medal round on Saturday at 1PM (Manila time).