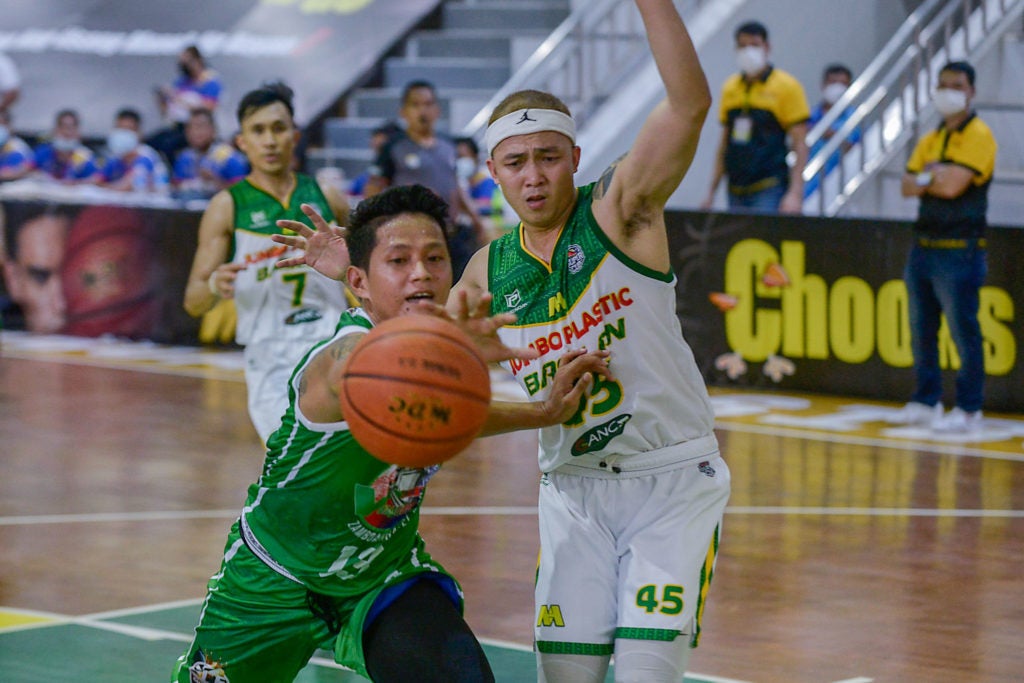 James Castro (green jersey) of Roxas and Juneric Baloria of Basilan are seen battling for the loose ball during their first encounter on July 13 in Ipil, Zamboanga Sibugay. | VisMin Super Cup Photo

The Peace Riders gained an automatic finals berth after sweeping the elimination round, 8-0. Two more wins and the Peace Riders will make history as the first Mindanao leg champions.

However, the fourth seed Petra Cement-Roxas Vanguards will be there to derail their title bid.

Roxas is fresh from eliminating the JPS Zamboanga City on Friday, 2 -1, in their best-of-three semifinals series.

Before tomorrow’s tipoff, an awarding ceremony will be held at 6 p.m. as the league will award the Mindanao leg season MVP, top homegrown player, and the mythical five.

The Peace Riders have already beaten the Vanguards in the elimination round. However, Jerson Cabiltes, the head coach of the Peace Riders believes they will be facing a different opponent tomorrow.

Their first game was marred with unusual circumstances after it was canceled and moved to another date due to the unplayable court condition when the games were still held in Ipil, Zamboanga Sibugay on July 13.

That game was moved to July 27 in Pagadian City where the Peace Riders battered the Vanguards, 85-64.

While waiting, the Peace Riders didn’t entirely rest during their 11-day layoff. Instead, they trained, for the most part, to prepare for the finals and to shake off the rust.

Bugged by injuries, Bobby Balucanag, Darwin Lunor, and Mark Bringas are unsure deployments for Game One.

Meanwhile, Roxas, who just played five games in six days, would use the experience they got from playing against a veteran JPS squad, which featured players like Gabby Espinas, Mac Cardona, and Jerwin Gaco among others.

It was a huge boost for the Vanguards, especially for the younger ones according to head coach Eddie Laure.

Despite being the underdogs on paper, the first-time head tactician is ready to face the challenge.

Even with the Peace Riders’ impressive, 8-0 slate in the eliminations and setting various records along the way, Laure knows all is back to zero in the Finals.

Read Next
Montealto: Mandatory use of terminals to prevent overloading of buses