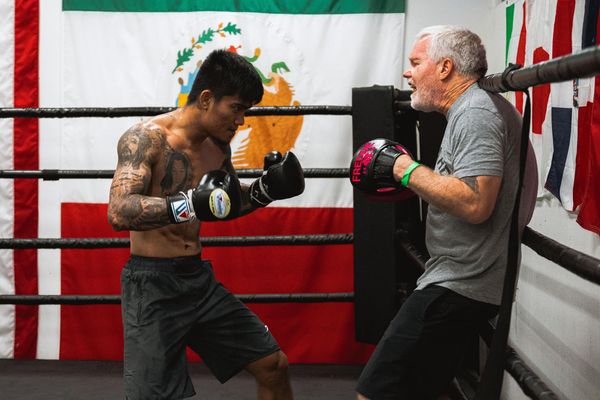 CEBU CITY, Philippines — Mark “Magnifico” Magsayo is gunning for no less than a knockout victory against Mexican Julio “Pollito” Ceja when they tangle in a world title eliminator duel in the undercard of the Pacquiao-Ugas world title showdown on August 21 (August 22 Manila time) at the T-Mobile Arena in Las Vegas, Nevada, the United States.

In an interview with the Premier Boxing Champions, Magsayo, the pride of Tagbilaran City, Bohol said that he is ready to go all the way to 12 rounds but he is aiming for a knockout victory.

“I am for a 12-round fight, but if there’s the opportunity to knock him out in the early rounds or in the last round. So I’m gonna push myself to knock him out,” said Magsayo in the interview.

However, the 26-year old Boholano, who is the reigning WBC Asian Boxing Council featherweight champion said that he will not take Ceja lightly. For him, Ceja is a tough and aggressive fighter.

“Julio Ceja is a tough fighter, aggressive fighter. He’s a good fighter, so I’m gonna do my best for this upcoming fight, and I’m sure that I’m gonna win the fight,” added Magsayo who’s been training under the watchful eye of Freddie Roach for a year now.

Magsayo has been training alongside Pacquiao at the Wild Card Gym in Los Angeles, California for the upcoming fight card.

He said that fighting alongside the Filipino ring icon is a dream come true and that he’s been keenly observing how the fighting senator trains.

“I’ve been learning a lot of things. Of course, Coach Freddy (Roach) teaches me a lot of things, I saw the training of Senator Manny Pacquiao with coach Freddie,” said Magsayo.

“There are a lot of movements, the speed, the power. I would like to say good luck to him, my idol. I’m excited to watch his fight in person.”

Magsayo is unbeaten with 22 wins and 15 knockouts. In his most recent bout last April, he knocked out Mexican Pablo Cruz in Uncasville, Connecticut.

Magsayo is highly ranked in three boxing governing bodies. He is No.5 in the WBC, No. 4 in the International Boxing Federation (IBF), and No. 3 in the WBO, under the featherweight division.

Ceja meanwhile, is ranked NO. 12 in WBC.

The Mexican boxer sports a more experienced record of 32-4-1 (win-loss-draw) with 28 knockouts. He is a two-time world title challenger who is seeking redemption after losing two of his most recent bouts.

The winner of their world title eliminator will likely challenge the reigning WBC world featherweight champion Garry Russel Jr. of the United States.