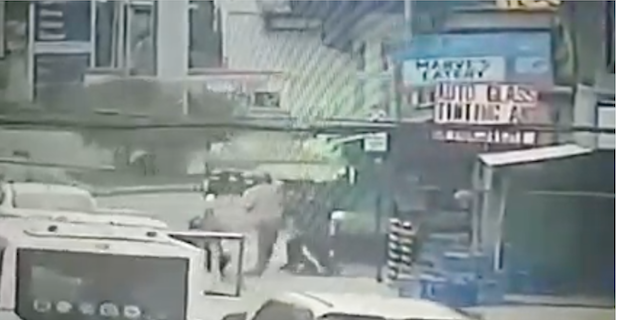 A motorist (white shirt back to camera) punches a Mandaue City traffic enforcer after the latter issued him a citation ticket for a traffic violation on Wednesday, August 25, in Barangay Basak. | screengrab from contributed video

MANDAUE CITY, Philippines — Another road rage incident has happened in Mandaue City that involves a traffic enforcer and a motorist across the Our Lady of Fatima Parish in Barangay Basak on Wednesday, August 25, 2021.

Nathaniel Mendoza, TEAM traffic enforcer, said the motorist who was identified as Mark Lester Santos got angry with him and punched him after Mendoza issued a citation ticket because Santos disregarded a no right turn on a red signal sign.

Santos also allegedly introduced himself to Mendoza and that he was working at the City Mayor’s Office.

Santos was found out to be the driver of Lawyer Jamaal James Calipayan, the city’s administrator.

Mendoza on Thursday, August 26, 2021, went to the Traffic Enforcement Agency of Mandaue (TEAM) office and Calipayan’s office to report and talk about the incident.

(I came here to inform them about the incident so that they can take action because what he did was not right and he justified his actions because he was working in the government.)

Calipayan already apologized to Mendoza and his family.

The city administrator said they immediately terminated Santos’ job order appointment after they learned about the grave misconduct committed by Santos and that they would not tolerate such behavior.

Calipayan said he would want to show that he was not favoring anyone even if how close an individual to him was if the individual would commit a grave mistake.

Calipayan also told Mendoza to pursue whatever complaint he wanted to pursue against Santos.

“It is gravely wrong and should not be tolerated by any person above him. Bisan unsa ka kaduol nako or bisan kinsa nga opisyales dinhi sa city basta naa kay buhaton nga sama ana ka bati ug ka sayop we will really mete the full extent of penalty,” said Calipayan.

(It is gravely wrong and should not be tolerated by any person above him. Even how close this person to him or any official in the city if they would do a mistake such as this we will really mete the full extent of penalty.)

(It is painful to know that one who is close to you is the one who betrays you. I have long instructed them here in the Mayor’s Office that if you are apprehended, then just let them apprehend you because what is there to do if you are really in the wrong. So I never doubted terminating him.)

He said that he also told Mendoza that he was ready to help him if he had medical needs.

Based from Mendoza’s medico legal case document, he was advised by the medico legal officer at the Mandaue City Hospital to take a rest for three days.

Road Rage can be avoided. Here’s how