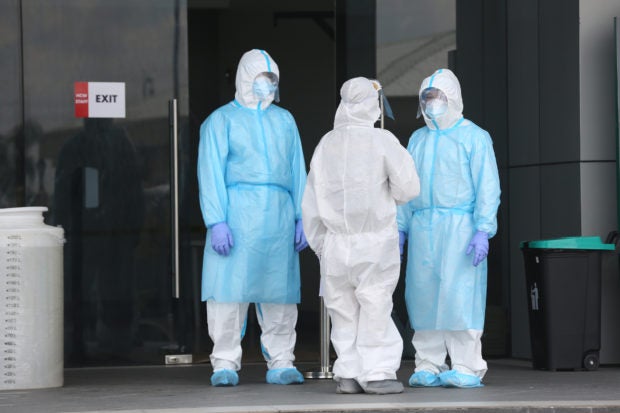 MANILA, Philippines — The delayed release of benefits and the strain of being at the front line of the fight against COVID-19 amid a record-breaking surge in cases due to the Delta variant are affecting not just nurses, but doctors as well.

Dr. Maricar Limpin, president of the Philippine College of Physicians (PCP), said in a television interview on Monday that “almost all” resident doctors in a major private hospital in Metro Manila recently refused to come to work for two days over the nonpayment of their benefits.

“That is an area of concern to us — why they did not report for work. They said [it was because of unpaid] benefits,” Limpin said.

She declined to identify the hospital and said that in another facility in the National Capital Region (NCR), at least five doctors were infected by the coronavirus and had to undergo quarantine.

According to her, other healthcare workers were not reporting for duty because “they are scared of the [COVID] situation going on right now.”

“That depletes the number of health-care workers in the hospitals, not to mention those who had resigned [for various reasons] … Five [doctors off duty] is a lot and in a hospital, that could disable [its operation],” Limpin said.

Last week, the PCP, along with 59 other groups of healthcare professionals, urged the government to step up its pandemic response and address the grievances of hospitals and their personnel over unpaid allowances.

The Healthcare Professionals Alliance Against COVID-19 said that hospitals were no longer just full but “overflowing” with COVID-19 patients, pointing out that the data coming from the Department of Health (DOH) did not reflect the real situation in emergency rooms.

On Monday, around 500 private hospital personnel again trooped to the DOH office in Manila to protest the delay in the release of their special risk allowances (SRA) in addition to the meals, accommodation, and transportation allowances, or MAT.

“Remember, it’s been 16 days since President Duterte ordered [the release of the SRA]. The DOH released P311 million and then [requested] another P888 million but we still haven’t gotten anything,” said Jao Clumia, president of St. Luke’s Medical Center Employees Association.

Clumia said the amount only covered their SRAs between September and December 2020. The government has not allocated funding for the SRA from January to June this year.

He added that despite their protests in front of the DOH office, no official had come out to talk to them although “we’re tired of holding dialogues with them, anyway.”

Amid the government’s announcement that the NCR would be placed under the less restrictive general community quarantine beginning Sept. 8 (see related story on Page A1), Limpin said she hoped the President would “consider evidence regarding community quarantine measures.”

“If the intent is to help halt, even temporarily, the increasing COVID-19 [cases], a true lockdown should be imposed,” she said in a text message.

According to her, they also hope to see a contact tracing and isolation protocol standardized across all local governments as well as the stricter implementation of safe transportation and workplace guidelines before businesses are allowed to reopen.

“Impose also stricter border control, including those coming [to the] NCR,” Limpin said.