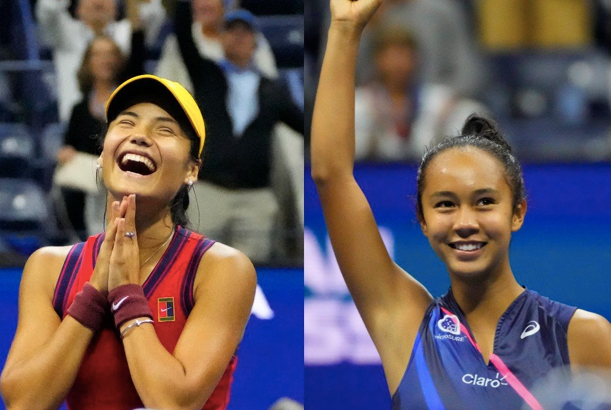 Two unseeded players, both teenagers, will face each other in a U.S. Open final for the first time.

Leylah Fernandez and Emma Raducanu both advanced Thursday night in New York and will face each other in the final Saturday in what will be the first Grand Slam final between unseeded players since the Open Era began in 1968.

Raducanu, an 18-year-old from Great Britain, swept 17th-seeded Maria Sakkari of Greece 6-1, 6-4 to become the first qualifier to reach a Grand Slam women’s singles final in the Open Era.

Fernandez is ranked 73rd in the world and Raducanu 150th.

The stunning surge came after a difficult summer for Fernandez. She lost in the first or second round of 11 consecutive events after winning her first career title at Monterrey, Mexico, in March.

Fernandez produced 26 winners and 23 errors in her semifinal win. Sabalenka, 23, had 45 winners but committed 52 unforced errors.

In the decisive third set, Fernandez broke serve for a 4-2 lead, but Sabalenka broke right back. With Sabalenka serving at 5-4 to stay in the match, Fernandez won four consecutive points to advance.

“I just wanted to be in the finals,” Fernandez said. “I fought for every point. I don’t know how I got that last point in, but I’m glad it was.”

Raducanu, who was born in Canada, played three more matches than Fernandez on her way to the final thanks to competing in qualifying. However, she actually has spent less time in court — 11:34 to Fernandez’s 12:45.

“I’ve been taking care of each day, and three weeks later, before you know it, I am in the final, and I can’t actually believe it,” Raducanu said.

Raducanu was the third woman with a ranked outside the top 100 to reach the semifinals in New York, joining Billie Jean King (1979) and Kim Clijsters (2009).

In the semifinal, Raducanu won 71 percent of her first-serve point while Sakkari won just 52 percent and double-faulted five times.