Public and SALNs: Not just a fixation 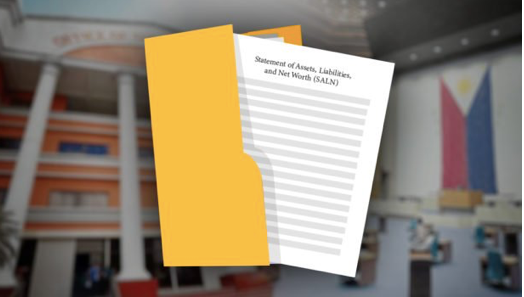 Ombudsman Samuel Martires, who was appointed as associate justice in 2017 and took office as Ombudsman in 2018, posed this question on Thursday (Sept. 10), during a hearing on the proposed P3.967 billion 2022 budget for the Office of the Ombudsman.

A SALN, or Statement of Assets, Liabilities, and Net Worth, is an important document that lists down a government official’s assets—cars, houses, cash in bank, business and financial interests—and liabilities.

The logic behind requiring government officials to file SALNs is that the document, which should be sworn to and notarized by the official, would serve as a window on the official’s finances and could offer clues on unexplained wealth.

But contrary to Martires’ statement, the public interest over SALNs of government officials—especially of the President and Vice President—is not just a fixation.

What’s in a SALN?

According to Republic Act (RA) No. 671, or the Code of Conduct and Ethical Standards for Public Officials and Employees, statements filed by public officials and employees should contain detailed information including:

The law also stated that the SALN should include assets, liabilities, net worth, and financial and business interests of the public official or employee’s relatives—specifically, their spouse and unmarried children under 18 years old who are living in the same household.

As an overview of the data that can be collected through accessing SALNs, below are the net worth of the country’s previous leaders.

For most of them, there was an increase in their declared net worth—starting from their first year in office until they stepped down.

From Corazon Aquino to the current president, documents showed that Gloria Macapagal Arroyo had the biggest jump in net worth.

According to copies of SALNs obtained by the Philippine Center for Investigative Journalism (PCIJ), Arroyo’s net worth jumped by 113.16 percent by the time she stepped down as president.

Ramos had the second-highest net worth increase—34.22 percent. He was followed by Noynoy Aquino—25 percent, Estrada–7.25 percent, and Cory Aquino—4.79 percent.

Amid the call for the release of Duterte’s SALN, the Office of the Ombudsman issued a memorandum circular saying it would no longer grant public access to SALNs without the concerned officials’ consent.

In September 2020, Martires issued new guidelines on who can obtain copies of government officials’ SALNS, limiting these to the official himself and officers conducting investigations.

In the old guidelines, the general public, media, and students may request SALNs from the Ombudsman — as long as they submit a properly filled out form and other necessary identification documents. 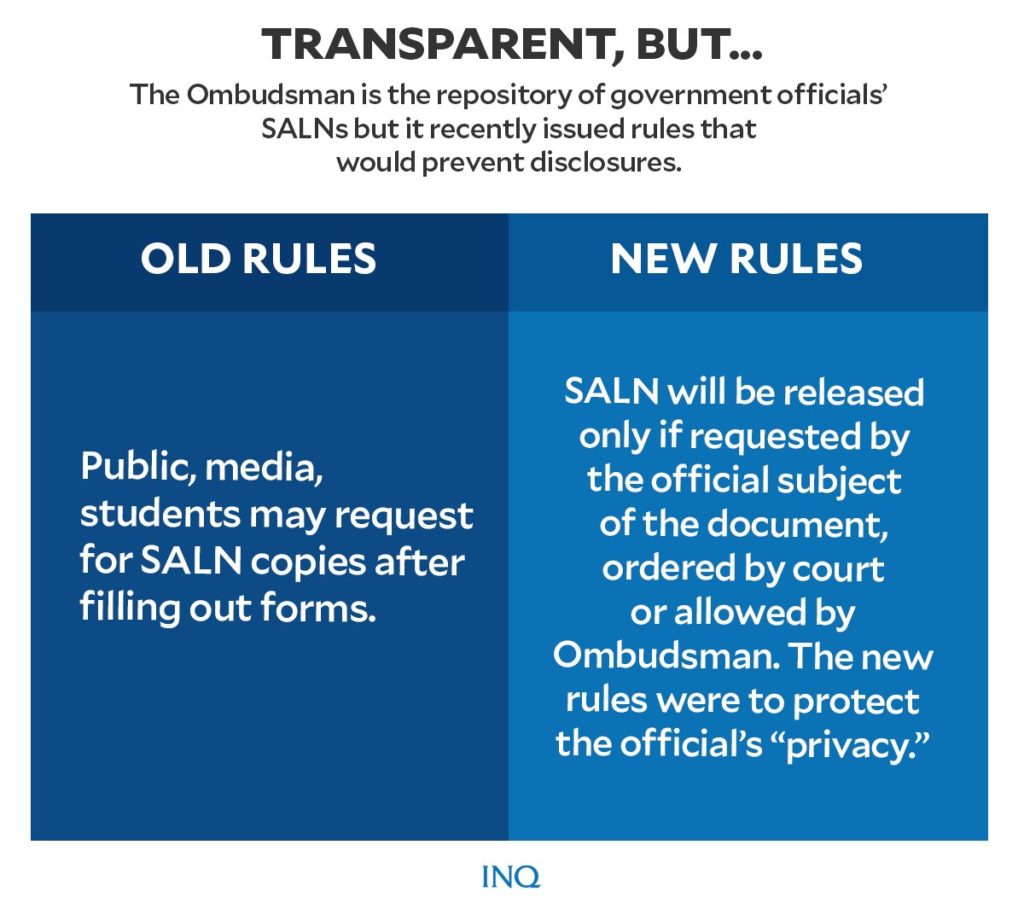 Memo Circular No. 1 meanwhile stated that SALNs would be released only when:

The memorandum also explained that government agencies cannot seek a copy of the SALN if the request is not supported by a notarized letter of authority from the official who filed it.

“To protect the right to privacy of the declarant whose SALN was the subject of a request, all SALN request forms shall be treated as part of the public record,” the memo said.

“All requests by government agencies for the SALNs of their officials and employees for any purpose shall be denied unless the request form is supported by the declarant’s notarized letter of authority,” the memo said.

“Except for the payment of the fees, the agency will be required to observe the above procedure in requesting the SALN,” it added.

READ: Ombudsman denies request of lawyers to get copy of Duterte’s SALN

Why is it important to be made public?

Section 8 of RA 6173 said that “the public has the right to know” the SALNs of public officials and employees.

The law said that SALNs must be made accessible for inspection at reasonable hours and must be available to the public for 10 years from receipt of the record.

“Any person requesting a copy of a statement shall be required to pay a reasonable fee to cover the cost of reproduction and mailing of such statement, as well as the cost of certification,” the law stated.

“Any statement filed under this Act shall be available to the public for a period of ten (10) years after receipt of the statement. After such period, the statement may be destroyed unless needed in an ongoing investigation,” it added.

Publicizing SALNs is more than just a “lifestyle check” as Martires had claimed.

In a budget hearing in 2020, Martires said he has stopped the conduct of lifestyle checks on public officials.

According to him, some of the provisions of RA 6173 are  “vague” and illogical.

He was pertaining to a provision of the law, which stated that: “public officials and employees and their families shall lead modest lives appropriate to their positions and income” and that “they should not indulge in extravagant or ostentatious display of wealth in any form.”

SALNs, according to former Ombudsman Conchita Carpio-Morales, is crucial for transparency as well as public trust.

“It does not carry out the spirit of the law which means that public office is a public trust and therefore you are supposed to be transparent,” Morales said in an interview, regarding the restriction of public access to the SALN of officials.

“Without those lifestyle checks, without the access to SALNs, you’re actually putting blinders not only on the press but on the public and that’s not a good thing for confidence in our government,” Diokno said in an interview in 2020 on ANC.

“It’s a very simple and yet effective way of finding out if our government officials are really doing their job and not just making money from their position,” he added.

“There are many other ways to show that you are anti-corruption. The SALN is one of the biggest ways to show transparency that there is no corruption,” she said, speaking in Filipino.

SALNs, according to World Bank, is considered as a crucial anti-corruption tool around the globe as it can “help deter the use of public office for private gain.”

“Income and asset disclosure (IAD) systems can provide a means to detect and manage potential conflicts of interest, and can assist in the prevention, detection, and prosecution of illicit enrichment by public officials,” World Bank said.

Commentaries on SALNs could lead to five-year imprisonment, according to Martires’ proposed amendment to RA 6173.

“One of the contentious provisions actually is on the SALN,” said Martires during his defense of the Ombudsman budget in Congress.

“I want to reconcile (R.A.) 6713 with 3019 (Anti-Graft and Corrupt Practices Act) on the SALN to provide safety nets so that a SALN can be published but no person should be allowed to comment on the SALN of a particular government official or employee,” Martires said.

“So what I am proposing is to make stringent penalties that anyone who makes a comment on this SALN of a particular government official and employee must likewise be liable for at least an imprisonment of not less than five years,” he added.

Martires claimed that he was a victim of “unfair reporting” by media that he said included commentary on his SALN after reports said his wealth grew by P15.3 million in a few months after becoming Ombudsman.

He said media outfits failed to clarify matters with him.

He also cited Section 8(D) of Republic Act No. 6713 in claiming that the media erred in commenting about his and other officials’ SALN.

Under the provision, it is unlawful for any person to obtain or use SALNs for:

Bayan Muna Rep. Carlos Isagani Zarate and Gabriela Rep. Arlene Brosas, on the other hand, slammed the Ombudsman’s proposal, saying it could pose a threat against freedom of speech and expression.

“Isn’t it dangerous to penalize our people if they ask questions because freedom of expression is guaranteed by the Constitution and also the principle of transparency and accountability?” said Zarate who was also present during the budget hearing.

“Any attempt to clip free discourse on the wealth of public officials is a direct attack on free speech, and a move to shield sitting officers from public scrutiny,” Brosas said in a statement.

Martires, to justify the imposed restriction of public access to SALNs, explained that the documents have been weaponized against public officials.

“According to the experience of the Ombudsman, SALN has been weaponized. It is being used as means to damage the reputation of a person, or besmirch a rival in politics,” Martires said during 2020 budget deliberations.

However, his move to restrict public access—and now to penalize critics for commentaries—was questioned by his predecessor.

According to Morales, whether or not a SALN is being weaponized should be the “concern of the politician.”

“If he believes that a request for SALNs is being weaponized by enemies of the politician whose SALN is being requested, then that is the concern of the politician but no one can refuse the request of anyone to use or to copy a SALN for as long as it is not against morals or public policy,” the former Ombudsman said.

Morales also added that public officials can file a case against the requestor if the SALN is to be used against moral or public policy.

“The requestor, if he is faulted, then he can be fined for not more than P25,000. So it’s the concern of the politician to fault the requester if the requested SALN is being used against morals or public policy,” she said.

SALNs, as a tool for transparency, has played a major role in the ouster of two chief justices in the past—Renato Corona who was impeached in 2012 and Maria Lourdes Sereno, a known critic of the Duterte administration, who was unseated in 2018. 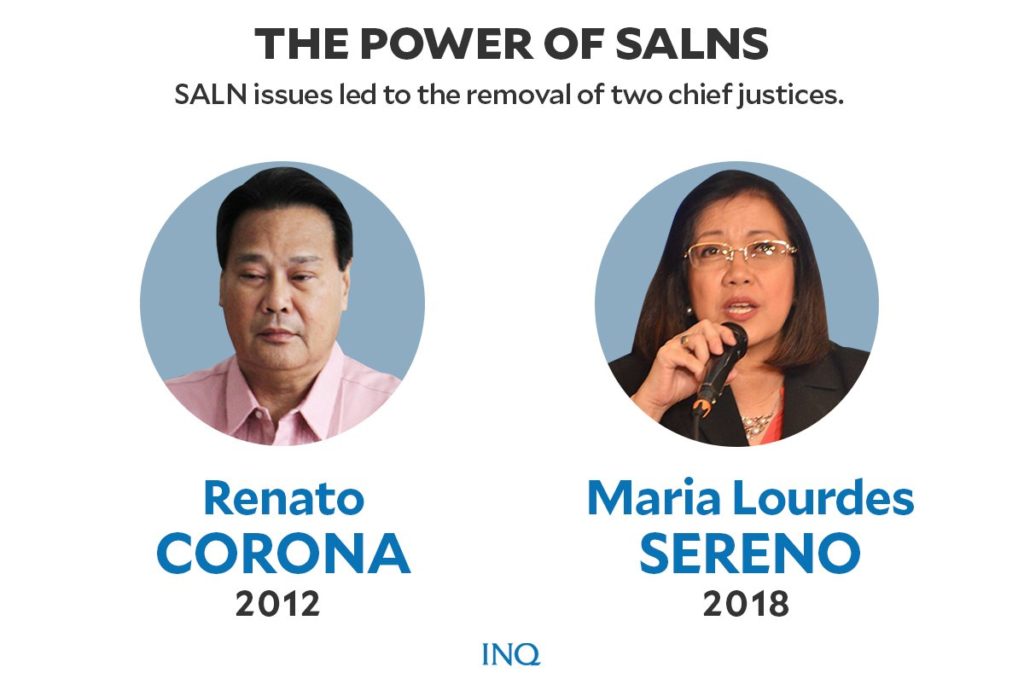 Both ex-chief justices have allegedly failed to disclose their accumulated wealth in their SALNs.

And government officials, as a policy, open themselves up for scrutiny by the public the moment they file their candidacies.