5 signs a text message is a scam 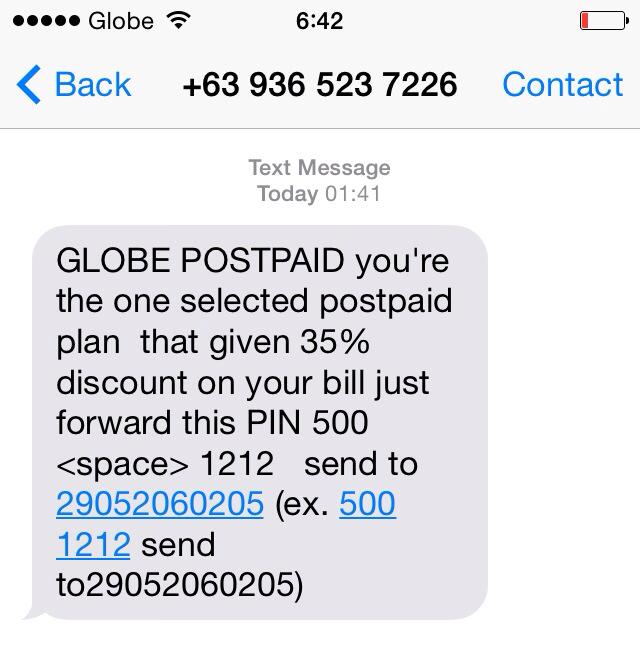 MANILA, Philippines–With more and more people becoming victims of text message scams, the Senate has  sought to probe what telecommunications companies and government regulators are doing against the illicit activities.

“There is a need to investigate how these swindlers get access to mobile numbers of postpaid subscribers and institute measures that will strengthen the protection of mobile phone subscribers,” Senator Manuel Lapid said in a Senate resolution calling for an investigation.

Globe has previously issued several ways to identify when a scam is legitimate or when it is a scam.

1. The sender of the message comes from an 11-digit mobile number

According to Globe, legitimate text messages from them or other businesses authorized to send text advisories will be labeled accordingly and will not come from an unidentified mobile number. This applies even if the text message body claims to be a “GLOBE ADVISORY.”

2. Some amount of money involved or sending a message to another number

Text message scams aim to extort money or load credits from others by tricking them to do a “Share-A-Load” transaction. The text scam falsely accuses the subscriber of incurring additional charges and provides the victim with a message format to be sent to a mobile number for an alleged refund.

A sample provided by Globe is as follows: “Globe LTE Advisory: Your postpaid account has been charged P500 for LTE use. Is this a wrong charge? Text 500 send to 2936XXXXXXX for REFUND.”

Crisanto said that “by adding the number “2″ before the 10-digit cell phone number of the recipient, the unsuspecting subscriber would have done a Share-A-Load transaction, thus the sum of 500 pesos in the two examples above would be transferred or credited to the prepaid number to which the message was sent to.

Globe also warned against text scams that involve winning prizes from raffles and stating the steps on how the customer can claim the alleged prize. These scams however aim to trick customers to give them money or load credits in exchange for the non-existent raffle prize. If you did not join any raffle contest, do not believe any text message about winning it.

Among the most common text scams involve those that call for help from relatives who are in trouble abroad. The “relative” allegedly encountered problems while on a trip abroad and requests for some form of monetary assistance often through load credits or sometimes through money transfer services.

5. Government agencies do not conduct transactions through text messages

Several text messages have previously proliferated claiming to be from the “President Aquino Foundation” informing the subscriber about winning hundreds of thousands of pesos in a raffle. The Department of Social Welfare and Development (DSWD) was implicated in the scam when the Pantawid Pamilyang Pilipino Program or Conditional Cast Transfer Program was cited as the host of the raffle.

DSWD secretary Corazon Soliman issued a public advisory saying that their agency does not hold raffles. There is also no such President Benigno Aquino Foundation.

“Globe customers may report via the Globe website through Talk2Globe Chat (http://chat.globe.com.ph); send a message through Globe Contact Form (http://globe.com.ph/talk2Globenow) and by tweeting @Talk2GLOBE on Twitter.

The National Telecommunications Commission which is mandated with regulating mobile services, has previously admitted the difficulty in stopping scammers because when they block a certain SIM  from sending messages, they can just get a new one.