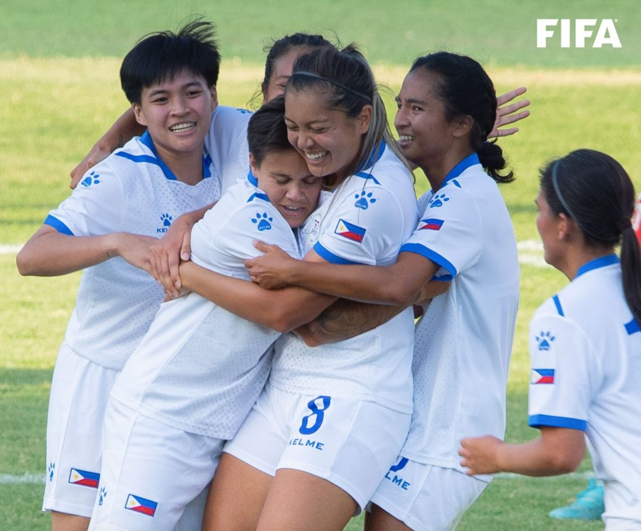 The Philippine Malditas celebrate after scoring a goal during their match against Nepal in the ongoing AFC Asian Cup Qualifiers in Tashkent, Uzbekistan. | Photo from FIFA (file photo)

CEBU CITY, Philippines — The Philippine Malditas or the Philippine Women’s National Football Team only needs a draw against Hong Kong tomorrow to book a ticket to the Asian Football Confederation (AFC) Women’s Asian Cup in India next year.

Their match in Group F of the ongoing Asian Cup qualifiers between Hong Kong in Tashkent, Uzbekistan will kick off at 6:00 PM (Manila Time) tomorrow, Friday.

Last Wednesday, Hong Kong and Nepal ended their match with a goal-less draw, which brightened the Malditas’ chances to qualify for the AFC Women’s Asian Cup.

The Malditas lead Group F with three points coming from their lone,2-1, victory against Nepal three days ago.

A draw which is worth one point will qualify them for the coveted AFC Women’s Asian Cup.

However, the team is gunning for a win to conclude their very fruitful campaign with an exclamation point.

If Hong Kong wins over the Malditas, the former will instead qualify for the AFC Cup.

The Philippine Malditas are currently ranked 68th in the FIFA global rankings while Hong Kong is at 76th.

The Malditas of head coach Marlon Maro will likely going to field in the same first 11 players in their match with Nepal.