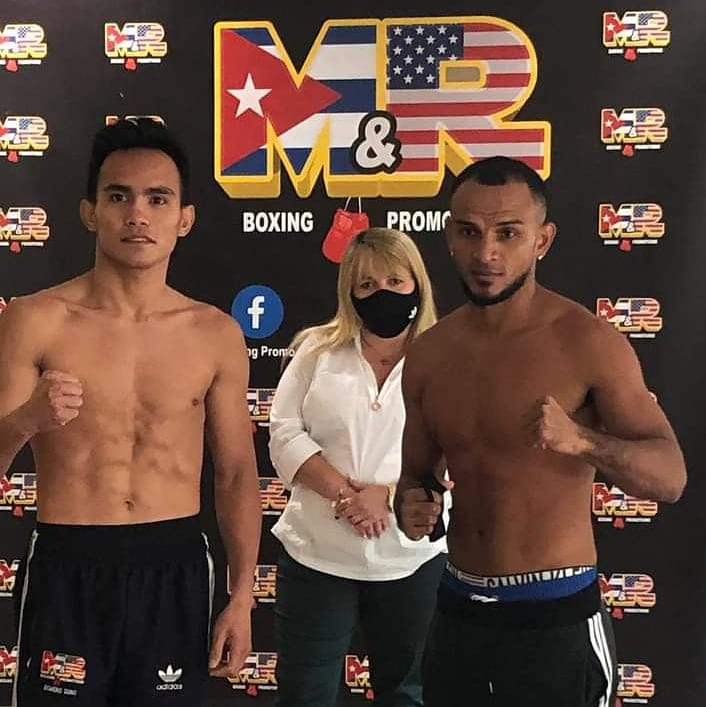 Romero Duno (left) and Jonathan Perez (right) strike a pose after passing the weigh-in for their non-title bout in Miami, Florida on Saturday (Sept. 25). | Photo from Sanman Promotions.

The 25-year-old boxer of Cotabato City tipped the weighing scales at 135.6-pounds while Perez was a bit lighter at 133.4lbs to schedule their eight-round non title showdown.

It will be Duno’s second fight in a span of a month. He easily knocked out Paraguayan Ramon Elizer Esperanza last August 20 at the Airport Hilton Hotel in Miami.

If victorious, Duno of Sanman Boxing Gym will stretch his winning streak to three bouts.

Duno is on a comeback journey following his 2019 knockout loss to American Ryan Garcia for the vacant WBC silver and WBO NABO lightweight titles.

Perez’s most recent bout was in June versus American Matt Conway. He lost to Conway via technical knockout for the vacant IBF intercontinental super featherweight title.