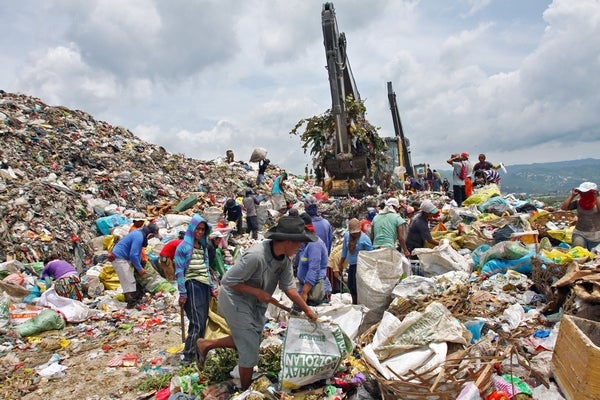 Scavengers sort out trash at the Inayawan landfill for a living. | CDN file photo

CEBU CITY, Philippines — Members of the Cebu City Council remain divided on an unsolicited proposal to reclaim pond A at the South Road Properties (SRP) and the planned development of the already closed Inayawan Sanitary Landfill.

Administration Councilor Joel Garganera, on the other hand, see the JVA as an opportunity for the City to already comply with the mandate of the Department of Environment and Natural Resources (DENR) to rehabilitate the landfill.

If a decision is not made before their terms ends on July 1, 2022, the JVA proposal will have to be decided upon by members of the next Sangunian who will also assume office then.

Expedition submitted its unsolicited proposal in 2014 to then Mayor Michal Rama and was awarded an Original Proponent Status (OPS) by November of the same year.

Negotiations with the Joint Venture Selection Committee (JVSC) continued until April 2016, after which Expedition was granted a declaration for successful negotiations.

A Swiss challenge was supposed to be scheduled next, but this did not happen during the term of former Mayor Tomas Osmeña who took over the city’s reign in 2016.

Expedition filed a case at a Quezon City court in December 2018 against the Cebu City government for specific performance.

On January 22, 2021, the court granted Expedition’s petition and ordered the JVSC to push through with the conduct of a Swiss challenge.

In August 2021 the JVSC, under incumbent Mayor Edgardo Labella, sent out invitations to Swiss Challenge.

During the Council session on Wednesday, September 30, Councilor Nestor Archival, the council’s minority floor leader, questioned the capacity of the City Council to allow Labella to proceed with the JVA when portions of the Inayawan Landfill are privately-owned.

Councilor Franklyn Ong said that former Mayor Osmeña even filed an adverse claim over the Inayawan landfill sometime in 2019, in an attempt to claim all landfill lots as a city-owned property.

During the Council session on Wednesday, Lawyer Alberto Agra, a public-private partnership (PPP) expert, said concerns on land ownership can still be pursued even after the JVA is signed.

This can be stipulated as amongst the obligations of the parties involved in the JVA.  Ownership concerns can be looked into before the issuance of the notice to proceed, he added.

“At this point, there is no obligation that has to be performed because there is no agreement yet. The fulfillment of those obligations will only come about after the agreement has been signed per the contract must be clear as to the obligations of each party so that both parties will be held accountable for the obligations stipulated in the JVA,” Agra said.

Lawyer Julietta Morales, the legal counsel for Expedition, said the details or nitty gritty of the agreement may be ironed out in subsequent negotiations that will follow the signing of the contract, even if this would mean involving a third party, in this case, the private claimants of portions of the landfill.

Morales said there is no way that the city will be at the losing end since Expedition will handle the cost of the project’s implementation.

Archival said that there is now an ongoing litigation involving portions of the landfill’s lot and this will take time to resolve.

If possible, Archival is asking the project proponent to include all title holders in the ongoing negotiation without having to wait for the court’s decision on the pending case.

Garganera, chairperson of the City Council’s committee on the environment, said the JVA comes at a time when the DENR is exerting pressuring for the city government to already rehabilitate the Inayawan landfill.

A Writ of Kalikasan was already issued in 2016 while DENR has already been sending warnings that the City could be held liable for its failure to rehabilitate the landfill.  The court has also been asking the city to submit a  monthly report on its initiatives.

“To me, the environmental impact of the sanitary landfill which has not been rehabilitated for the longest time, and here comes a private party. This is an opportunity for us to rehabilitate the landfill or else the DENR will file criminal charges against the city government. It doesn’t matter who owns the land,” Garganera said.

Agra said that at this point when the JVA is still being reviewed by different committees of the Cebu City Council, the city government can still introduce amendments to include the other lot owners.

But before they should proceed any further, Councilor Alvin Dizon asked that environmental experts be invited to appear before the City Council to discuss the current state of the Inayawan Sanitary Landfill and discuss its environmental impact. / dcb