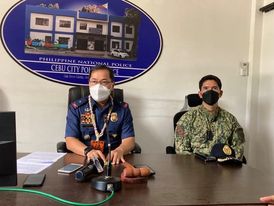 Vega said that as they take the drug-campaign to another level they should also maintain their integrity and implement the flagship programs of the Philippine National Police such as the the drug campaign.

“We should maintain our integrity as police officers. Beginning today, we should take our anti-illegal drugs campaign a notch higher in order for us to provide safer communities along with other flagship programs of the PNP,” he said.

“As we move forward, let us not be complacent, of our safety against the criminals and the virus that is still within our midst,” he said.

Vega lauded the CCPO for maintaining the peace and order in Cebu City, stressing that they have shown resilience amid the different times and protected the public against the unseen and tangible ones.

“You have [been] persistent in your duties to uphold the law, protected the people from criminals, [and] at the same time tightened the security and implementation of the health protocols,” said Vega.

“We are moving towards the new normal and we continue to intensify the campaign against the illegal drugs and illegal gambling and all forms of criminality,” he added.

In an interview, Vega said that so far, he has seen the good performance of the CCPO, particularly on the war on illegal drugs.

He noted the achievement of the Mambaling Police Station for confiscating a total of P6.9 million worth of drugs in a sting operation on September 30, which also led to the arrest of a high value individual under the watch list.

Another set of awards was given by the Department of Interior and Local Government in Central Visayas (DILG-7), DILG Cebu City Ian Kenneth Lucero gave the award to the Sawang Calero Police Station as the top performing station in Cebu City for its exemplary accomplishments of the campaign against illegal drugs, illegal gambling, loose firearms, and wanted persons during the third quarter of 2021.

Officers from other stations and units also received commendation awards on Thursday for their exemplary accomplishments.

In addition, the regional director also emphasized the importance of fully-implementing the whole-of-nation approach to end the local communist armed conflict in coordination of other government agencies.

“I would like to remind everyone of the intensified cleanliness policy. Let us continue in maintaining the cleanliness offices community and among the ranks,” he said.

Prior to his command visit at the CCPO, he already went to the Cebu Police Provincial Office since he assumed his post.

He said he is set to visit other police offices in the region, including in Lapu-Lapu, Regional Mobile Force Batallion, Negros Oriental, Siqujor and Bohol in the following weeks.

Montejo retires as PRO-7 chief; Vega to take over as new director