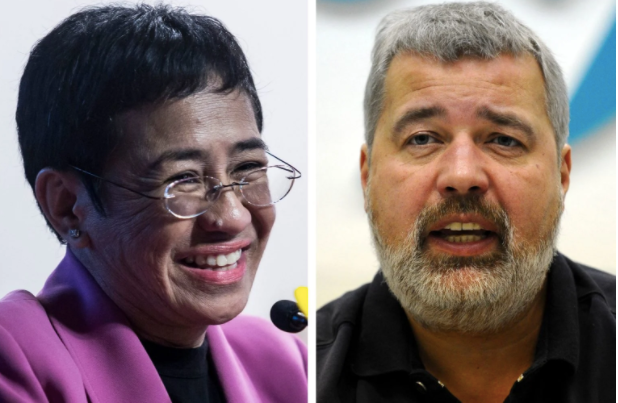 OSLO — Maria Ressa of the Philippines and Dmitry Muratov of Russia, journalists whose work has angered authorities in their countries, were awarded the Nobel Peace Prize on Friday, honoring the right to free speech which remains under threat around the globe.

The journalists were cited “for their courageous fight for freedom of expression in the Philippines and Russia … for their efforts to safeguard freedom of expression, which is a precondition for democracy and lasting peace,” said Berit Reiss-Andersen, chair of the Norwegian Nobel Committee.

“At the same time, they are representatives of all journalists who stand up for this ideal in a world in which democracy and freedom of the press face increasingly adverse conditions,” she added.

The first Filipino to receive the honor, Ressa, 58, is Rappler chief executive officer who co-founded the digital media company for investigative journalism in 2012.

Muratov, 59, has meanwhile defended freedom of speech in Russia for decades, under increasingly challenging conditions.

In 1993, he was one of the founders of the independent newspaper Novaya Gazeta, which has a “fundamentally critical attitude toward power” the committee said, and has been its editor in chief since 1995.

“Without freedom of expression and freedom of the press, it will be difficult to successfully promote fraternity between nations, disarmament, and a better world order to succeed in our time,” Reiss-Andersen said.

The prize is the first for journalists since the German Carl von Ossietzky won it in 1935 for revealing his country’s secret postwar rearmament program.

“I am in shock,” Ressa said at a live broadcast by Rappler early Friday evening.

She stressed the continuing danger posed by revisionism and efforts to harass Filipino journalists. Rappler has been a target of President Duterte who has been displeased by its reports on his administration.

“We’ve said this since 2016, that we are fighting for facts. When we live in a world where facts are debatable … In the battle of facts, I guess this shows that the Nobel Peace Prize committee realizes a world without facts is a world without truth and trust.”

Rappler executive editor Glenda Gloria said the prize “could not have come at a better time—a time when journalists and the truth are being attacked and undermined.”

Malacañang has not issued a statement on Ressa’s prize as of press time.

Vice President Leni Robredo told Ressa her award “is a recognition and affirmation of your tireless efforts to hold the line for truth and accountability.” Former Supreme Court spokesperson Theodore Te said he “can put in my resume [that] I am the lawyer of a Nobel laureate.”

Musician Ely Buendia chimed: “Finally something we can be truly proud of. Maria’s got more b**** than any of [this] country’s so-called strongmen.”

Friends from the international community also posted their greetings.

European Commissioner for Cohesion and Reforms Elisa Ferreira said Ressa’s award was “a just recognition that freedom of expression is a precondition for democracy and lasting peace.”

So far, three individuals and one organization from the Philippines have been nominated for a Nobel Prize since its creation in 1901.

Carlos Romulo was first to be nominated for a Peace Prize in 1952 for his “contribution in international cooperation … and as president for [the] UN’s 4th General Assembly.”

In 1929, Otto Schöbl, head of the Biologic and Serum Laboratory and a member of the Philippine Bureau of Science, was considered for the Nobel Prize in Physiology or Medicine for his “experimental work” that contributed to knowledge of the “etiology and pathogenesis of treponematous infections.”

Proceso Gabriel, bacteriologist and medicine professor at the University of Santo Tomas, was also nominated in the same category that year for “contributions to the public health and the sanitary progress of the Philippines.”

In 1967, the United Poets Laureate International, an international organization founded in Manila, was nominated for a Peace Prize for “promoting world brotherhood and peace through poetry.”

Ressa’s recognition will be formalized on Dec. 10, the anniversary of the death of Swedish industrialist Alfred Nobel, who founded the awards in his 1895 will. —REPORTS FROM Reuters AND AFP