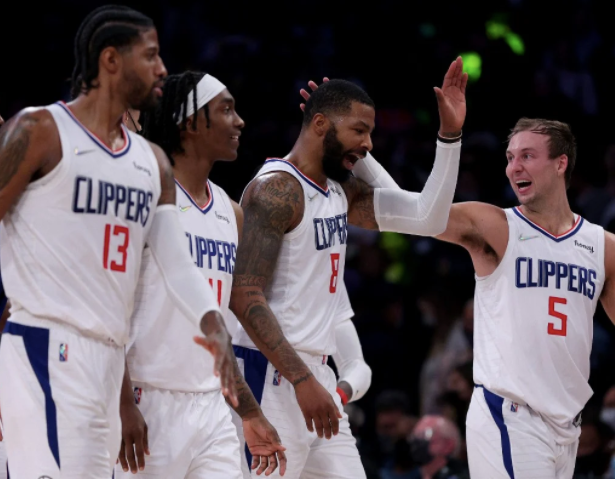 Marcus Morris Sr. #8 of the LA Clippers celebrates his three-pointer with Luke Kennard #5, Terance Mann #14 and Paul George #13 during a 119-115 win over the Los Angeles Lakers at Staples Center on December 03, 2021 in Los Angeles, California. Copyright 2021 NBAE Harry How/Getty Images/AFP

Marcus Morris had a season-high 21 points and Paul George added 19 as the visiting Los Angeles Clippers held on for a 119-115 victory over the Los Angeles Lakers on Friday in the first meeting of the season between the intracity rivals.

Luke Kennard also had 19 points for the Clippers, including two late 3-pointers, while Reggie Jackson added 16 as the Clippers ended a three-game losing streak by winning a “road” game for the first time since Nov. 5.

Marcus Morris Sr. with his SIXTH triple of the night!

The big bucket seals the win for the @LAClippers! pic.twitter.com/GZrLwsyn3F

Anthony Davis scored 27 points with 10 rebounds for the Lakers, while LeBron James had 23 points with 11 rebounds after missing Tuesday’s contest at Sacramento while in COVID-19 protocol. The Lakers saw their brief two-game winning streak come to an end.

The Clippers pushed their winning streak to four games over the Lakers in the past two seasons and have not lost to their Staples Center co-tenant since the first game of the NBA restart near Orlando at the end of the 2019-20 season.

The Clippers had their biggest lead of the first half at 51-40 with 1:30 remaining before the break, although the Lakers fashioned a quick 10-2 run to pull within 53-50 at halftime.

The Clippers rebounded to outscore the Lakers 34-29 in the third quarter by shooting 7 of 15 from 3-point range, while grabbing an 87-79 advantage.

The Lakers never led, but they pulled within one at 110-109 with 2:15 remaining after a Carmelo Anthony 3-pointer and had the ball to take the lead twice before Kennard hit a 3-pointer for a 113-109 Clippers advantage with 1:12 remaining.

Malik Monk had 20 points off the bench for the Lakers, while Russell Westbrook had 10 points and nine assists, and Anthony had 13 points.

George added nine assists and eight rebounds for the Clippers, while Ivica Zubac had 12 points.

The Clippers altered their starting lineup to counter the Lakers’ size, bringing guard Eric Bledsoe off the bench for the first time. He scored eight points in 18 minutes. Clippers forward Nicolas Batum missed his seventh consecutive game in COVID-19 protocol.

Kings down Clippers for latest win at Los Angeles

Read Next
Tommy O on substitution: I did not run for Congress because I wanted to stay in Cebu City