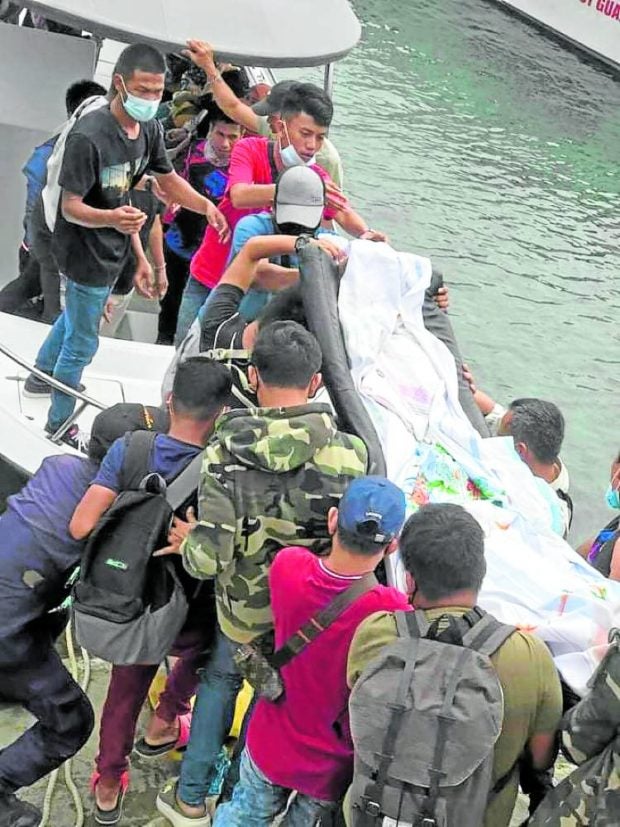 AL-BARKA GRIEVES: The remains of Al-Barka Mayor Darussalam Lajid arrive in his hometown for burial on Monday, following his murder in Zamboanga City earlier that day. —PHOTO FROM FACEBOOK PAGE OF MAYOR DARUSSALAM LAJID

Col. Rexmel Reyes, chief of the Zamboanga City Police Office, said Lajid died at 9:45 a.m. as he was rushed to Brent Hospital.

The slain mayor had been accompanied by Mayor Alih Awal Sali of Akbar town, also in Basilan, their driver (and Sali’s cousin) Farrad Nurrudin and other escorts, as they were on their way to a seaside mosque when they were ambushed by four unidentified gunmen on motorcycles, police said.

Nurrudin was also killed, while Sali was still in critical condition as of this reporting.

According to the police, the assassins changed vehicles. Some fled using a motorized boat and others drove away in a white Ford sedan.

His constituents in Al-Barka described Lajid as a cheerful person, approachable, and a natural leader who restored peace in what used to be a battle-scarred town.

They also described him as being “fearless” before the dreaded Abu Sayyaf—the mayor who “cleaned his turf of banditry.”

“He was a good man, one of the few leaders able to bring other warring groups to peace,” said Hadji Dan Asnawie, commander of the 114th Base Command of the Moro Islamic Liberation Front in Al-Barka.

Asnawie also said that Lajid “actively weeded our town of bad elements like the Abu Sayyaf. We owe him the peace we enjoy today.”

Arlyn Jawad Jumaoas, executive director of Save the Children of War in Mindanao, said the entire province of Basilan lost a peace lover and a humanitarian worker.

“He has been our active partner in humanitarian works, especially in Al-Barka,” she said. “We are witnesses to his sacrifices in making Al-Barka a safe town for his people. He worked hard even during the time when there was no IRA (internal revenue allotment) for his town.”

Lajid was a retired policeman when he entered politics in Al-Barka in 2013 and won the mayoral race.

Al-Barka is an old community but a fairly new municipality. It was created through the Muslim Mindanao Autonomy Act No. 191 which the Regional Legislative Assembly of the Autonomous Region in Muslim Mindanao passed on Dec. 20, 2005. That law was ratified in a plebiscite on May 22, 2006.

His supporters said Lajid instituted many changes in Al-Barka and made it one of the most peaceful municipalities in Basilan.

His camp also had a long-standing “rido,” or clan feud, with the group of Vice Mayor Mujib Jakilan. But they brought this feud to an amicable conclusion on Nov. 20 at the headquarters of Joint Task Force Basilan, as witnessed by its commander, Brig. Gen. Domingo Gobway.

Despite these peacekeeping efforts, Lajid had been targeted for assassination since he won as mayor of Al-Barka, Jumaoas said.

In an earlier interview with the Inquirer, Lajid confirmed that he was the target of an ambush in Barangay Ginanta on Aug. 3 in which his nephew, Amman Lajid, was killed.

“I was in Zamboanga City buying construction materials when the incident took place,” he said in the interview the day after the ambush.

Lajid’s predecessors were also assassinated although they were no longer in office and were back in private life when they were killed.

Karam Jakilan, who was murdered in 2009, was appointed the first mayor of Al-Barka soon after the 2006 plebiscite ratified the law that created the municipality.

His successor, Muhammad Kabukisan, was elected mayor in 2007 when Al-Barka held its first election and served until 2013. He was killed in a rido in 2015.

In a statement, House Deputy Speaker Mujiv Hataman said: “I condemn the people behind the shooting [of Lajid and Sali] and call on the authorities to … investigate the murder of a public official and the wounding of another.”

“We may not belong to the same party but as Basileños, we—with Mayor Lajid and Mayor Sali—aspire for the good of our province and our fellowmen. They’ve been my friends in the Basilan Peace Riders and the Basilan Practical Shooters Association,” Hataman also said.

“We hope that a thorough and independent investigation will be conducted into this incident, and we hope for the speedy recovery of those who were wounded in the shooting. And we pray that justice be served on those who are guilty in the crime,” he said. —WITH REPORTS FROM RYAN ROSAURO, NESTOR CORRALES AND INQUIRER RESEARCH

Read Next
Clearing of Sulpicio exec in 2008 sea tragedy opposed