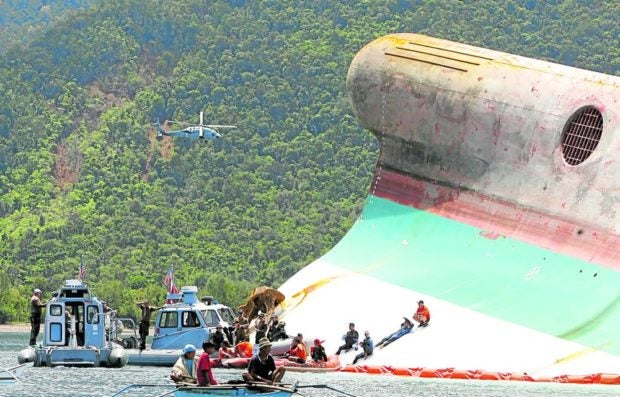 SIBUYAN TRAGEDY In this 2008 photo, teams from the US Navy and Philippine Coast Guard start search and rescue operations for passengers and crew of the sunken MV Princess of the Stars in Sibuyan Sea. —INQUIRER FILE PHOTO

MANILA, Philippines — The Department of Justice (DOJ) has asked a Manila court to overturn its decision absolving an executive of Sulpicio Lines from criminal liabilities in connection with the 2008 sinking of MV Princess of the Stars that left more than 800 people dead.

In appealing the Nov. 18, 2021, ruling of the Manila Regional Trial Court Branch 54, the DOJ prosecutors said they were not given the chance to respond to the demurrer to evidence that Edgar Go, then Sulpicio Lines vice president for administration, filed.

The demurrer to evidence that saved Go from standing trial for one of the country’s worst sea tragedies, is, in effect, a motion to dismiss on the ground that the evidence presented is insufficient.

The state prosecutors said they received an electronic copy of Go’s petition only two days before the court granted it.

“Strangely, no electronic copy of this demurrer to evidence was received by the prosecution despite the fact that (the) accused and his counsel are aware of the email addresses of the prosecution panel,” read the DOJ prosecutors’ 17-page motion for reconsideration dated Dec. 1.

Under the Rules on Criminal Procedure, they said that they should have been given 10 days after receiving a copy of the petition to file their comment.

“Fair play dictates that these rules must not be set aside and reduced to a mere ceremony to the prejudice of people, who, in this case, are still yearning for justice for the loss of their loved ones for more than 13 long years now,” the state prosecutors said.

The DOJ prosecutors also refuted the court’s conclusion that there was not enough evidence to proceed with Go’s trial for reckless imprudence resulting in multiple homicide, damage to property and serious physical injury.

No less than the Supreme Court, they pointed out, had declared Go’s possible culpability in the sea mishap in a resolution it issued on Dec. 18, 2018, that reinstated his criminal indictment.

The government prosecutors said the court should have “taken judicial notice” of the high tribunal’s ruling.

“The facts upon which the honorable Supreme Court found probable cause to indict accused Go belie this honorable court’s finding that there is nothing that proves the culpability of accused Go,” they said.

“Absent any valid defense established by the accused, these facts undoubtedly establish accused’s guilt beyond reasonable doubt,” they noted.

The DOJ prosecutors added that the high court had already passed upon Go’s claim that he had no responsibility in determining the movement of the ill-fated passenger ship, which was on its way to Cebu City from Manila.

Citing the 2018 decision, they pointed out that the justices ruled that Go “failed to closely monitor and assess the movement of the vessel as against the movement of Typhoon Frank.”

The high court said Go could have instructed the ship’s captain, Florencio Marimon, to “take shelter in the vicinity of Batangas” after the state weather bureau warned that it “would come face to face with the eye of Typhoon Frank if it continued along its regular route.”

“[T]here was an explicit and reasonable conclusion drawn by the DOJ panel that respondent’s act of allowing the vessel to sail despite the severe weather condition at that time demonstrated inexcusable lack of precaution on the latter’s part,” the Supreme Court ruled then.

Sulpicio officials earlier claimed that “an act of God” — not engine failure — sank the ferry. They also accused the Philippine Atmospheric, Geophysical and Astronomical Services Administration (Pagasa) of gross negligence, saying that inaccuracies in its forecast caused the ship to find itself in the eye of the storm, leading to its sinking.

In August 2008, the Board of Marine Inquiry said in a 62-page report on its investigation into the incident that Sulpicio Lines was responsible and called for the suspension of its license to operate.

On June 25, 2009, upon the order of the DOJ, criminal charges were filed in the Manila RTC against Go and Marimon, whose death in the sinking had yet to be validated.

In March 2010, the DOJ denied a petition for review filed by Go, who then filed a motion for reconsideration that was denied on June 8, 2010. However, on March 22, 2013, the Court of Appeals (CA) said that Go’s act of allowing the officers of the vessel to decide whether to sail “did not make him criminally liable as such decision was within the authority of the captain of the vessel in coordination with the (Philippine Coast Guard) in view of the weather bulletin.”

In a December 2018 ruling, the Supreme Court’s Third Division ordered the Manila RTC Branch 5 to reinstate the criminal case against Go, reversing the CA’s rulings in March 2013 and January 2014.

In October 2021, the Public Attorney’s Office announced that the Cebu court had ruled in favor of indemnifying the heirs of the people who died in the accident. The total award was more than P200 million. —WITH A REPORT FROM INQUIRER RESEARCH