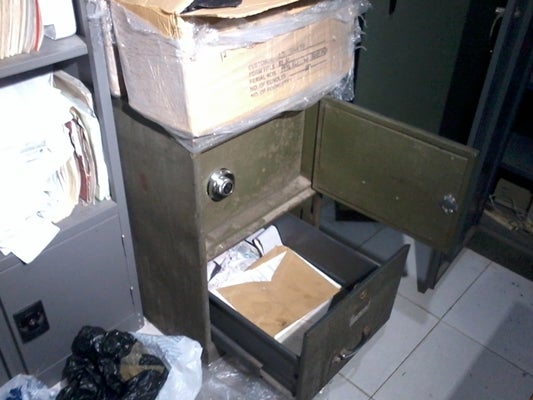 The National Bureau of Investigation (NBI) was called in yesterday after Toledo City became the fifth target of a burglary spree that has victimized muncipal treasury offices.

The steel vault of the Toledo city treasurer’s office was cracked open and emptied of a still unaccounted part of a P6 million payroll for teachers and casual employees.

Three “persons of interest” with access to keys of the vault or office were escorted to the NBI office in Cebu City about 3:30 p.m.

Toledo City Mayor John Henry “Sonny” Osmeña said he wanted the NBI to conduct a lie detector test and solve the heist within a week.

“Not yet,” said NBI Regional Director Max Salvador, who sent a team to Toledo at the mayor’s request and had fingerprints dusted off the crime scene.

The loss was discovered about 6 p.m. Sunday after four other towns – Compostela, Carmen, Sogod and Pinamungahan – fell victim to burglaries, which took advantage of holidays, sleepy Sundays and lax security in municipal halls located near police stations.

The first heist was discovered in Aug. 25, National Heroes Day, when almost P56,000 was taken from desk drawers of treasury clerks in Sogod and P4,800 was lost from an office desk in Carmen.

The robbery in Toledo city involved the biggest amount, a P6 million payroll for teacher’s salaries, some of which was already disbursed.

The office door was forced open, and the lock of the metal door of the vault was shattered, said Toledo Legal Officer Glenn Cadava.

A bundle of P95,000 in bills was left in the vault, possibly overlooked because the money was in a tray with other documents.

Senior Supt. Noel Gillamac, Cebu provincial police director, who earlier admitted the series of robberies was a “slap in their face”, held a case conference yesterday afternoon with police chiefs of the four towns.
They all said an “inside job” was their most likely lead and recommended that mayors hire private security guards and install Closed Circuit Television (CCTV) cameras.

“It’s up to the mayors what they will do with the recommendations,” Gillamac said.

A municipal employee in Carmen who reported the loss of P4,800 of his own money was recommended for a lie detector test.

Polygraph results are not admissible as evidence in court, but investigators find them useful in checking the reliability of witnesses and suspects.

A person has to willingly undergo a lie detector test; it cannot be administered against his will.
“We want the truth to come out… We also don’t want to discount the possibility that these (reports) are all fabricated,” said the police chief.

In the wake of a budget quarrel with the City Council last May, Osmena said the guards have not been receiving their salaries regularly and lost interest to work.

One guard was on duty at the time the robbery took place.

A City Hall market collector, Lynmar Caballero Formento, who arrived Sunday evening to render overtime in encoding official receipts of the collection discovered the vault already open and the money gone, according to police.

Some public school teachers who came Friday already received their allowances before 5 p.m.

Others assigned in the mountain barangays were looking forward to Monday when payroll masters were supposed to continue distribution.

Cavada estimated that 20 percent of the teachers have not yet received their allowances. He asked the teachers and casual employees to be patient while City Hall looks for other sources to replace the missing payroll money.

Cavada said an “inside job” was a strong possibility because there was no sign of forced entry.

A parallel investigation is being made by the newly installed police chief of Toledo City, Ricky Delilis.
“It’s my first official day as police chief after Friday’s turnover. I’m supposed to be excited to execute my roles but this incident is a challenge,” he said.

The vault and stell cabinets were in a smaller room of the treasurer’s office.

One security problem, said Cavada, was the lax system of safety keeping the keys of the Toledo City Hall.
No one was clearly designated for this task.

“The style here is whoever was the last to go home would hold the key. So practically anybody had access to the key,” he said.

Mayor Osmeña said it was time to hire private security guards and not rely only on the Civil Security Unit (CSU) of Toledo.

He said he told the City Council in May to install CCTV cameras in City Hall but the city legislature, which is dominated by the opposition, didnt’ approve it.

The P95,000 left in the vault was separately placed under a red plast tray where some official receipts and vouchers were kept. It’s possible the robber overlooked it.

The employee who discovered the burglary and reported it to the police is being questioned.

The assistant treasurer said Formento’s visit on a Sunday was unauthorized.

Formento told police he was at the office about 4 p.m. To 6 p.m. And had a key to enter City Hall.

“It makes us ask why Formento took two hours to report the burglary to us when the police station is just three kilometers from City Hall,” said Delilis.

“We found out that the culprit was able to enter the treasurer’s office by opening the wooden door with a small, sharp object. The metal door’s knob leading to the storage room where the vault was kept was destroyed. The vault itself was not destroyed.”

Read Next
P20M dredging of Mahiga river: Where will silt go?