CEBU CITY, Philippines — Cebu City and Mandaue City has been raised to Alert Level 3 from January 14 to January 31, 2022, in a new pronouncement by the Interagency Task Force (IATF).

Acting Presidential Spokesperson, Secretary Karlo Nograles, announced on January 12, 2022, that 28 provinces and cities are placed under Alert Level 3 including Cebu City and Mandaue City because of the rising COVID-19 cases in these areas.

Other areas in the Visayas placed under Alert Level 3 include Bacolod City, Aklan, Capiz, Antique, and Tacloban City. 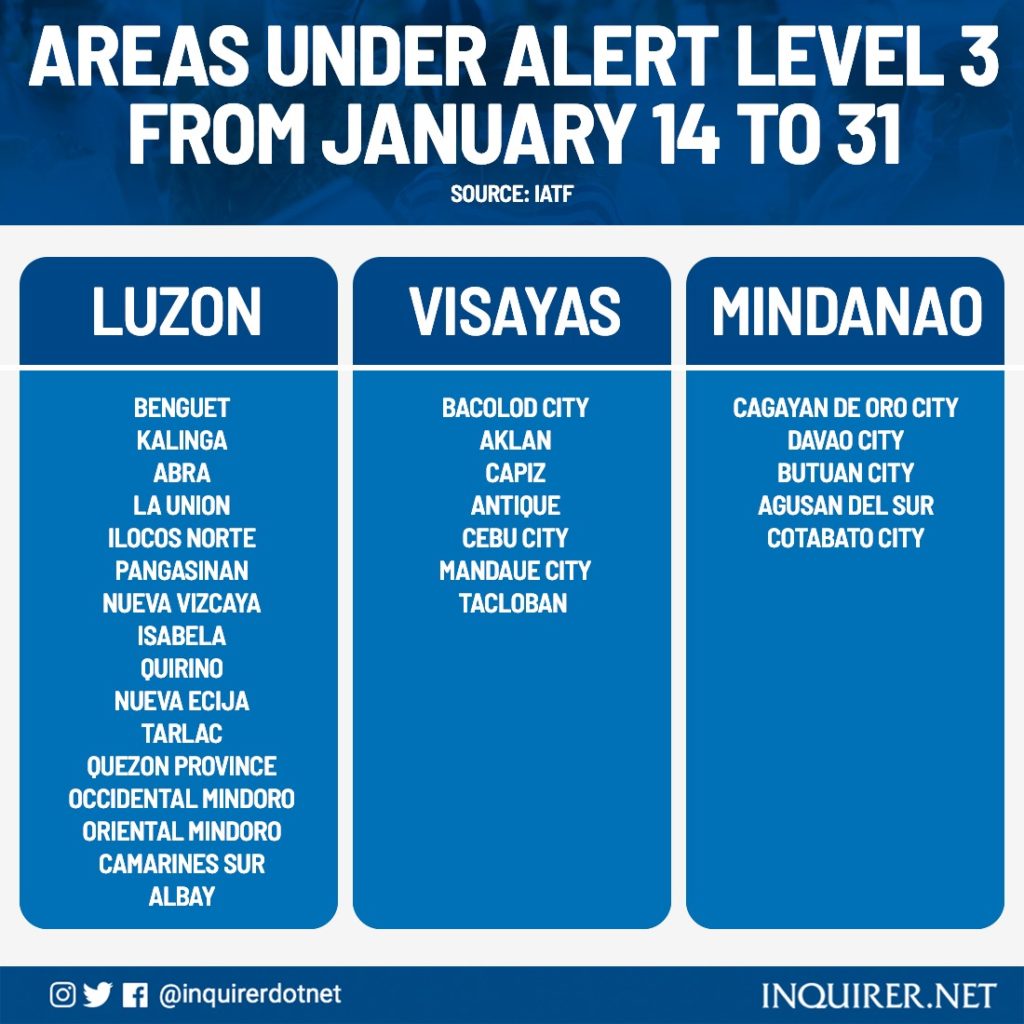 Cebu City has seen a rapid increase of active cases in the first days of the year with the cases reaching 778 as of January 11, 2022. In comparison, Mandaue City trails far behind with only 143 active cases on the same date.

Lapu-Lapu City, which was previously placed under Alert Level 3, is no longer on the list after Mayor Junard Ahong Chan appealed their case.

Yet, Cebu City Mayor Michael Rama will not be appealing the city’s raised alert level status considering the rising cases.

“We will have to review what are the activities under Alert Level 3. No appeal. We should not be appealing now. We can see the figures rising. We don’t want any trouble right now, we want to focus on recovery,” said the mayor.

Rama understands that implementing the Alert Level 3 status in a typhoon-struck city with many homes damaged and residents still reeling from the aftermath of the typhoon will be a challenge.

To address the concerns of residents still suffering from lack of basic utilities in their homes, Rama has met with Visayan Electric and the telecommunication companies on Wednesday.

Rama told CDN Digital that Globe and Smart promised to fix connectivity within three days, just in time for the implementation of the Alert Level 3.

“If VECO will provide power, then our telcos can restore the connectivity,” said the mayor.

Cebu City Councilor Joel Garganera, the deputy chief implementor of the EOC, hopes the IATF will give Cebu City a leeway in the implementation of the Alert Level 3 status considering the damages from the typhoon.

“I don’t know their basis aside from the increasing number of cases, we have other areas that they need to consider, our hospital occupancy, mortalities (none), our degree of response and intervention in spite of the fact that we just survived the strongest typhoon ever to hit our city in many decades.”

Mandaue City officials are yet to give a statement on the new Alert Level status.

Under Alert Level 3, intrazonal and interzonal travel are subject to “reasonable restrictions” that may be imposed by local government units, the IATF said.

Individuals aged 18 below and those belonging to the vulnerable population are also permitted access and travel to procure and avail essential goods and services and for work.

The following establishments and activities are prohibited under the more stringent alert level:

The following activities, on the other hand, will be allowed with 30-percent indoor venue capacity for fully vaccinated individuals and 50-percent outdoor capacity:

Currently, Alert Level 3 is raised over 19 areas including Metro Manila and its adjacent provinces Bulacan, Cavite, Rizal, and Laguna.