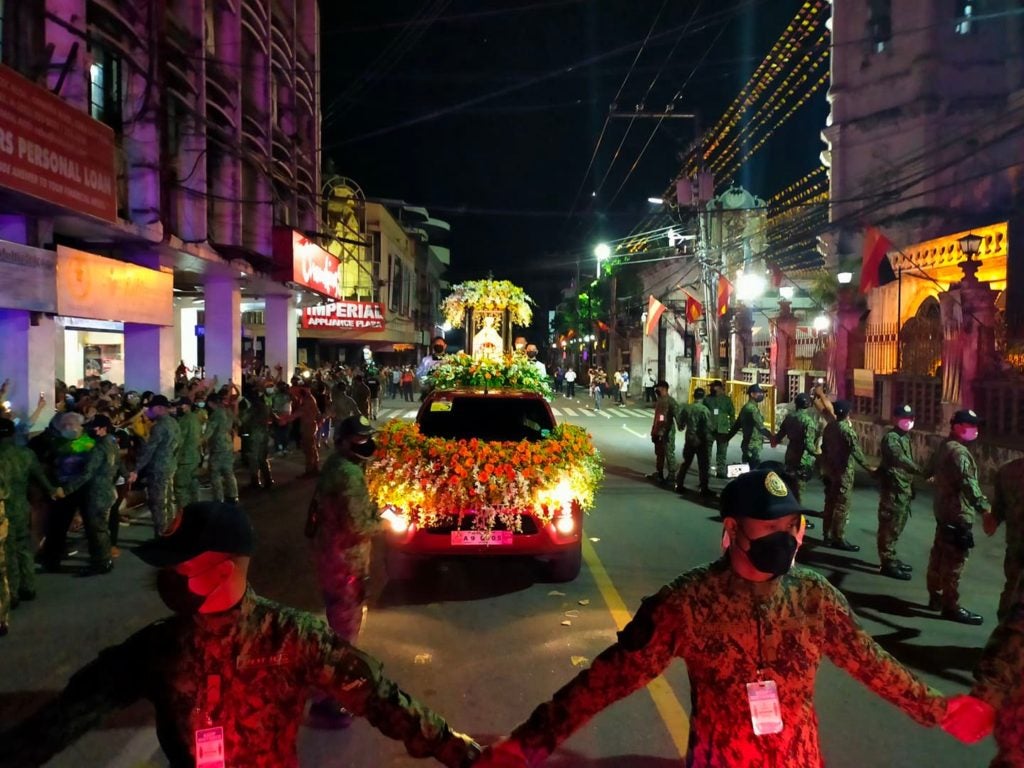 The mobile procession began at around 6:35 p.m. | Delta Letigio

CEBU CITY, Philippines — Nothing could ever stop the faith of the Cebuanos.

Despite the repeated appeals of the local government units (LGUs), the police, and the Basilica Minore del Sto. Niño, the public still waited in droves along the route of the mobile procession to show their devotion to the Holy Child.

The image of the Sto. Niño left the Basilica located along Osmeña Boulevard in Cebu City at 6:35 p.m.

A huge crowd was waiting at the sidewalks of Osmeña Boulevard and its nearby intersections including Colon Street.  The mobile procession was headed for Talisay City then via Natalio Bacalso Avenue.

Cebuanos were waiving flaglets as they bid goodbye to the Sto. Niño.

Patients and healthcare workers peeked through the windows of the Cebu City Medical Center (CCMC) that is located along N. Bacalso Avenue as they waved their hands.

Motorists who were in the area then stopped to gaze at the passing image.  Some sounded their horns.

At least five vehicles joined the mobile procession, one was occupied by Cebu Archbishop Jose Palma.

The image of the Sto. Niño was mounted on a pick up truck.

When the procession reached the vicinity of the Holy Cross Parish in Barangay Basak Pardo, an even larger crowd awaited. It was the first church to be visited by the Holy Child for a very quick stop that only lasted for about a minute.

The next stop was at the San Nicolas de Tolentino Church in Barangay Poblacion Pardo. The national highway was impassable then as it was filled by a sea of devotees.

Fireworks were lighted to greet the Sto. Niño. A live band also played while devotees danced the Sinulog.

At past 7 p.m., the mobile procession crossed to Talisay City and was greeted by loud cheers and applauses from residents. 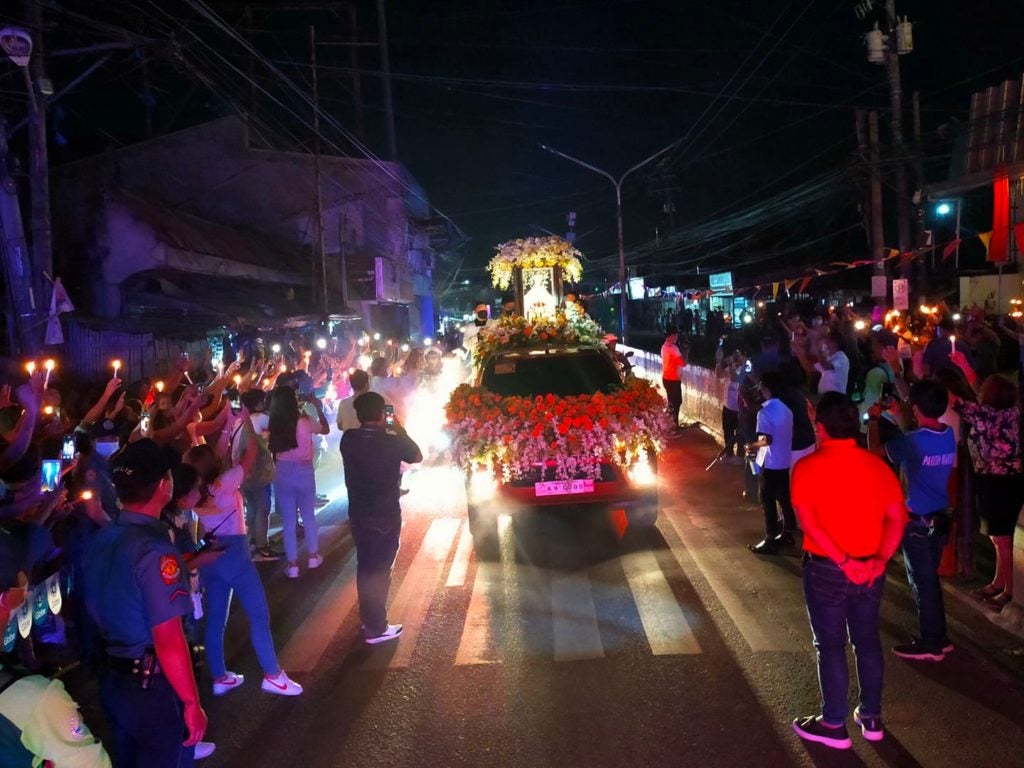 The St. Joseph the Worker Parish in Barangay Tabunok was the third stop for the mobile procession.  Devotees were singing the Gozos when the image arrived.

The mobile procession then traversed the 12 kilometer stretch of the Cebu South Coastal Road (CSCR) on its way back to Cebu City. Residents in the area, workers and motorists waited eagerly on the sidewalks.

At the South Road Properties (SRP), a tail of lights followed the Sto. Niño’s caravan as some vehicles attempt to join the mobile procession but they later on dispersed.

On its way to the St. Joseph the Patriarch Parish in Barangay Mabolo, residents occupied the sidewalks of M. J. Cuenco Avenue located along Barangays Sto. Niño, Tinago, Tejero, Lorega, Hipodromo, and Carreta with loud Sinulog music being played on the background.

Some chanted “Pit Señor” as they attempted to come closer to the mobile chariot. 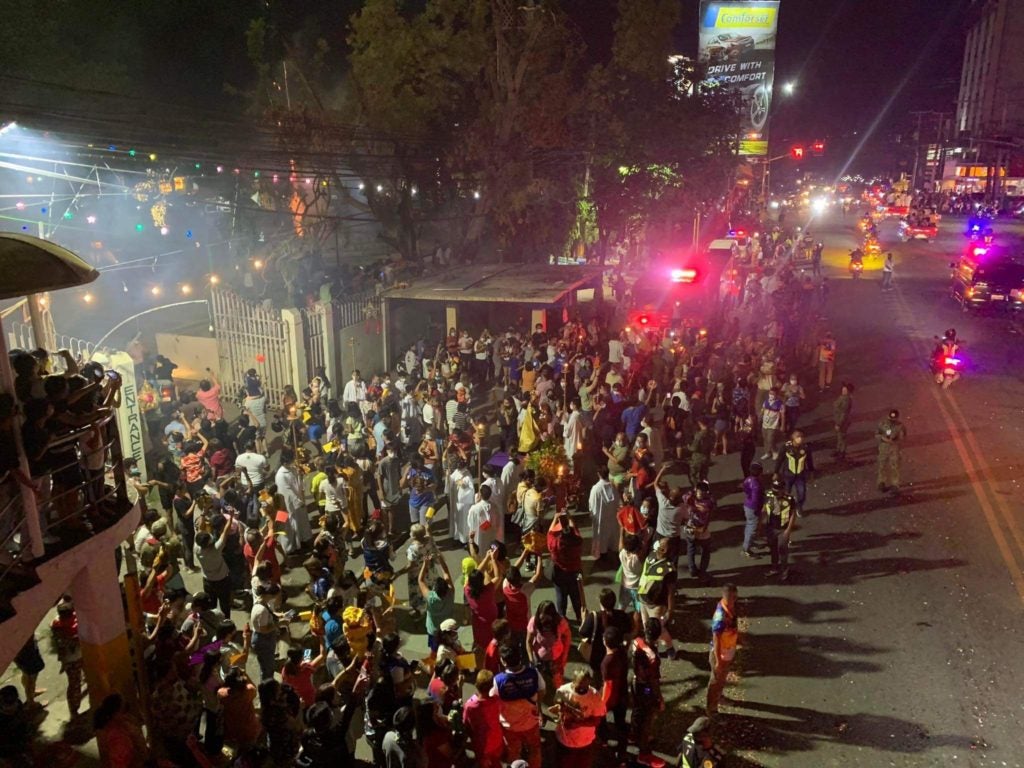 Devotees crowd the St Joseph the Patriarch Parish in Barangay Mabolo as they waited for the mobile procession to pass by the area. | Pegeen Maisie Sararaña

But the police managed to ask the devotees to move back and not crowd the streets to allow the mobile procession to pass without a hitch.

It was a few minutes before 8 p.m. when the procession crossed the Mabolo-Subangdaku border on its way to Mandaue City.

As the mobile procession drew near, the crowd of devotees waiting along the road until the vicinity of the National Shrine of St. Joseph grew even bigger. 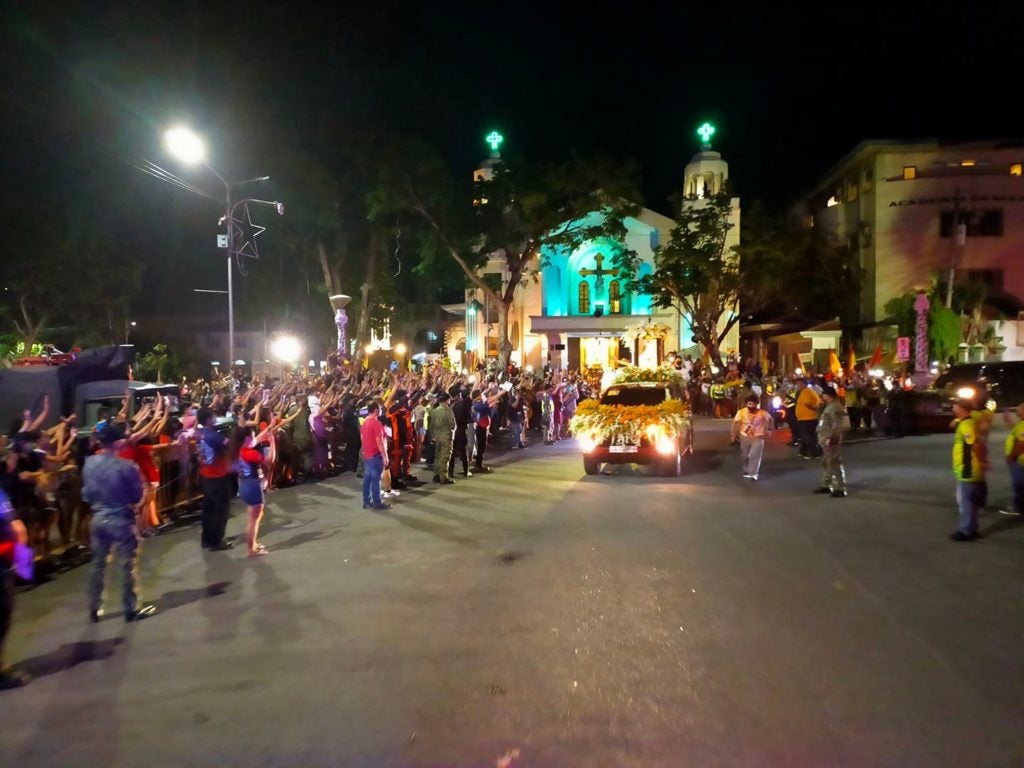 The mobile procession makes a quick stop in front of the National Shrine of St. Joseph in Mandaue City. | Delta Letigio

Mandauehanons, some of whom brought along their images of the Sto. Niño, waved their hands as they shouted “Viva Pit Señor!”

The mobile procession then left for Lapu-Lapu City and crossed the first Mandaue-Mactan bridge around 8:24 p.m.

Oponganons were waiting on the other side of the bridge. Right at the bridge’s landing on Lapu-Lapu City’s side, a huge crowd was waiting for the Sto. Niño.

People lined the streets until the vicinity of the National Shrine of the Nuestra Señor de la Regla. Devotees waved their hands as they shouted “Viva Señor Sto. Niño!”  The roads were also adorned with red and yellow flaglets.

A live bands was playing while performers danced their Sinulog offering.

Some residents, who opted to stay indoors to avoid the large crowd, peeked through their windows to wave their hands to the passing image.

Motorists waited at the intersections to pay their respect to the Holy Child.

Fireworks were lighted to welcome the Sto. Niño as the mobile procession reached the vicinity of Barangay Babag while petals were thrown at the passing image.

On its way to Cordova town, the crowd of eager devotees grew bigger. As the mobile procession made a u-turn at the San Roque Parish, a long line of Cordovahanons greeted the Sto. Niño as they all chanted “Pit Señor!” 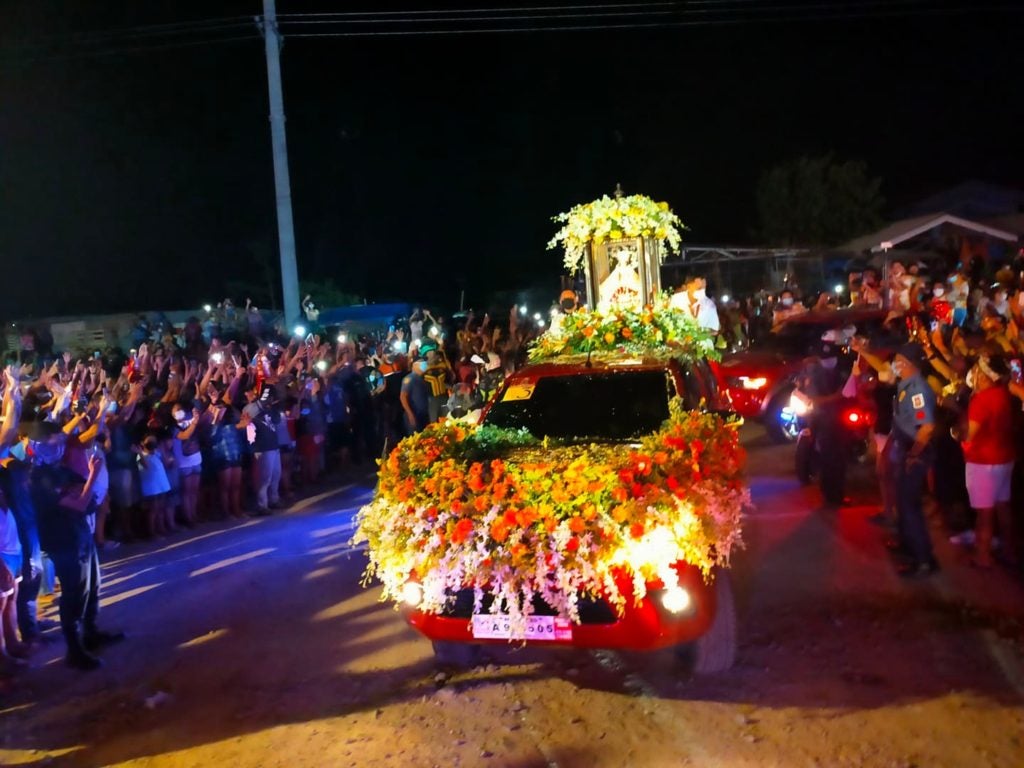 The crowd began to dissipate as the mobile procession headed for the Cebu-Cordova Link Expressway (CCLEX) for a historic crossing of the Cebu’s third bridge.

At around 9:22 p.m., the mobile procession started to traverse the 8.9 kilometer expressway. The huge cross on the third bridge was also lighted.

At 10:01 p.m. the Sto. Niño’s procession was situated on the middle portion of the bridge that will soon be named after the Holy Child upon its completion.

Bridge workers stopped what they were doing as they say their short prayers when the image passed. 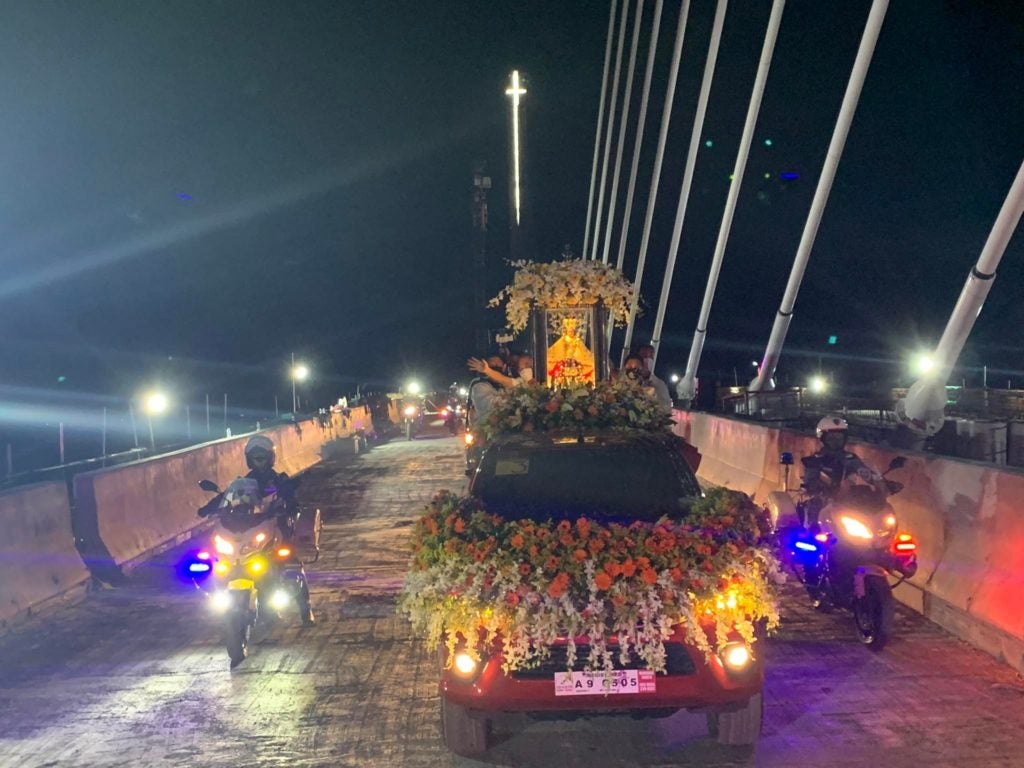 The procession reached Cebu City at 10:05 p.m. and headed back for the Basilica.

This time, a smaller crowd was waiting for the Sto. Niño’s return.  The image was then brought back to Basilica’s pilgrim center.

The almost four-hour long mobile procession that visited parts of the cities of Cebu, Talisay, Mandaue and Lapu-Lapu and Cordova town finally came to a halt at 10:29 p.m.. 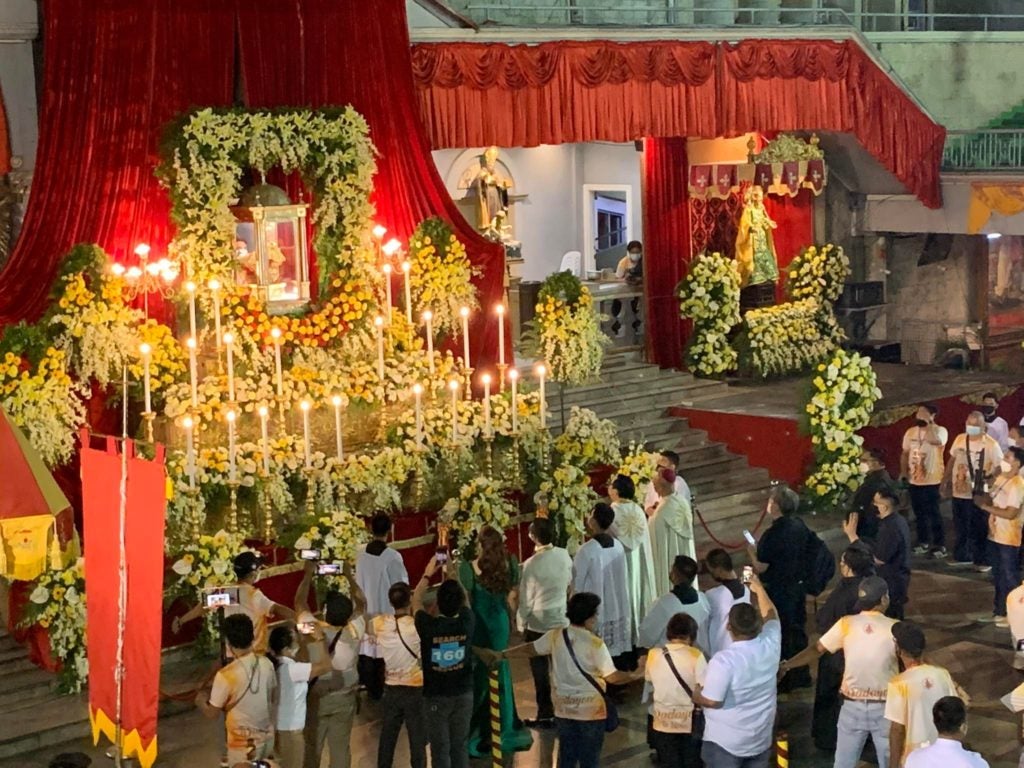 The Sto. Niño is returned to the Basilica Minore.

Cebu Archbishop Jose Palma thanked the Cebuanos for the success of this year’s mobile procession.

In an interview at the Basilica, the prelate said the faith of Cebuanos is overwhelming.

Read Next
Faith in the Holy Child prevails