One Cebu starts unveiling slate but no Presidential bet yet 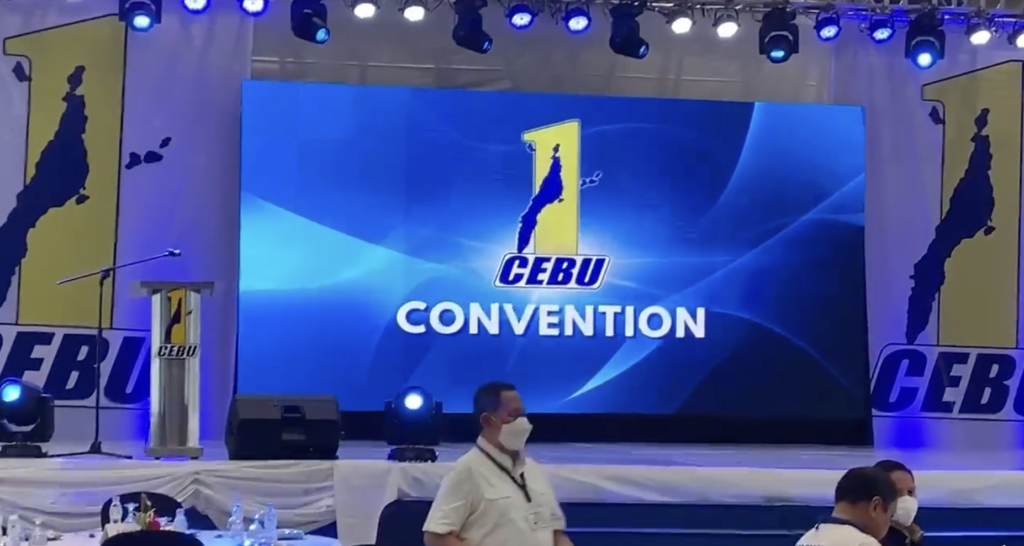 CEBU CITY, Philippines – Cebu province’s ruling party, One Cebu, is now gearing up for the incoming May 2022 Presidential elections.

One Cebu on Wednesday, January 26, launched its two-day convention at a mall in South Road Properties, unveiling the majority of its slate.

However, the group is still yet to formally announce which Presidential candidate they will be endorsing in this year’s polls.

One Cebu on Wednesday also formally introduced to the public its newest members, some of whom happened to be former political allies of their opponents.

Peter John is a reelectionist while Raymond seeks a seat in the Provincial Board, representing Cebu’s 2nd district.

The Calderon brothers also happened to be kins of the Duranos who will be fielding former Sec. Joseph Felix Mari ‘Ace’ Durano against Gwen.

Aside from the Calderons, One Cebu also introduced Tuburan mayoral candidate Democrito ‘Aljun’ Diamante, his running mate Danilo Diamante and their slate of councilors as their newest members.

Aljun and his brother, Danilo, will be running unopposed in Tuburan. During the filing of the Certificate of Candidacy (COC) last October, they declared themselves as independent candidates.

Some of One Cebu’s members not present during Wednesday’s activity are expected to show up this Thursday, January 27.

On the other hand, Gwen said One Cebu remains open to welcoming more members in the coming days.

“For the sake of unity, I will always, always be open to those who wish to join us in this goal to unite the entire Province of Cebu,” said Gwen in a speech.

“You see it would have been the easiest solution for me too, to try and remember those painful and dark days when a few us only remain. And then when we reestablish in the political scene, we see old friends come back. Nganong wala man ko mo dumot ug nganong wala man ko mapahinomdom sa kasakit nga akong gibati? Tungod kay adunay mga panahon nga gikinahanglan kita mosaka sa atong mga personal nga gibati alang sa atong pinalanggang Sugbo,” she added.

Cebu is the country’s most-vote-rich province, with over 3.2 million registered voters expected to cast their ballots this May 9, 2022. /rcg