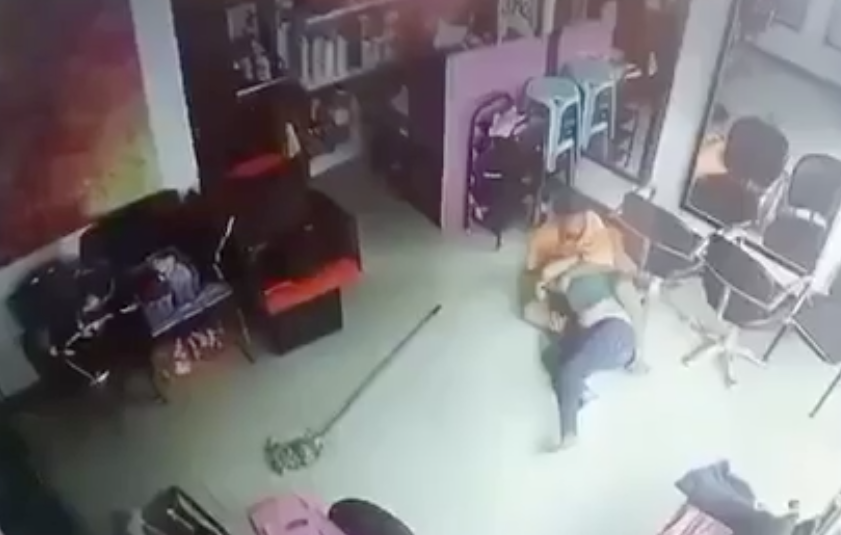 Here’s a screenshot of the video showing the mauling of a cashier of a salon in Mandaue City on Sunday morning, January 30, 2022.

Police Corporal Ceasar Garner Saraum of the Basak Police Station said the victim, Dianne Rae Gocela, is starting to recover but is still having a difficult time talking due to her injuries.

Gocela was robbed and mauled by Samuel Dumaguit inside the salon she was working in on Sunday morning, January 30, 2022.

The Basak Police Station here is set to file charges of robbery against the suspect on Wednesday, February 2, 2022. Another complaint for frustrated homicide is also being prepared.

Saraum said that the victim feels traumatized with what happened that she has a tendency to feel uncomfortable with men surrounding her other than her husband.

(Ever since she woke up, whenever she sees men, she sees the face of the suspect. She’s really scared.)

The incident also worried employees of the salon.

(We’re also scared even at night. If we’re here at night, we make it a point not to accept customers if no one is watching over us because we’re all girls here. Now, what happens is that if we close the shop, we go home together and no one opens without a companion. This is what we pleaded with our boss.)

Dumaguit stole P8,700 in cash from the salon and a cellphone.

Police Corporal Glenn Bordalba, the investigator, said they will check the suspect’s claim that he was just ordered by a certain “Junjun” Singco. But as of this posting, they have yet to trace or identify Singco.

Bordalba also said they offered to escort Dumaguit and his family if they want the suspect to undergo a psychiatric test to prove their claim that the suspect has a mental disorder.