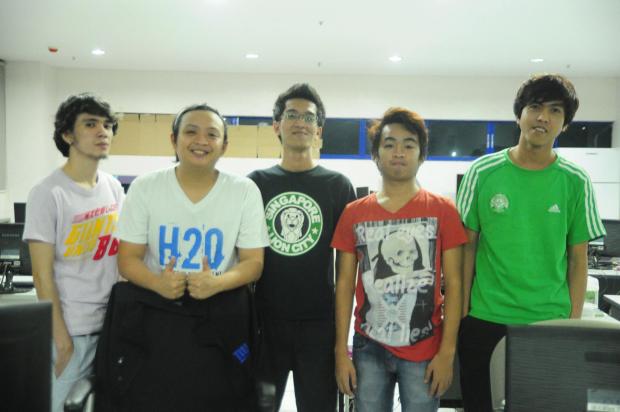 The crowd grew silent and tense as a humanoid bull carrying an otherworldly totem of power stalked his prey.

In an instant, the imposing creature leaped into battle and tore  the ground from beneath his target, a terrifying winged serpent. Creatures traded blows as magic spells soared through the air – and the crowd went wild.

Dota 2, a popular video game title of the Multiplayer Online Battle Arena (MOBA) genre, pits two teams of five players on opposing sides. They battle for control of map objectives through teamwork and fast fingers on their keyboards and mice.

Team Arcanys finished second during the Philippine qualifiers to secure a spot to compete here.

Team captain Heinrich John Abad, who goes by the in-game name of Arcanys. Heinrich, recalled the road that took them from simple game enthusiasts to professional gamers.

“I’ve actually been playing since Dota 1 way back in the early 2000s,” said the college student.

“I was also playing some other online games. I eventually switched to Dota 2 because I saw that there were more opportunities here.”

Professional gamers are backed by sponsors.

Heinrich and the rest of his squad are unique. Not only do they receive special freebies such as computers and equipment from software development company Arcanys, they receive paychecks as well.

“We have dedicated computers, high-speed Internet and an office space where we train daily, or whenever we have scrimmage matches scheduled,” said Heinrich.

“Other teams have to go to Internet cafes to train, using their own money.”

DAILY PRACTICE
Training days are long, with the squad essentially playing games of Dota 2 every day of the week at their office-training grounds at the 7th floor of the CFI building in the Cebu Provincial Capitol compound.

“We pretty much go to the office all the time because we have practice matches scheduled. Our only rest days are when we have no teams available to practice with,” said Marvin Salvador Rushton, also known as Arcanys.Boombox. They receive monthly salaries for their efforts.

“Our manager is looking at the long term,” says Heinrich.

“He told us: ‘You won’t be champion in two months or six months. We will help you become champions in two years.'”

“We can’t say how much we’re earning, but we can say it’s enough,” said Boombox.

“It’s definitely helped my parents understand that this is more than a game to me. It’s my career. It’s my first job since I graduated college last summer.”

When they started out their gaming careers, team members faced friction and opposition from family and loved ones.

“They think that professional gaming can’t support us for the future. I had to show my parents how much the gaming industry is earning and how much I can make before they accepted it,” said Boombox.

“Now, they see that I’m earning regularly they’re more open-minded. It’s more of a job for me, so they’re quite OK with it.”

Boombox, 21, recently graduated with a degree in Information Technology. Heinrich  is still finishing his college education.

“They’re really OK with my career as well because I have a job and going to school,” says Heinrich. The youngest team member is 16-year-old  Prince Enriquez (in-game name Arcanys.MightySavior).

Originally from Cagayan De Oro, MightySavior said he stopped schooling four years ago at the age of 12. “I’m doing well now from my career as a professional gamer. What I earn is enough,” he said.

LOCAL GAMING SCENE
Heinrich lamented that the lack of support in the Cebu gaming scene has led to  fewer teams actively participating and competing, which in turn poses a problem for their own squad. “Right now, there’s not a lot of opportunities here so the scene is quite dead,” he said.

“When you’re one of the best teams, the other teams no longer want to fight with you because they think they won’t be able to beat you. It’s like they don’t want to learn and step up their game.” “At the same time, they don’t have the time and money to keep practicing to get better. They don’t have the same support we do. They don’t have an office they go to everyday that lets them play on high-end computers to practice while getting paid. In turn, it’s bad for us. It’s hard to compete with international teams when we can’t practice with strong local teams,” he added.

Asked whether the team is looking to win the Asian championships and hopefully push for a The International 5 invitation next year, the team answered a collective and emphatic “Yes!”.

Although the Arcanys team squad expressed some level of confidence in facing other Filipino squads in the tournament, team captain Heinrich said that they can’t be complacent. “The one team we’re really worried about  is MVP.Phoenix from Korea. We haven’t had the chance to play them in scrimmage matches and they’re very strong,” he said.

“We just need to play our game and not underestimate our opponents.”