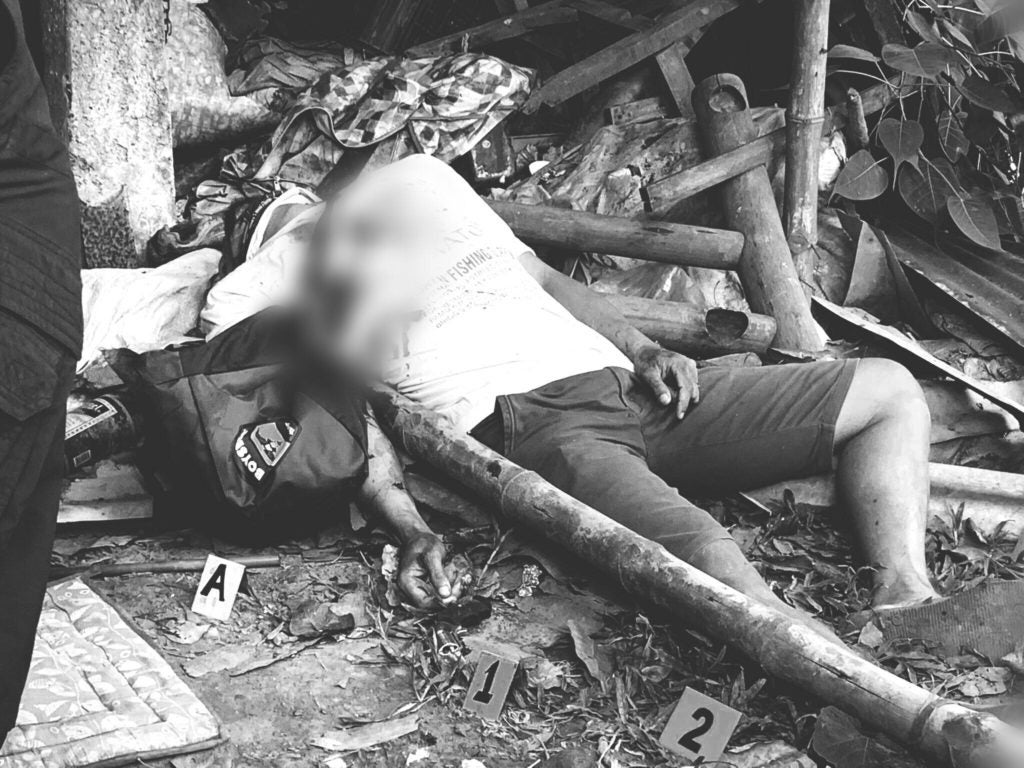 John Christopher Dejan a.k.a. Janjan Moko, the primary suspect in the shooting to death of a mother and her 15-year-old daughter was killed in Barangay Pasil, Cebu City during an alleged shootout with the police on Saturday, Feb. 5, 2022. / Paul Lauro

CEBU CITY, Philippines— The primary suspect in the shooting to death of a mother and her 15-year-old daughter was killed on Saturday afternoon, during an ‘armed encounter’ with pursuing policemen in Barangay Pasil, Cebu City, the police said.

Ironically, John Christopher Dejan a.k.a. Janjan Moko’s killing was not in any way related to the twin murders he allegedly committed but because of an armed person alarm that Fuente Police Station received on Saturday morning, said Police Major Armando Labora, chief of Fuente Police Station

Earlier, Police Major Jonathan Dela Cerna, chief of Guadalupe Police Station, said that they had already stopped their manhunt operation against the suspect because it was already beyond the reglementary period of 72 hours.

He added that they filed the double murder and frustrated murder complaints against the suspect on Friday, February 4, hoping that the court will issue a warrant of arrest while he was still at large.

Labora, for his part, added that it took them around three to four hours before they cornered the suspect in Barangay Pasil, Cebu City since he was reportedly very cautious in disclosing his identity.

Labora also said that the suspect even changed his clothes compared to what was caught in a security camera along F. Ramos, Barangay St. Cruz, while he was evading pursuing operatives of the Special Weapons and Tactics and the Regional Special Operations Group (RSOG-7).

When he was killed, the suspect was already wearing a white shirt while he was donning a colored shirt printed with the word ‘Sniper’ on it when he was caught in CCTV footage.

Labora said that the community played a key role in locating the suspect saying prompt action by concerned citizens enabled them to track him down.

Labora said they still need to conduct further investigation on the suspect’s alleged involvement in other crimes as he also debunked reports that Moko was a police asset of their station.

Labora also claimed that the suspect fought against the operatives resulting in his death. He said Dejan/Moko was armed with a 9 mm revolver when he engaged policemen in a shootout.

The gun, Labora said, was found in the crime scene.

He added that they will also check if the said firearm was the one used by the suspect in killing his live-in partner and a minor in Barangay Guadalupe last January 31.

According to some residents in Barangay Pasil, they heard three gunshots in the area but were afraid to investigate as there was an armed person alarm in their area.

Labora said that there is a possibility that Dejan/Moko knew someone in the barangay hence his decision to hide there.

CDN Digital tried to ask for comments from the family of the suspect but got no response as of this posting.

As reported earlier, police said they thought the suspect might surrender after they received a text message from his mother that he was planning to surrender to authorities.

Dejan/Moko was the prime suspect behind the gruesome killing of his live-in partner Jenelyn Bontilao and her 15-year-old daughter Hannah inside their rented room in Sitio San Roque in Barangay Guadalupe, Cebu City.

Bontilao’s 11-year-old daughter was also hurt in the incident and is now recuperating in a local hospital.     /rcg

Read Next
Roque: Guanzon’s dissenting opinion is now but a “scrap of paper”