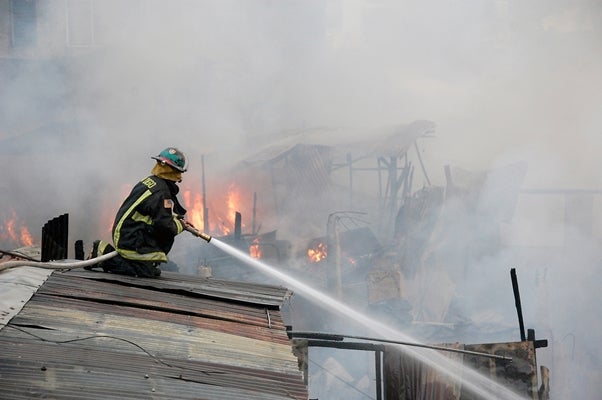 Some residents blamed 29-year-old Orlando Mendoza for starting the blaze after seeing him set fire to his room with a cigarette lighter.

Arson charges will be filed against Mendoza, who was detained in the Fuente police station.
His strange behavior was linked to allegations of substance abuse.

A total of 35 houses in the congested neighborhood were destroyed. Three others were damaged.
Roque “Junior” Dacal-dacal Jr., a habal-habal driver, said he was preparing his children for school when he saw Mendoza holding a lighter inside his room.

Dacal-dacal suffered slight burns but this didn’t stop him from punching Mendoza in anger during their confrontation after the fire.

Housewife Vicenta “Amay” del Mar, 37, said she saw Mendoza after he lit up his room.

“He went out of his house laughing. He even called out to a firefighter and helped lift a water hose,,” del Mar said in Cebuano.

Dacal-dacal’s 72-year-old mother, Maria, said the fire destroyed an P80,000 collection from their congregation that was entrusted to her along with P10,000 capital for her fish stall.She said she was supposed to deposit the money in the bank the next day.

Cebu City Mayor Michael Rama said the area will be cleared and reblocked so that narrow streets will be improved to allow firefighters easier access. Social workers will distribute food and supplies for three days. /With Chito Aragon and Jose Santino S. Bunachita