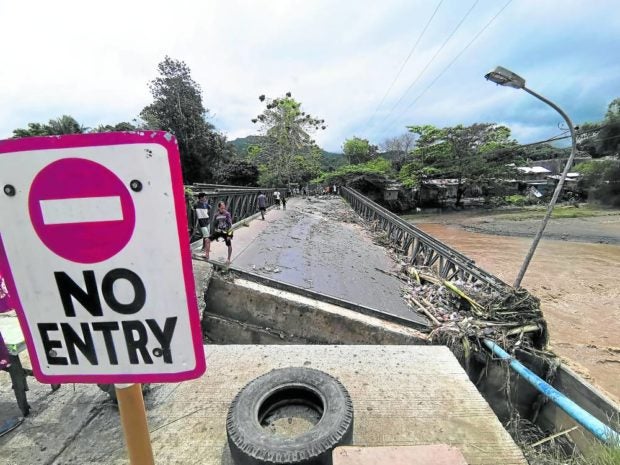 COLLAPSED | A steel bridge in Barangay Ubaldo, Iligan City, collapses on Sunday night after the soil along its approach loosened from the continuous heavy rains brought about by the prevailing low pressure area. —DIVINA M. SUSON

An initial report from the Iligan City Disaster Risk Reduction and Management Office (CDRRMO) on Monday placed those affected at 1,166 families coming from eight villages, where at least six houses were monitored to have been carried away by floodwater, following heavy rains that started on Saturday.

Water level rose as high as between 3 and 4 feet in at least two villages in the city, some affected residents reported.

The state weather bureau earlier issued an advisory about heavy rainfall over Lanao del Norte, and the cities of Iligan and Marawi, lasting until the early hours of Monday due to the LPA.

As of 10 a.m. on Monday, the LPA was spotted at 135 kilometers southeast of Hinatuan, Surigao del Sur. It had a low chance of developing into a tropical depression but would also bring heavy to intense rain over Caraga region (Agusan del Norte, Agusan del Sur, Surigao del Norte, Surigao del Sur and Dinagat Islands, and the cities of Butuan, Cabadbaran, Surigao, Tandag, Bislig and Bayugan), the Eastern and Central Visayas regions, and Masbate, according to the Philippine Atmospheric, Geophysical and Astronomical Services Administration (Pagasa).

The Iligan CDRRMO report did not include yet the 679 families (2,323 individuals) from Barangay Hinaplanon who evacuated to Tambo Central School during the height of flooding on Sunday night but had already returned home on Monday, said Veronico Echavez, Hinaplanon village chief.

Echavez said 80 families were trapped in Sitio Bayug Island at the height of the flash floods but were already brought to safety and were given aid by the local government.

Iligan City Mayor Celso Regencia suspended classes at all levels on Monday to allow families to clean up the debris. Works in government and private offices were also suspended except for personnel involved in public safety services, emergency response, medical services and disaster response, which needed to continue their operations.

Regencia announced in the memorandum on Monday that some major roads and bridges in the city were not yet passable due to landslide and flooding, while others were so severely damaged that they remained closed to the public and motorists.

As of 10 a.m., however, the Department of Public Works and Highways (DPWH) announced that the landslide debris that blocked the national highway in Tubod town, Lanao del Norte province, and Buruun village here had already been cleared.

In Barangay Palao, 250 families, or around 800 individuals, from five riverbank “puroks” (communities) were evacuated on Sunday evening, according to Jona Lyn Catampo of the Iligan City Social Welfare and Development Office.

Niez said that a steel bridge in his village was temporarily closed to vehicles after part of its approach collapsed, placing the damage at around P6 million.

He also said that part of the P1-billion flood control infrastructures and some P1.6 million worth of foot bridges in the city were damaged by the floods.

The steel bailey bridge in Merila, Barangay Ubaldo Laya, which links to C3 Road that leads to Iligan City, was also initially closed for repair. The bridge collapsed when the soil along its approach loosened up at the height of the flooding.

Aly Khan Ali, district engineer of the DPWH Second Engineering District here, said his personnel began clearing the landslide in Sitio Timoga in the village of Buruun as early as 9 p.m. on Sunday.

The bridge that connected the village of Mahayahay and Tubod town was temporarily closed to allow the DPWH maintenance team that was still clearing the area of mud flow and debris before it was reopened at 10 a.m. on Monday, the DPWH reported.

Iligan Light and Power Inc. also dispatched a team to restore the concrete pole that was about to topple and could cause a blockade along Suarez National Highway if left unattended, said Kennan Eregbuagas, the utility’s power supply and key accounts unit head.In Lanao del Norte, the towns of Kauswagan and Linamon conducted a preemptive evacuation as early as 5:30 p.m. on Sunday to prevent casualties.