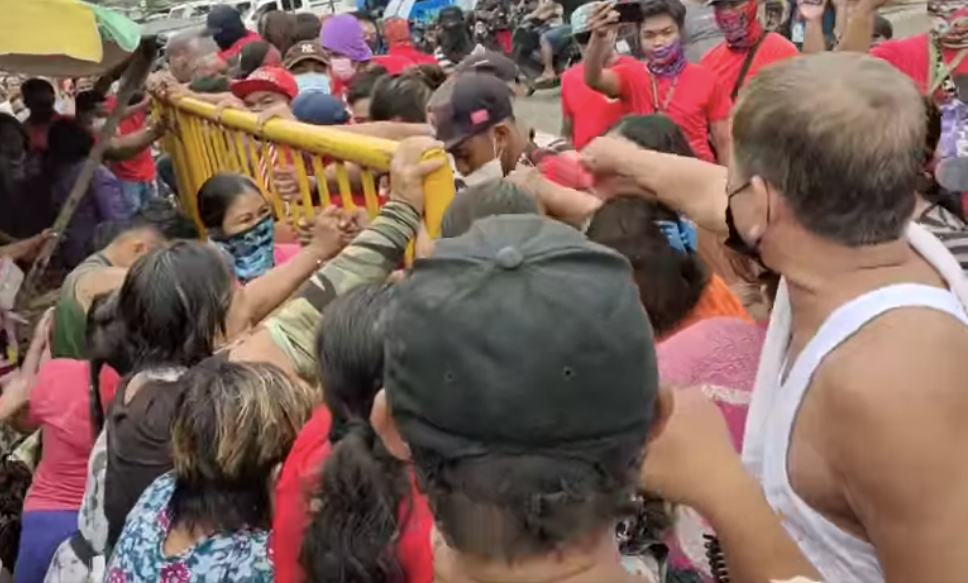 CEBU CITY, Philippines — Tensions heat up in the Carbon Market while Cebu City Mayor Michael Rama is yet to sign a supplemental Memorandum of Agreement (MOA) to cure the Joint Venture Agreement (JVA) the city has signed with Megawide Construction Corp. for the Carbon Modernization project.

On Friday, March 11, 2022, Carbon Market vendors stopped the putting up of yellow railings along Quezon Boulevard in the belief that it was an attempt of the Market Authority to close off the Bagsakan in Unit II.

The area was where ambulant vendors refused the renovations for the Bagsakan as a protest to the Carbon modernization program that they insist to be a form of privatization of the public market.

In videos posted by Carbon-hanong Alyansa, the main oppositionist to the project, vendors, and residents of the Carbon Market complex pushed back the yellow railings.

This as vendors refused to allow the installation and after nearly an hour of the vendors pushing back, the Market Authority personnel pulled out.

In a phone interview with Market Authority head, Racquel Arce, she told CDN Digital that the yellow railings were part of the renovation of the Bagsakan so that ambulant vendors will no longer sprawl out on the streets.

The aim of the yellow railings, she said, was to keep vendors in the Bagsakan Market and serve as a demarcation line between the road and the sidewalk.

Other portions of Carbon Market including the Unit III fruit section has similar yellow railings.

The Market Authority head said that the vendors strategically placed the vulnerable individuals in front of the personnel as a human shield knowing that her men would never exert strength against them.

For now, Arce has postponed the installation of the yellow railings to pacify the protesting vendors.

Arlene Subing-subing, one of the vendors who joined the human barricade said they no longer believe the “lies” of the city government.

She said that for weeks now, construction of the Bagsakan stalls continued at night to avoid being seen by the vendors.

The new stalls were part of the deal between Megawide and Cebu City to rehabilitate Unit II before the construction of the actual new Carbon Market at Freedom Park and Warwick Barracks.

The yellow railings were just a front to continue the construction and “force the vendors out.”

Ann Ariosa, the spokesperson for Carbon-hanong Alyansa, said they can no longer trust the city government as the city is determined to privatize the market.

This was already denied by Mayor Rama as he said the ownership of the market will still be under the city government despite being developed by Megawide.

It can be remembered that the City Council has requested all constructions in the market be stopped until the Council can approve the supplemental MOA.

Rama has not heeded the request of the Council yet.

Ariosa also denied that the vendors placed children and pregnant women in danger during the Friday incident. She claims that these individuals were emotional and pushed back the railings because the railings were infringing on their stalls and goods.

Ariosa said that Mayor Michael Rama, who is seeking a mayoral post in the May 13 elections, should face the vendors and deliver his promise of an MOA instead of insisting on the construction.

She added that Carbon-hanong Alyansa will continue to support the vendors and be their voice in this continuous struggle against “privatization.”       /rcg