A mini bus driver and a kitten named Ayala 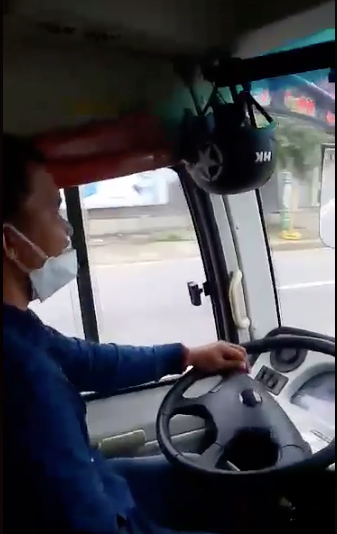 Ayala loves to stay inside a helmet hanging near the windshield in the mini bus driven by her fur-father Joel Basallote, who plies the Ayala- Mandaue route daily. | Doris C. Bongcac

While he drives the mini bus, a kitten would either sleep on his lap or roam around the vehicle to play.

And when its time  to urinate or poop, the kitten called “Ayala” would just “meow” to call Basallote’s attention or hop into her “comfort area,” a transparent plastic container with sand inside.

The kitten has gotten used to this kind of life as she would prefer to join Basallote, 34, at work instead of staying at home.

(If she notices that I am already headed for work, she would start to cry so I decided to bring her along with me.)

WATCH: This air-conditioned mini bus is her playground.A two-month-old kitten called Ayala, who was named after the place, where her fur-father Joel Bassalote found her, would roam around the bus and play with whatever would catch her attention while Basallote would ply the Mandaue-Ayala route.She would only start to “meow” when she starts to feel hungry or when it's time to urinate or poop. via Doris Bongcac #CDNDigital

Their bond started when Basallote found Ayala beside the body of her already dead mother as he was about to take his breakfast on a roadside food store located across the Ayala Terminal at the Cebu Business Park sometime in January 2022.

This was also the reason why he named his pet Ayala, which is the name of the place where he found her.

(I felt pity for her that I was unable to immediately take my meal. I then took her and bought her milk.)

(I thought that maybe if I would take care of her, and if she will be well and survive that will be great.)

He said that he immediately bought milk for Ayala.  And when she started to grow a little bigger he started to give her cat food.

Now that she is already two-months-old, Ayala is starting to share Basallote’s meals especially if he is having fish for his viand. (She joins me when I eat.  Even if she is asleep, she would wake up in time for our meal.  She has started to develop this habit.)

Ayala was already the 10th cat that Basallote adopted in the last few years.  He rescued all of his pets from the sidewalks of Metro Cebu.

He recalled having rescued a cat while he was waiting for his turn to get fuel from a gasoline station in Mandaue City.

And Ayala is his youngest rescued cat. The nine others were already adults when found.

To care for his cats, he would normally buy a sack of cat food for their meals. Sometimes he would also feed them with homemade meals.

(I set aside money for my cats because I pity them.)

Basallote said he had a soft spot for cats because he considered them as helpless animals especially the young ones.

(Unlike dogs, I have a soft spot for cats because they cannot always fight back [when attacked] because they are smaller.)

To date, he now has four of his 10 rescued cats in his home in Mandaue City.  One of his pets already died and was buried on their backyard while the others may have left to find a mate and lost their way back home.

And since Ayala is the most fragile from among his pets, he makes sure that she is getting extra care and attention.

Basallote said that Ayala, whom he keeps inside a cat cage when they are at home to prevent the bigger cats from coming near her, would also wake up when he would wake up at 4 a.m. to prepare for work.

She would then have a bottle of milk for breakfast while he would drink his coffee. Mini bus driver Joel Basallote makes sure to bring a bottle of milk for his pet cat when they leave for work. | Doris C. Bongcac

Basallote would also prepare another bottle of milk to take with them to work and some cat food.

When it is time to take his break from work, Ayala will share his meals with him.

While they wait for passengers at the terminal, Ayala would normally lie down on his lap to play and later on fall asleep.

Ayala would just continue to sleep on his lap and sometimes under his sweatshirt to enjoy his body warmth.  And when she is awake, she will play where he will see her.

At some point or when she gets bored, Ayala would start to roam the bus and play under the seats. Ayala plays as if the bus was her playground. | Doris C. Bongcac

(If there are passengers who will be startled by her, she will tease them more.  She would start to play with their shoelaces.  But if my passengers do not seem to mind her presence, she will just continue to play on her own.)

And when the mini bus starts to become full, the bus conductor would interrupt Ayala from her play, pick her up and hand her over to Basallote.

Basallote would then place Ayala on a helmet that he had hanged near the windshield of his bus to keep her safe and to prevent passengers from stepping on her.

This cute kitten is starting to gain popularity especially among Basallote’s “suki,” most of whom are working at the Ayala Center Mall and other nearby establishments and who would get their ride at the Ayala terminal.

Some would even ask for her whereabouts if they do not see her as soon as they board Basallote’s bus.

And others just could not help but play with they are onboard the mini bus.

WATCH: If you like animals, please consider making my cats famous