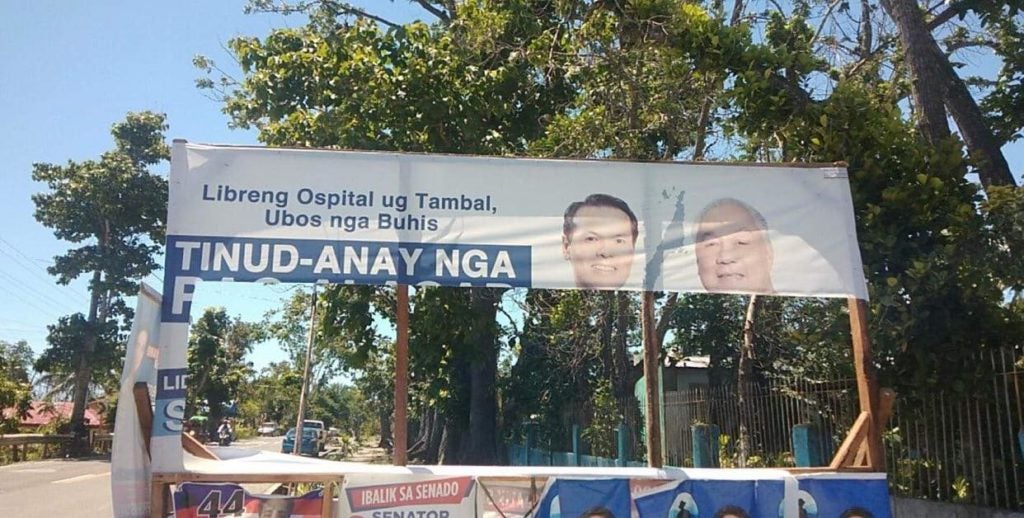 The camp of Cebu gubernatorial bet Ace Durano and Vice Gov. Hilario Davide III is now offering a reward to anyone who can show videos or photos of individuals taking down tarps propped up by their supporters.  | Contributed Photo

CEBU CITY, Philippines – The camp of Cebu gubernatorial bet Ace Durano and Vice Gov. Hilario Davide III is now offering a reward to anyone who can show videos or photos of individuals taking down tarps propped up by their supporters.

This developed after they received reports from supporters that tarps showing the two bets, placed in various locations in the province, were destroyed.

“We’re really saddened by this kay some of our tarps are put up by supporters themselves. Ang uban ilaha gyud gasto. Ila gyud ni gihagoan,” said Aldwin Empaces, campaign manager of the Durano-Davide tandem, in a statement.

Empaces, in turn, said their group will be dangling a reward to anyone who can show photos and videos of people forcibly taking down the tarps of Durano and Davide.

“Pero mag-amping lang gyud kay dili sad mi ganahan that our supporters will get into trouble when they take these photos. We dont want trouble, but we also want fairness. So ang pinakamaayo, kining mag sigeg panglangkat, undangon nalang gyud unta,” he pointed out.

This is not the first time the camp of Durano and Davide cried foul over torn tarps. In 2021, they also called out individuals for taking down tarps of the tandem.

Meanwhile, Empaces reiterated their calls for fair and honest elections. They also urged supporters not to resort to damaging campaign materials of opposing candidates.

On the other hand, the camp of Durano and Davide assured their supporters that they will not be deterred by these developments.

“Pero bisag unsa paman, we thank all the supporters of the Durano-Davide who continue to fight with us and this will not stop the Team ACED sa pag paabot sa mensahe for #AbetterCEbu, said Empaces.

Durano, a former Cabinet official during the term of ex-President Gloria Macapagal-Arroyo, will be challenging incumbent Gov. Gwendolyn Garcia for the province’s highest elective post.        /rcg

Read Next
Is relative to blame for siblings’ drowning in Sibonga? Police want to know