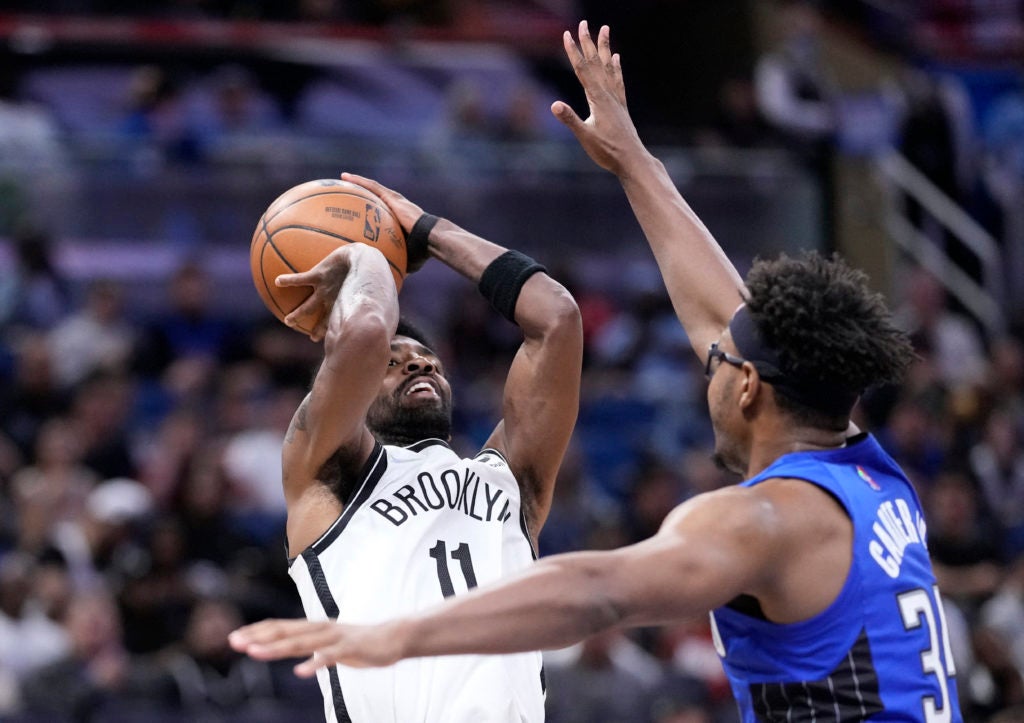 Kyrie Irving of the Brooklyn Nets shoots the ball against the Orlando Magic in the first half at Amway Center on March 15, 2022 in Orlando, Florida. | AFP photo

Los Angeles—Kyrie Irving scored a career-high 60 points in a dazzling display as the Brooklyn Nets stretched their NBA winning streak with a 150-108 thrashing of the Orlando Magic on Tuesday (Wednesday, March 16, 2022, Philippine time).

Nets star Irving — who had bagged 50 points last week in a victory over Charlotte — delivered another performance for the ages against an outclassed Magic at Orlando’s Amway Center.

Irving’s tour de force surpassed his previous career best of 57 points, set in 2015 while playing for the Cleveland Cavaliers in a victory over the San Antonio Spurs.

The 29-year-old Australian-born seven-time All-Star made 20-of-31 from the field, making eight of 12 attempts from outside the arc.

A career-high performance for Irving looked inevitable after an explosive first half from Brooklyn.

The Nets piled on 48 points in the first quarter alone before adding 38 in the second quarter to lead 86-56 at half-time.

Irving contributed 41 points in that devastating first half, leaving him only 16 shy of his individual record.

He brought up 50 points — the sixth half-century of his career — with a driving layup in the third quarter, prompting appreciative chants of “Kyrie, Kyrie” from the Orlando crowd.

Two free throws saw him reach his record at 57 and then a magical three-point pull-up from 26 feet saw him hit the 60-point mark.

Irving’s points haul came 24 hours after the Minnesota Timberwolves’ Karl-Anthony Towns scored 60 in a victory over the Spurs.

It is the first time different players have scored 60 points or more on consecutive nights in the NBA since 1962.

Brooklyn’s fourth consecutive win saw the Nets improve to 36-33 to keep their hopes of an automatic playoff berth alive. The Nets are eighth in the Eastern Conference, three wins behind the sixth placed Cavaliers.

Orlando meanwhile remain rooted to the foot of the Eastern Conference with an 18-52 record.

Read Next
Vaccine hesitancy still an issue for Lapu seniors