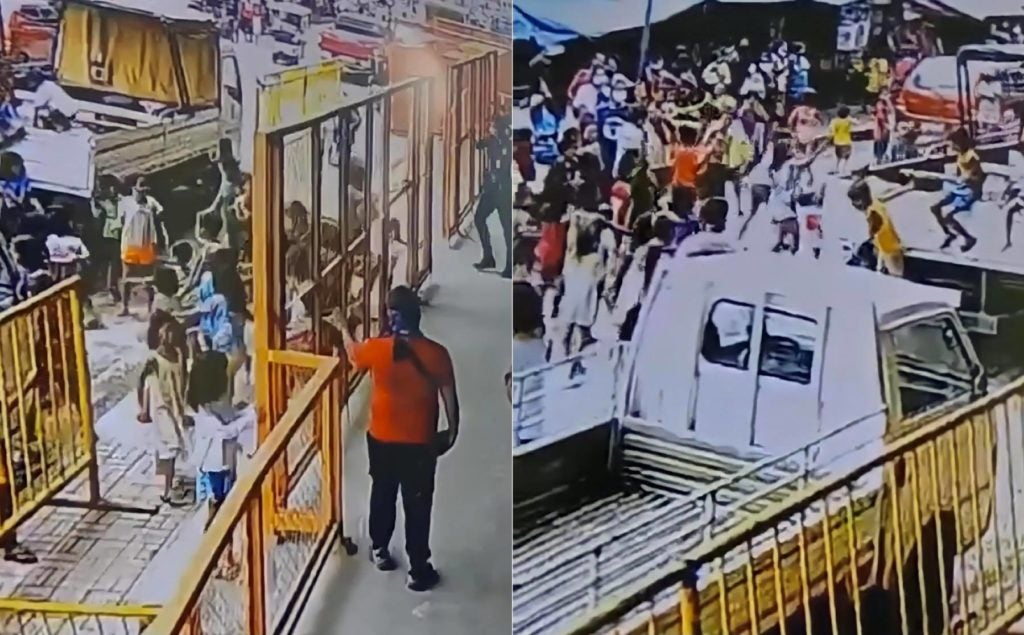 These are screenshots of a video taken during the March 11, 2022 commotion between the Cebu City market personnel and the Carbon market vendors, who allegedly used kids as human shields during the incident. | screenshot of the video courtesy of Councilor Joel Garganera (file photo)

CEBU CITY, Philippines — The Commission on Human Rights in Central Visayas (CHR-7) will be investigating the incidents at the Carbon Market where children were allegedly used as human shields by vendors to push back market personnel.

The City Council has requested the CHR-7, the Department of Social Welfare and Development (DSWD), Cebu City Police Office (CCPO) Women and Children’s Desk, to investigate the matter as they suspect that groups may have deliberately used the children during the protests.

In a statement to CDN Digital, Lawyer Arvin Odron, director of CHR-7, said that they had yet to receive the formal complaint or request from the City Council but they would look into the incident.

“We haven’t received any formal request yet from the city council. Nevertheless, the information that minors were being used as shields during the commotion is a serious breach of the rights of our children, which we ought to protect due to their vulnerability.

“Children should not be exposed to violence or threat that endangers their lives and limbs. Should the parents or guardians fail to perform their obligation to protect their wards, that’s the time the State may step in as parens patriae and prosecute the violators. Definitely, we will look into this, and investigate the matter,” said Odron.

The CHR-7 also welcomes any information the City Council can provide to help shed light on the matter, especially since the safety of children is currently at risk.

Odron said in a subsequent phone conference with reporters that he has directed an investigator to look into the issue and handle the case.

The minors are considered a vulnerable sector and if individuals such as parents or even groups are proven to have exploited the children for their own gain during the March 11 and March 21 Carbon Market clashes, they may face charges of child abuse.

“Kung intentional nga gigamit sa mga parents, exposing their children to threat of violence gihimong human shield, that is a blatant disregard of their rights. Ato nang imbestigaran para atong makuha ang side sa mga bata, because children also have the right to express their opinion, but they should not be put (on the) front line threatening their lives,” said the regional director.

(If the parents’s use is intentional, exposing their children to threat of violence, they were made into human shields, that is a blatant disregard of their rights. We will investigate that so that we can also get the side of the children because children also have the right to express their opinion, but they should not be put (on the) front line threatening their lives.)

Still, Odron assured the public that they would investigate the incident thoroughly and would follow due process. After all, children also have the right to express dissent against the policies of the government.

The parents of the children involved and the vendor groups behind the clash may be summoned to explain their side.

Carbon-hanong Alyansa said in a phone interview with CDN Digital that they would cooperate with the investigation of the CHR-7 as they would want the public to know that the vendors would never put their children at risk.

The Carbon-hanong Alyansa is a group representing the Carbon Market vendors who have consistently opposed the joint venture agreement (JVA) of the city government.

Ann Ariosa, spokesperson of Carbon-hanong Alyansa, said that the children voluntarily joined the protest on March 11, 2022, because they heard that if they would not allow the yellow railings to be installed, their stalls and homes would be burned.

This prompted the vendors and residents nearby to push away the market personnel at that time. The children joined in their own accord as a way to protect their homes.

(We did not use the children. Even in our protests at city hall, we always ask the children to leave just in case they might be caught in the middle if there might be trouble. There is nothing we can do if the children voluntarily joined (the protests) because they were sad about what happened.)

Ariosa hopes that the investigation of the incident would not divert the attention of the city government from the true plight of the vendors, which would be the “deficiencies” of the JVA signed by the city with Megawide over the Carbon modernization program.

The Carbon-hanong Alyansa said they hoped that the City Council would focus on curing the JVA instead of deviating from the issue to avoid tackling the main problems of the project.

The Child and Youth Welfare Code